The Expendables 2 was a blast. Much, much better than the first one. So let's start by just naming off the cast to this thing. We've got Sylvester Stallone, Arnold Schwarzenegger, Bruce Willis, Jason Statham, Chuck Norris, Jean-Claude Van Damme, Jet Li, Dolph Lundgren, Terry Crews, Randy Couture, and then some guy named Liam Hemsworth. So, yeah, pretty stacked roster for the second outing of this new franchise, and this time they definitely deliver the goods.

I joked at the trailers when they flashed Liam Hemsworth's name that "one of these things is not like the others", yet he honestly holds his own with the rest of these big name action stars. He really impressed me during his scenes, and in fact his performance was one of the standouts of the whole movie. So who knows, maybe this franchise will be the starting point to launch a career for him, and we've got a whole new action star in the making here.

As for the rest of the guys, they don't disappoint, either. Jet Li is actually allowed to look good, though his role in this movie is more of a cameo than anything else. But considering how much of a joke they made him out to be in the first one, I didn't have too big a problem with them letting him bow out gracefully early on before they had the chance to repeat that mistake. He's then replaced by Yu Nan, who plays the Chinese agent Maggie, because apparently there's only room for one Asian at a time on screen in this franchise.

Stallone and Statham both do their thing, and Lundgren's been relegated to pretty much pure comic relief. But we actually do get to see a little bit more from Crews and Couture this time around. Couture's acting still leaves much to be desired, though it's an improvement from the first movie, and he actually walks away with the funniest one-liner in the whole movie during a conversation over what their last meal would be. Schwarzenegger and Willis' roles are extended from the last film, and you can just see in their faces how much fun they're having here. They make reference to a lot of these stars' prior films, such as The Terminator, Rambo, and Die Hard, and while these moments are definitely eye-rollers, I still admittedly got a bit of a kick out of them.

And as for newcomers to the franchise, Chuck Norris comes walking on screen with his meme fully intact (seriously, they actually had the nerve to throw in a Chuck Norris joke), but the big standout was Jean-Claude Van Damme, who plays the villain this time around. And my god is this guy bad ass. He actually feels like a legitimate, menacing threat every time he's on screen, which, you know, kinda makes sense. I mean, he's freaking Jean-Claude Van Damme!

So the story is... well, who cares really? Nobody's watching this thing for the story, it's all about the action. And there's no super awkward emotional moments, such as the five minute uber close-up on Mickey Rourke's ugly mug from the first one, where they try to force the theme of the movie on us and get us to take things seriously. Nah, this one scraps all of that nonsense and goes right for the jugular. The action is bloody and thrilling. And while there isn't any one single moment that's quite as exciting as the Terry Crews mow down from the first movie, as an overall experience, this movie is much more satisfying, and it's all because of one major reason: No shakey cam.

That's right, they finally learned. Shakey cam single handedly ruined the first movie, taking all of their super intense action sequences and rendering them entirely pointless by the sheer fact that we couldn't actually see any of that intense action that was taking place on the screen. And it was my biggest worry going into this one, but thankfully shakey cam is nowhere to be seen here. All of the action is clear as day for us to enjoy in all its explosiony glory. Most of it is basically just your typical shoot 'em up style of action, but there's several other fight scenes that were also very exciting. Jason Statham fights off a slew of men, dressed as a priest in a church, in which he uses knives and chains to battle 'em off in divine fashion. And we're treated to an awesome, bloody brawl between Stallone and Van Damme, which I found to be very enjoyable.

So yeah, this movie delivers on the promise that the first movie didn't quite live up to. It's not a perfect movie, and honestly, when compared to such movies as The Raid, it's not even the best action movie of the year. But The Expendables 2 is still a very fun (and very funny) movie, and one that's definitely worth checking out for any fan of the genre.

Oh, yeah, and since this is still supposed to be Cat Every Day August... 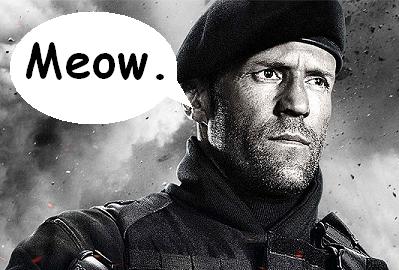