I've been doing these Best of Year in film lists for every year since 2009 now. At the end of the year, I pretty much rank my favorites, usually in a Top 10 list, and I may or may not briefly explain why the movie placed where it did. However, these lists really only reflect my feelings at that particular moment in time, which typically tends to be right at the tail end of the year in question. And as time continues to pass, my opinions on those films also continues to evolve as well. Some movies sit better with me in the months and years that follow. Others kinda become forgettable to me. And as such, if I were to redo these lists today, they'd almost certainly look quite different from how they appear in their preserved posts.

So today, I wanted to do just that, and take a look at some of the more drastic differences I would make to these lists. I'm not going to be re-ranking the whole thing, mostly just pointing out instances where certain key movies may have slid either up or down the list, and why that may have been. So to start off, let's go back to my first Top 10 Movies of the Year list that I posted here, and take a look at the year 2009: 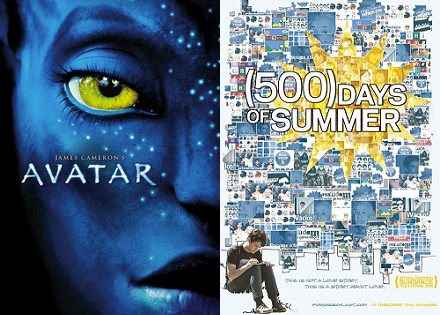 The interesting thing about this one is that the movie I'd place at #1 here is a movie that I hadn't even seen at the time of posting. In fact, I hadn't seen it until several years after the fact. But that movie is (500) Days of Summer, which absolutely floored me when I finally got around to it, and has since become one of my favorite movies of all time.

So yeah, it'd easily take top honors for the year were I to redo this list today. But that's not to say that my listed #1, Avatar, would merely slip down to the #2 spot. In fact, it's possible that, if I were to put together a new list today, Avatar wouldn't even get ranked at all. I loved the movie when I first saw it in the theater. However, after revisiting it on DVD, it did not hold up. At all. And it's honestly the only example I can even really think of where I was so impressed by a movie in the theater, only to turn around and watch it at home, and not feel even the slightest bit impressed by it at all. But that's what happened, and that's why today it would slip right off the list for me. 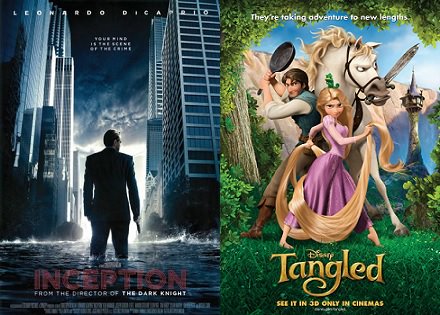 This is one where I've gone back and forth with it a couple of times. The current list shows Inception at the #1 spot. However, there have been times where I've actually retroactively bumped Tangled up into that spot, which as you can see on the original list, was ranked #5 at the time of posting. Tangled actually had an opposite effect on me as Avatar, where revisiting it at home actually increased my appreciation for it, as my theater experience was a distracting 3D showing, and without that distraction at home, I was really able to be swept away by the emotion of the film.

That said, I've since placed Inception back in the top slot for the year, as it really does stick with you, and its influence on the medium is just impossible to ignore. But rest assured, Tangled continues to sit securely in the #2 spot, and could easily find its way back up top for me on another day. 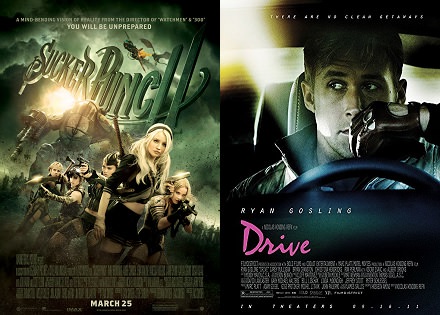 At this point, if ever there was a year where my top pick of the year should've been a tie, this would've been it. Ask me on any given day what my #1 movie of 2011 is, and I'll give you a different answer. At the time of the original posting, I went with Sucker Punch. However, as you can see in my list of the Top Movies of the Decade So Far, Drive had slid past Sucker Punch in that instance. And it's sorta been back and forth and back again for me with those two in the years since.

As of right now, I'm currently leaning more towards Sucker Punch as the #1 film of the year again. But ask me in another month or so, and it's very possible that Drive will slide right past it again, if only for a little while. I just love those two movies, for entirely different reasons, but they've both really managed to stick with me in an equally strong manner. 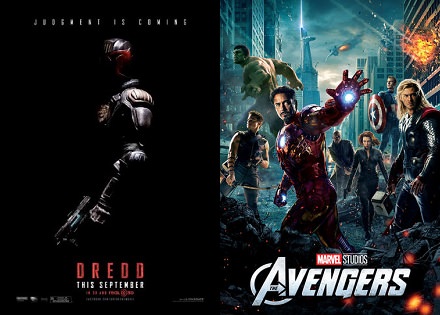 This is a year where the #1 spot actually hasn't changed at all. Dredd's spot at the top remains quite secure there for me, as even now, nothing else from the year even comes close to it. However, where I might alter the list would be as it concerns The Avengers, which at the time of the original posting was ranked at #4. Nowadays, I could easily slide it up to the #2 spot and think nothing of it. But yeah, otherwise, not much else I would really put too much thought into altering from this particular year, so moving right along. 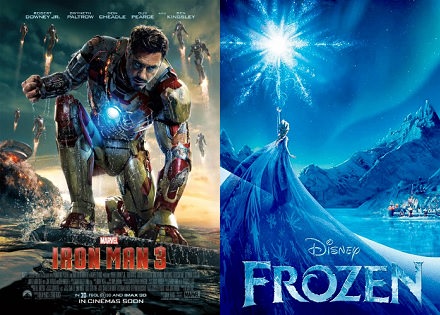 This is probably the most notable year for me where clearly I got it wrong at the time of posting. As you can see, I listed Iron Man 3 as the #1 movie of 2013. And the movie it bested out for that slot? Yeah, it just so happens to be none other than Frozen. So, for those of you who've been following me for some time now, you likely see the error there already.

Obviously Frozen has since retroactively become my #1 for that year. Hell, I also listed it at #1 in my aforementioned Top Movies of the Decade So Far, whereas Iron Man 3 didn't even receive an honorable mention there. And I'd also now consider Frozen to be my personal #1 favorite movie of all time at that. All things that hadn't become apparent to me until months after the posting of that year's list. So yeah, definitely the most glaring instance of me getting it wrong at the time of posting, which really just goes to show precisely how greatly one's feelings towards these movies and how we'd personally rank them can continue to change over time, the more they really sit with you. 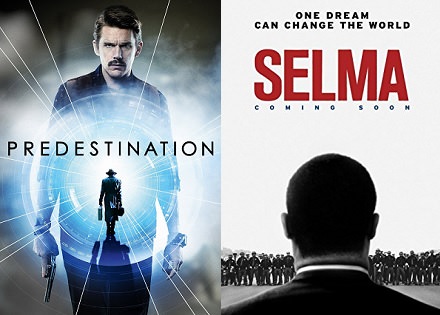 As you can see, this is the only year where I only did a Top 5 list, as opposed to the usual Top 10. That's because I personally felt 2014 was a pretty weak year in film, and at the time of posting at least, despite all of the films that I had seen in that year, I didn't personally feel enough of them were great enough to warrant being listed when it came time to do my end of year rundown.

Now, while my #1 choice, Interstellar, hasn't changed, what has changed is that I feel that I now have seen enough truly great movies from that year to warrant doing a full Top 10. And what's especially silly is that it only took less than a month after the time of posting for that to happen, when I was able to see the movies Predestination and Selma. Neither of them were available to me at the time, but after I was able to see them, I felt that they were both not only worthy of the list, but hell, they'd both probably crack the Top 5 for the year at that. This year was certainly the greatest argument for why I should probably wait until sometime in January to actually post these lists, but alas, I find the tradition hard to break after all this time. 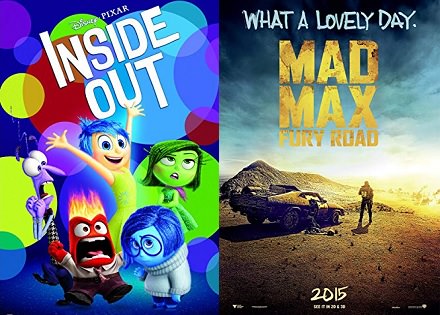 My listed #1 is Inside Out. And I still love and adore this movie. However, listed at #3 is Mad Max: Fury Road, which is a film that I've only grown to admire and appreciate more and more over the years since. So much so that, similar to my 2011 example, depending on what day you ask me, I may actually consider it my new top pick for the year 2015.

As I said though, I still love Inside Out. But if I were to do an updated ranking for my Top Movies of the Decade So Far, if I'm being honest, I'm not so certain it would make the cut for such a list. However, that same thing can't be said for Mad Max: Fury Road, which on top of being a uniquely tremendous and relentlessly memorable film, easily stands as one of the greatest cinematic achievements of the past decade, which like Inception above, simply can not be ignored. 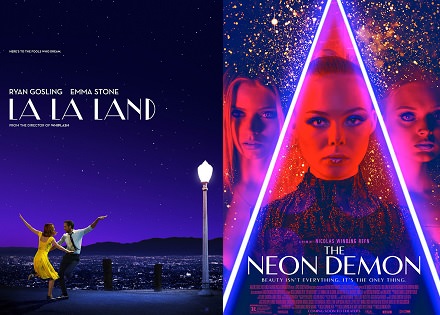 Similar to Inside Out, I absolutely love La La Land, which was my original pick for #1 of the year. I love that movie so, so much! However, as much as I love that movie, I can't help but feel like my #2 pick for that year, The Neon Demon, just speaks to me so much more on a really messed up personal level. So much so that I might actually consider it my new favorite all around movie from that year.

And not only that, but another movie that I want to mention that I would specifically bump up the list is Batman v Superman: Dawn of Justice. Originally coming in at #6, it would easily sit somewhere in the Top 3 for me today, as that movie has aged incredibly well for me, and has continued to stick with me in a way that most films just flat out don't anymore. God, 2016 was such an awesome year for movies! 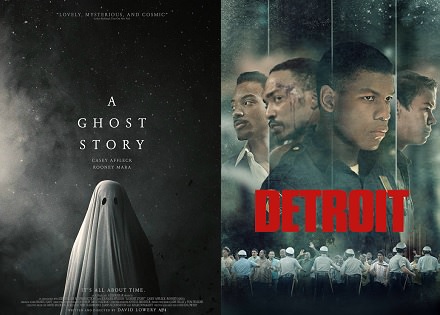 And now here's where things get a bit tricky, because honestly, 2017 was a terrible year for film. And while my #1 pick, Logan, was certainly a great one, if I'm being honest? In a better year, it may well have not even cracked into my Top 5 for the year. But while I wouldn't necessarily lower its ranking now, I can say that I'd probably bump a couple of movies up, which over time could very possibly continue to grow on me and perhaps one day take over that top spot. And those movies are A Ghost Story, originally listed at #4, and Detroit, originally listed at #7, both of which would likely find their way somewhere higher in the Top 5 range.

Those were both fantastic films that have really stuck with me from that year, and Detroit in particular stands out to me in part due to how horribly it got overlooked during this past awards season. It didn't receive a single nomination, yet in my estimation? There wasn't a single movie from that year that deserved to win Best Picture over it. So yeah, I don't get that one at all.

But anyways, yeah, that's about it. I'm sure if I dove in more and got really in depth, there would be a lot more changes to each list, but I just wanted to point out the ones that really stood out to me the most, the ones that were most obvious to me without having to even really put too much thought into it, you know? And I just think it's pretty interesting how our opinions on these films can continue to change over time, where we might look at one movie more fondly today, only for another one to really stick with us as time passes, and we realize just how much more that other one really affected us.

So yeah, that's how my Best of Year lists would change, given the proper time for these movies to all settle. So how about you? Are there years where your #1 pick has changed? Is there a movie you weren't quite so hot on before, but which has really grown on you? Or vice versa? Let's hear it! 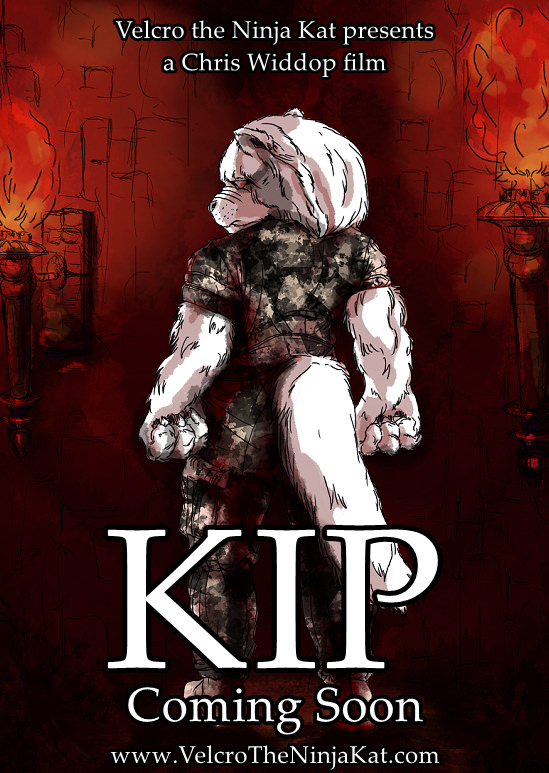