When I first got the trailer to this new Andrew Garfield flick, and I saw the title of the movie was Breathe, well you knew that I was going to see this and talk about it. Of course I was. After all, just a couple years back I released a short film by the same title, so of course I couldn't resist seeing this feature length remake to my own movie (though it is odd that nobody bothered to tell me about it before now). And to top it off, my film was a horror movie, and this new film was being released in October, the month of horror movies, so surely it was going to live up to the original short, right? So then, how does this new movie compare to the original made by yours truly? 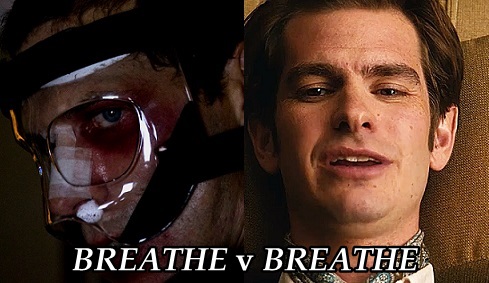 Well for one thing, despite all of the budget at their disposal, not one single werewolf appears in this movie, which I'm sorry, but that's bullshit. Especially when we come to the ending credits and I see that this was directed by Andy Serkis. You're really telling me that he couldn't have put on some CGI makeup and played a damn werewolf in this thing? 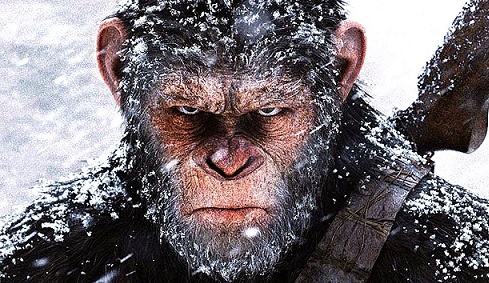 And it doesn't end there. In fact, there's very little relation between this movie and my own at all. In this movie, we follow a man played by Andrew Garfield who suddenly becomes paralyzed and has to learn how to live with this, and his wife played by Claire Foy, who does everything within her power to make life manageable for her husband. Now, notice I didn't include these characters' names. That's because this movie does so little to initially establish anything about these characters that it wasn't until well after halfway into the movie that I even learned the man's name. (Not sure I ever actually caught the woman's.)

You see, before becoming paralyzed, the movie wastes no time immediately dropping us on a scene where Andrew Garfield sees a pretty lady at some pompous rich people's gathering, and decides he wants to woo her. We then jump to him playing cricket, where they're incongruously positioned to where the ball would be hit directly at the gathering of people for some reason, and he hits the ball and breaks a dish directly behind this woman, drawing her attention.

Cut to the two driving together in a car, I assume on a date, and then cut immediately to another scene where she's on a swing talking with her brothers about the prospect of marrying him. Then we cut to the two on some outback vacation, where we learn that she's now pregnant, yet I've still yet to even learn anything about these two. Not their personalities, not their relationship, and not even their names. 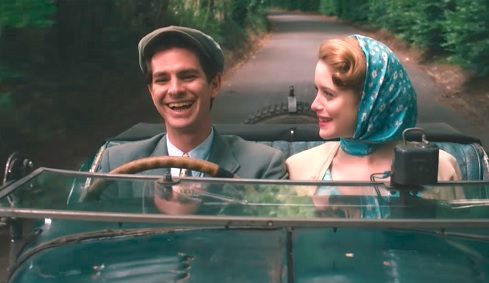 Our heroes drive in a car, and we learn nothing.

If it seems like I'm just randomly hopping all over the place with those quick scene descriptions, then that only means that I'm doing an accurate job portraying what it was like sitting through the opening 15 minutes of this film. And during this entire hopping around sequence, I was just shaking my head, worried that I was in for a hard sit, and just thinking, this movie could really take note from its title and just calm down and actually allow these scenes to breathe a little.

You see, we get the opposite problem here as we do in the original short. In that film, we possibly spend a bit too much time with a couple of our characters early on, a pair of policemen who become quite engaged in conversation while hauling a masked perpetrator off to jail. And we perhaps learn a little too much about them in the process. Where as here, we really don't spend nearly enough time with our two leads, and thus learn nothing about them. So, what we get is essentially an over-correction, if you will. 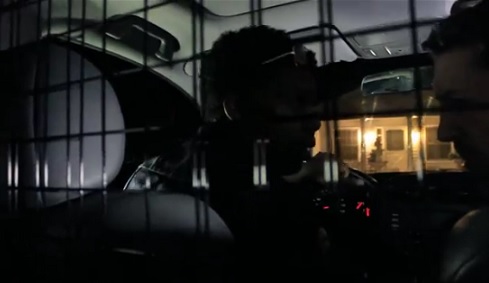 Our heroes drive in a car and, we learn too much.

So really, one of two things seriously needed to happen with these opening scenes in this new movie. Either they needed to be cut, and we just open on the two already together on the day that he's about to fall ill and become paralyzed. Or they needed to be drastically expanded upon, and a solid extra half hour should have been added to the final runtime just to really give these scenes their proper breathing room. Because as is, we literally learn nothing about these characters, so nothing from these brief opening scenes carries over into the bulk of the movie.

Thankfully, after Garfield gets paralyzed, the movie finally calms down somewhat, and becomes a bit bearable. We finally get a sense of these characters and their situation, but the passage of time is still radically off. What feels like weeks passing in the film, we discover is actually years, as his child is newborn when he's first admitted into the hospital and hooked up to his breathing machine (which I bet they weren't forced to shoot their hospital scenes gorilla style like we were), and when he's finally brought home, his child is now closer to three, though it felt like maybe only a few months had passed at most.

Anyways, the movie goes on, and we see how Garfield becomes accustomed to his new life, and how his friends and family help him still find a way to actually live, as opposed to merely exist, inventing a chair that aids him with his breathing and such, and going on adventures around the world along the way. And this is all mostly fine, I will admit.

Fret not though, for the aspect of poorly developed characters is a recurring one throughout, as there's a revolving cast of side characters who just sorta slip in and out of the movie on a whim, and only a few who I was able to still even recognize come the film's end. Like, there's his one lonely friend, and their inventor friend, and the wife's two brothers. But then as he's coming to terms with his death, there's some large gentleman who comes to sit by him and express how they've known each other for all these years, and I was left asking myself, has this character even been in any of the rest of the movie? And he certainly wasn't alone in that regard, not by a long shot. Though, to be fair, this much is in keeping with the original as well, to a certain degree... 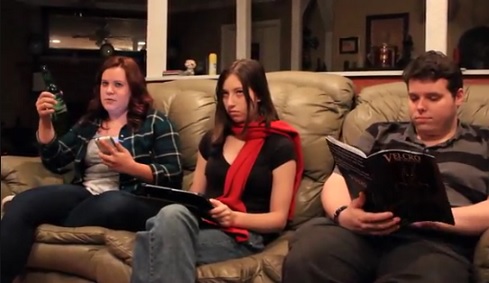 You only learn the girl on the far left's name in the credits.
As to the other two, even I'm not entirely sure.

But anyways, as we near the end of the movie, Garfield is giving a speech to a group of people who are deciding whether or not to fund the production of chairs such as his, so as to make for a better quality of life for people like him. And as he's speaking, he says the line, "When I first became paralyzed, I wanted to die." And then, right on cue, the power in the theater went out, like someone in the back was playing some sort of really twisted joke. I mean, I didn't think this was too entirely funny, but two ladies in the back row were hysterical at this, so what do I know? We figured the movie was mostly over, but I'm glad I stuck around for it to start back up and resume, because there was still some darker areas for the movie to go to yet.

Now, up to this point, despite a handful of scenes of sheer panic on Garfield's part as it concerns his condition, you'd be hard pressed to call this film a horror movie. However, I gotta say that I was quite surprised to see that they still went with the bloody conclusion in the end all the same. Literally, he's even bleeding out from the neck and everything, just like one of my own characters does in the original short. And it gets pretty gruesome, too. So at least they got that part right. 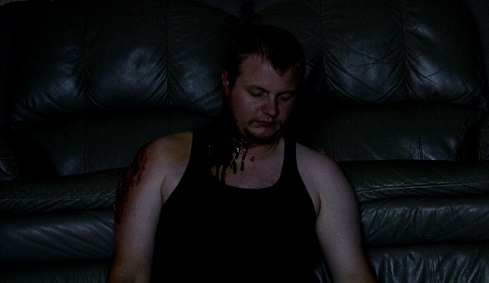 Otherwise though, there was very little in common between these two films. No murder mystery, no tangential police conversations, and worst of all, no werewolves. But at least we still got the bloody finale, not to mention the obnoxious constant breathing, though this movie's came as a result of a breathing machine, as opposed to someone just relentlessly breathing heavily into a mic for minutes on end. So, to say the least, while the film started out rough, I wouldn't necessarily call it a bad movie overall. It does pick up, and actually becomes quite an intriguing and heart warming story as it plays out. But as an adaptation, that heart warming feeling is a total miss, and not at all faithful to the source material (even if it may well be faithful to the actual true story this movie purports to be based off of).

But then, maybe I'm just too close to the source to really compare the two for sure. So just to be safe, while I don't highly recommend it or anything, it's not a terrible movie by any stretch of the imagination (the first 15 minutes or so aside, that is), so by all means see this new movie if you're curious enough. But first, definitely check out the original short, and see for yourself just how well the two stand up to one another:

A Look Inside Velcro: Polluted War

The next installment of The Ninja Kat series is coming soon, but in the meantime, here's a quick first glance inside the pages of Velcro: Polluted War. Just click on the image below to read the first two chapters right now!

Posted by Chris Widdop at 12:29 AM No comments: