Cat of the Day: Chloe 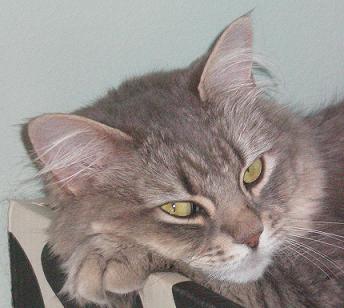 Today's Cat of the Day is Chloe. She's a fluffy gray kitty with a big fluffy gray tail, and, as such, when we originally got her, I wanted to name her Fluffy. Or, more specifically, Fluffy Gray Kitty. 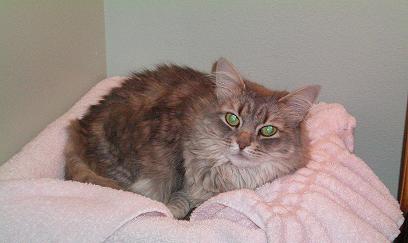 But, as it would happen, my mother thought that was a horrible name, and so she went with Chloe instead. I still prefer my own choice, but oh well.

Anyways, Chloe is the last of my mom's four cats. And she's also the loner of the bunch. Not by choice, mind you, she's just kinda been singled out by the others. They all kinda pick on her from time to time, especially Tom, that little bastard! It gets so bad that, when nobody's home, we have to make sure Chloe's secured away in a separate room from the rest of the gang, lest they make her life a living hell.

I know, poor cat! But then again, I can honestly kinda see where they're coming from at times. She does have a tendency to be pretty obnoxious a lot of the time, though she means well. And besides, she's not all bad. She's probably our most talkative cat. She basically knows how to hold actual conversations, responding to whatever you say with her squeaky little meow. And she makes a hobby of turning our paper towel rolls into her own personal cat beds. 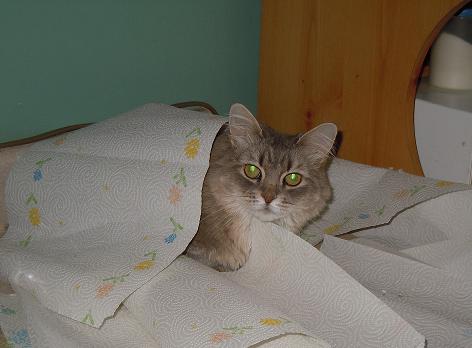 So yeah, Chloe's a sweet kitty, and like I said, she means well, even if she does have a bit of an annoying streak. But annoyance aside, she probably doesn't deserve to get bullied like she does, and hopefully being today's Cat of the Day will make up for just a little of it, if at least for today.
Posted by Chris Widdop at 12:17 AM