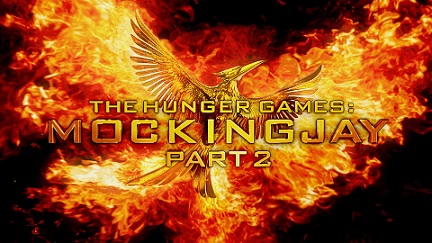 So here we are, the final installment of The Hunger Games series, Mockingjay - Part 2! But first, before we get into this movie, a quick rundown on my thoughts of the previous entries in the franchise: I actually thought the first Hunger Games movie was really good, and stands as the best of the whole series to date. Catching Fire, on the other hand, was putrid, vile, and insufferable tripe. A truly awful movie, just the worst. Mockingjay - Part 1, however, while still nowhere near as good as the first movie, was a monumental improvement over the previous installment, and ended up being something that was kind of awesomely bad in its execution. So then, here we are now with Mockingjay - Part 2, and, though it's far from the worst entry, it's still held down with an overly bleak tone in an overly bland world, and a story that feels all over place, if not quite in the same awesomely bad vain as Part 1.

Let's start with the tone. In many respects, the movie feels disjointed, going for a far darker approach than any of the previous entries, including a lot of grounded imagery that tries to show the horrors of war. You see, the series started off with so much color, but all of the color has been ripped out of this final installment, which is almost too somber for its own good. Everyone wears the same dark attire and sorta just blends in to the same bland looking environments, and even when the action begins, everyone looks so similar to one another that I had a hard time figuring out who was actually engaging in the action at a given moment. Hell, even Katniss' red outfit from all the promotional material... 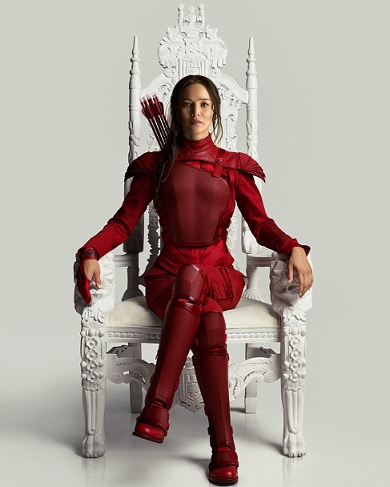 ... isn't even in the damn movie. And sure, that poster may be one of the most ridiculous things I've ever laid my eyes on, but at least the costume itself could have lended some color to an otherwise dull looking movie.

The thing is, these overly dark moments stand in stark contrast to the sillier, typical YA stuff, such as being chased by flooding oil or, most bizarrely, when the film suddenly decides to become a scene ripped straight out of The Descent during a battle against that movie's cave monsters. And yet even these scenes are treated in an ultra serious manner that's just kind of hard to actually take too seriously. If the film wanted to go for a more grounded approach, it needed to go all the way, or lighten up a bit when these visually silly moments find their way on the screen.

Where the movie also fails in its ultra-serious approach, is that the movie feels almost robotic, like it's completely devoid of any genuine emotion. Being a final installment, it's not spoiling too much to say that some fairly significant characters get killed off here. However, not once do any of these moments pack any kind of an emotional punch. When Rue died in the first movie, that was a truly honest and stirring moment. But here? There's nothing of the sort with any of the deaths in this movie. Every one of them falls completely flat, and leave you just kind of shrugging your shoulders, like it wasn't that big a deal. And believe me, there are some deaths in here that should be treated like they're a big deal, but the movie's robotic approach does these moments a disservice that completely drops the ball on them.

I also mentioned how the movie feels all over the place, and this is kind of hard to explain (hell, it's possible that this passage will feel about as disjointed as the movie itself, fittingly enough), but the pacing in this movie just has a very disjointed feel to it. For one thing, the movie feels significantly longer than it actually is. However, unlike Catching Fire, it's not necessarily in a boring way, but it's also not because the movie feels like a slow-burner, either. The movie just sort of trudges along, and as it does, the rhythm in this thing is just sort of... off.

It's like, structurally speaking, the movie has a hard time really connecting from scene to scene. Like its lack of emotion, this robotic movie has no real heartbeat. And this is also not helped by the fact that the movie also suffers a bit from Return of the King syndrome, never knowing quite when to end, so just adding on more and more endings on top of one another. So, yeah, there's a good example, imagine that feeling of watching all of those endings from Return of the King, only stretch that out over the course of the entire film, and that's about what I'm trying to convey here.

And speaking of endings, what I assume is supposed to be somewhat of a twist couldn't have been any more telegraphed. Even having not read the books and not knowing what was going to happen, I could see that shot coming from a mile away, so if we were supposed to be surprised, then just add one more tally to the list of areas where this movie failed spectacularly on.

But all that said, I still didn't find myself hating this movie. Probably more so that I just didn't really care too much about it. But that's not to say that it was all bad. Probably the most compelling aspect of the movie came from the conflict between Katniss and the brainwashed Peeta. Sure, this is also probably the most contrived aspect of the movie, but the actors actually did a hell of a job selling this nonsense and actually kind of making it work, bringing a true, real human element to it, something that the rest of the movie was very much lacking.

Josh Hutcherson definitely had to step up his game here to make this stuff work, but honestly, I was actually most impressed by Jennifer Lawrence. Now, those of you who've followed me for a while should be well aware that I am not as impressed by Jennifer Lawrence as seemingly everyone else is. I think she's pretty overrated as an actor, and in fact, I think her best performance to date has been in the first Hunger Games movie. But then she followed that up by over-acting her way to an Oscar, and proceeded to repeat that same cringe-inducing over-acting schtick in every role since. However, here, she's surprisingly reserved in this final outing as Katniss, dialing things down quite a bit, and, honestly, probably giving her best genuine performance in a movie since that first Hunger Games. I was quite impressed, and honestly hope that we can actually see more of this Jennifer Lawrence, and less of the over-acting Oscar winner, in her future work.

As far as other performances, honestly, most of the cast kinda goes to waste, most notably Woody Harrelson, as there's really nothing much for him or anyone else to do. I will say, however, that my favorite was probably Jena Malone, who shows up and proceeds to pretty much call bullshit on Katniss and the whole revolution surrounding her, which was pretty much the highlight of the movie for me. In fact, thinking back on it, her character was also one of the very few things that I actually did like about Catching Fire, so we probably could have done with a little more of her here. And Donald Sutherland is actually pretty fun to watch this time around. I've never really cared too much one way or the other about President Snow in this series, but in this particular outing, the character actually proved to be quite entertaining for once.

So, yeah, there you have it then. The series started off strong, then hit rock bottom with its sequel, only to kind of flounder about with these last two Mockingjay movies. They're both very problematic, but in radically different ways. And though it's a bit of a shame that the series could never really make a true comeback to being as good as the first movie, in the end I did find myself sorta enjoy tagging along with this series, like watching a trainwreck in progress. A bright, vibrant trainwreck, one that left its cars crashing and flying at first impact, until it all gradually settled down and skid to a halt, the cars all over the place in a jumbled heap, now covered in soot and debris from the wreckage, and losing all its color and life in the process. And, well, you watch a trainwreck for long enough, it sorta loses its spectacle by the end. And that's The Hunger Games: Mockingjay - Part 2.