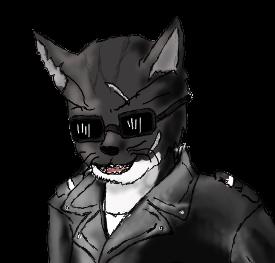 Charlie's a cool cat who's been fighting his whole life. So then when the citizens of the Country of Widows are in debate over the motives of the rogue Ninja Kat, Charlie couldn't be bothered with such trivial matters as to whether the Ninja Kat is really a terrorist or a hero. All Charlie's interested in is the new challenge that the Ninja Kat may possibly present to him.

Growing up on the streets of Highland, Charlie is a natural born fighter, and he has the battle scars to prove it. However, in the heat of conflict, he does have a tendency to be a bit a loose cannon, which has likely resulted in many of those treasured scars. He's also the leader of a rag tag group of cats who will loyally follow his every command, even if it means luring out the mysterious Ninja Kat in order to entertain Charlie's deadly desire for a true challenge.

www.VelcroTheNinjaKat.com
Posted by Chris Widdop at 12:06 AM