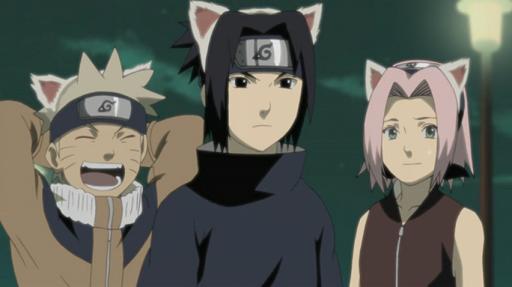 So since there was no new Naruto chapter this week, I was trying to think of a way to get my Naruto fix that might also be able to tie in to Cat Every Day August. That's when I remembered an old filler episode from a while back in the anime. After the Pain arc, the anime started doing a "History of Konoha" filler arc, which was essentially just a new batch of part 1 filler hell. However, the difference this time was that these episodes took place before Sasuke left the village, meaning we got to see Sasuke taking part in some of the filler silliness along with the rest of the gang. Now, I'm not usually a fan of Sasuke, but I'm almost always down for some Sasuke fillers, because the anime team likes to have fun with the character and put him into all sorts of unusual situations that you wouldn't normally see him in, making him a far more entertaining character in the process.

Today, I'm taking a look at episode 189 of Naruto Shippuden, "Sasuke's Paw Encyclopedia". In it, we learn that Itachi had originally set up a series of challenges for Sasuke that involved him capturing various cats and collecting their paw prints.

Sasuke, being the natural talent that he is, made fairly easy work of most of these challenges, though there still remained one paw print that he had yet to collect, that belonging to Nekomata, the giant boss cat of an entire village of ninja cats. So, in order to get the print, Naruto, Sakura, and Sasuke must infiltrate the cat village by disguising themselves as cats (apparently merely wearing cat ears is enough to fool the cats in this world!).

It's a pretty silly episode overall, but I always felt that these were the best kinds of filler. We get to see Sakura get hit on by a top hat wearing cat in a bar, and Sasuke taking out an entire legion of ninja cats as he makes his way up the tower to meet Nekomata. He ultimately succeeds in defeating the large cat after a fight that concluded when Sasuke blew up the roof of the tower, causing it to collapse on top of Nekomata and pin him down long enough for Sasuke to get his paw print.

It's also interesting in that the episode shows us a little more of the complex relationship between Sasuke and Itachi. We see how Itachi set everything up for Sasuke, still looking out for his younger brother from the shadows in his own warped attempts to help Sasuke become as strong as he can. And this flashback sequence is only made all the more awesome by the fact that we get to briefly see Itachi wearing the cat ears, too!

So yeah, it's a pretty good episode, and one of the standouts from that particular batch of fillers. And if nothing else, it's definitely worth checking out if only for scenes such as this: