My Secret Asian Clone or: I Am Not Yet Heechul 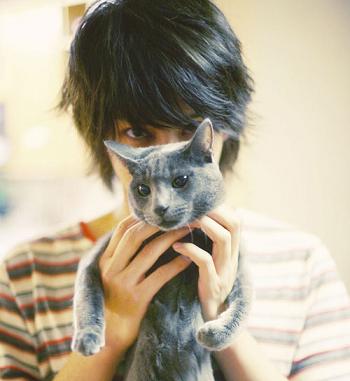 So we all have those people who we're constantly confused for. Or, well, maybe you don't, but I sure do at least. There's at least one or two people in town who apparently look exactly like me, and who I get confused for all the time. One of them played basketball at Leon apparently. I've never actually met my in-town "clone", however, I have recently discovered that, on the other side of the world, specifically in Korea, I have another clone. A Secret Asian Clone, if you will. However, this clone isn't one who resembles me physically. No, me and my Secret Asian Clone, it's more of a personality thing. So anyways, let's talk about cats!

My Korean clone's name is Heechul. He's kind of in a Korean boy band called Super Junior, but that's not important to this post. What's important is his approach to cats. He has four cats, three of which I can't name, because, you know, Korean. But his fourth cat, Heebum, is the superstar of the bunch. Heechul posts all kinds of crazy pictures of his cats and the crap he puts them through. The same kind of crap that I put my own cats through (he totally has wrestling matches with his cats!). I actually kind of wish I had thought to take pictures and videos of said crap, but, alas, it would appear that I've been beaten to the punch.

Heechul even has his own radio show, and he'll on occasion bring his cat, Heebum, along with him. He has had his cat perform a live, extravagant dance sequence, as well as attack one of his band members against his will. But enough talk, let's see some more examples of this awesomeness.

Heechul is an awesome cat owner, one who really gets it, and appreciates his cats. And if his cats are anything like my own, they appreciate the craziness, too, and love him unquestionably for it. But Heechul isn't just good with cats, he's a pretty decent guy in general. For instance, while walking around one day, he ran into a sad, lonely friend of his who was just dancing by himself, all sad and lonely. So, in order to rectify this, Heechul put together a music video where he gathered up a bunch of people to hang out with this sad and lonely friend in order to put an end to the sad and loneliness. See, check it out for yourself here:

What an upstanding guy!
Posted by Chris Widdop at 12:39 PM