CENA presents The Top 5 Wrestling Moves (to perform on your cat!)

It's Monday, and that means that tonight is gonna be Raw! So tonight, we're changing things up again. Cat Every Day August (CEDA) becomes Cat Every Night August (CENA), and so who better to help walk us through today's post than WWE Superstar, John Cena. 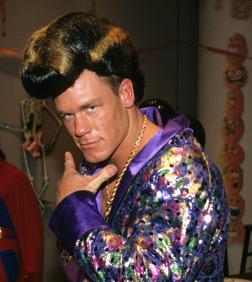 Tonight, we're going to take a look at the Top 5 Wrestling Moves for you to perform on your cat. Yes, you heard right, the Top 5 Wrestling Moves. To perform on your cat. Now, back in the day, I used to wrestle my cats all the time. But I've since retired from the business, and since no video footage exists of my classic wrestling matches with my cats, all of my examples will have to be from actual wrestling matches between people. I know, ew, right? So yeah, anyways, on that note, let's start right off with #5.

(WARNING: Do Not Try This At Home)

This is an easy one to start out with, and a nice way to ease your cat into his future career as a part time professional wrestler before you begin slamming him around the ring (bed/couch). And since your cat is so much smaller than an actual person, you should be able to lock in the move with just your hands, rather than having to use your arms as shown in the example.

Now you're ready to slam your cat around a bit. This is another good move to start out with since this is a face first slam and, since cat's have a tendency to land on their feet anyways, it shouldn't be too much for your cat to handle at first.

Okay, did your cat like landing on his feet? Good, then he's ready to be slammed on his back! Traditionally, you'd want to grab your opponent by the neck before lifting them up. But when performing this on your cat, you're gonna want to actually grab him under the shoulders. It'll have the same impact, but without actually strangling your cat. Gotta keep it TV-PG, after all.

There's nothing quite so satisfying as lifting a cat onto your shoulders, only to twirl him through the air and send him sailing to the ground. Seriously, just try it.

And the #1 wrestling move to perform on your cat is none other than the classic cat move itself, the powerbomb. And really, who hasn't tried powerbombing their cat at some point in time? It's the perfect move when wrestling your cat, and you get to watch the expression on their face as you drive them down onto the mat(tress).

Thank you, John. So there you have it, the Top 5 Wrestling Moves to perform on your cat. I hope all you cat owners out there learned something today, and remember to stay safe! (And I sincerely apologize for John Cena's horrible, horrible rhymes...)
Posted by Chris Widdop at 12:03 AM