Cat of the Day: Belly 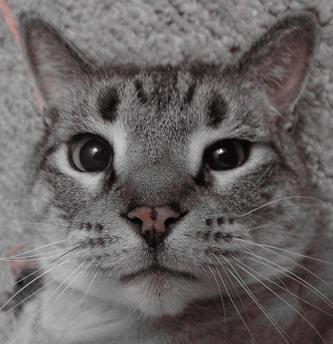 Today's Cat of the Day is Belly. He's actually my friend Dao's cat, and I only met him once, when I was helping Dao pack her things before she moved to Vietnam. When I met Belly, he seemed like a real chill cat, but since I'm not too personally familiar with him, I figured I'd do something a little different this time and allow Dao herself to talk up her old pal. So then, I turn your attention to my first ever guest blogger, Dao:

I was a dog person until I met Belly. Growing up, my family had raised a couple of dogs, and we never had a cat. With that said, I was more inclined to have a dog once I got my place and all. Well, the plan kind of worked until this husky tabby cat named Belly walked into my life.

When I met him, Belly was around 12-13 years old but he did not look that way. Instead, he was very energetic despite his enormous girth. I remember the first time I saw him walking around in the parking lot. He just had this swagger that reminded me of President Barack Obama. Then, my neighbor pointed out the first time she saw me, there was a big cat walking right behind me like a puppy. Later on, I understood this behavior was rare to him. As an alpha-cat, Belly prefers his freedom. His real owner had two other cats and Belly probably got sick and tired of having to fight for space and affection. So he chose to live outdoors and lived on whatever the residents in my former apartment complex could give him.

It started with Belly allowing me to pet him, and then propelled to me giving him buttered bread. The next thing I saw in my living room was a bag of cat food. Then, one day, Belly walked into my living room, meowed loudly, and declared my apartment his. Just like that, I became his human. If you think you can own a cat, you are wrong. The cat owns you in so many ways, and he manipulates you into doing things for him while thinking you are the boss. Cats are clever, and Belly is in the upper level of intelligent felines, as I realized this cat could probably do my taxes if I asked.

The perks of living with a husky tabby are enormous. If you haven’t had an experience of being squished under 20 lbs of cat during the winter, you are in for a treat. Although Belly had his own bed in the living room, he liked to bunk with me. And by “bunking”, I mean jumping on top of me when I least expected and staying on my legs so I could not move. But I have to say, he kept me warm during those bloody cold Tallahassee winter nights (which can get really cold sometimes!).

Another perk of being Belly’s human is to have his expert opinions on fried chickens. During the two years we lived together, Belly probably ate more chicken and turkey breasts than any 5-year old could. I have to say Belly is passionate of his white meat chicken and he prefers to eat them deep-fried. If the fried chicken was good, he would meow and ask for more. If it was not, he would walk away and look all pissed off.

I can spend all day talking about Belly, but I already did so during our time together. You can hop over to my blog and click on his pretty furry face to read more about him. Right now, Belly is living with my former neighbor and he is doing well. I miss him every day, and I can’t believe how much he had filled my world during those two years. 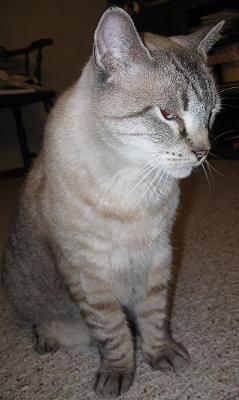 You can read more from Dao by visiting her blogs "My Makeup Blog" and "Life and Rewrite".
Posted by Chris Widdop at 12:04 AM