Sianostra - My return to filmmaking

So I recently released my latest short film, Sianostra. And that film marks my return to filmmaking after about a three year hiatus. My last movie I completed was Breathe back in 2015. And since then, I've dabbled in others' various film projects to certain capacities, but for the most part, I was taking a bit of a break. I spent the time mostly focusing on writing more new installments of the Ninja Kat novels, which were themselves going neglected while I was focusing on my filmmaking full-time at the time. But since I knocked two more of those out, and I also wound up writing no less than four new film scripts in that same time frame, I got the itch, and it was definitely time to come back to the world of filmmaking.

Now, I say that I wrote four different screenplays during that time, but I actually had five on my plate to choose from. Because before I had taken my break from filmmaking, I had actually written a script for a short film back in 2015, shortly after we had wrapped up Breathe. In fact, Cam Ray, who played the character Charlie in Breathe, approached me afterward with an idea for a film project of sorts.

What he pitched me was actually a really big series about these alien characters who come to our world and just sorta interact with us and experience life in a very quirky anime style slice of life sort of way. We had a number of discussions for ideas that we could pursue with this concept, but what I ultimately boiled it down to was, let's do a short film first, something that could act as an introduction to our main characters and the main concept, and if it works, and we decide to move forward with the bigger project at play, it could also work as either a pilot to a series, or just a short film introduction to a larger film production with a wider cast of characters to play with.

What's also interesting to note is that this also marked my first big collaborative writing project, which presented its own challenges and learning experiences. Cam pretty much wrote the first half of the original screenplay, and provided me with notes on where the story could go from there. And after a number of conversations, I filtered through for some of the better ideas and put together the second half, and went back over to try and tie everything together, revising accordingly until we were both satisfied with it. And while this was initially intended as the opening act to something bigger, I also felt it was important to try and keep things as standalone as possible, just in case it didn't really go anywhere, while leaving room to expand on if we did decide to later on.

So that's basically what this film was, was a script that I had dusted off after three years of sitting in the shelf, and finally getting around to shooting. I personally didn't feel my heart was quite in the project enough back in 2015 to really pursue it and do it any real justice at the time, but I definitely felt that now I was in a much better place mentally to give it a go. It was a simple enough concept to act as a good starting point to reintroduce myself into filmmaking and really get my feet wet again. And in the end, yeah, I definitely feel like you can see my rustiness in places in the finished product. But for the most part, I'm pleased with how it turned out all the same. As I mentioned, we were going for more of a quirky anime style, and wanted to play with music in a way that really interacts with the imagery on the screen. And in those regards, I'm definitely pleased with what we accomplished.

We definitely had a lot of fun filming it, too. There were a number of unexpected hurdles we had to cross over along the way (next door establishments making tons of noise, the neighbor's dog barking over dialogue, getting suddenly rained out mid-scene, etc.), but we managed to power through them and put together something decent all the same. Believe it or not, we actually filmed it at the same house we filmed Breathe as well, but you'd never know that just from looking at it. And the new cast were truly a pleasure to work with, and I've already since made plans to work alongside them again in future projects to come, so watch out for those as well.

It was also my first real foray into the genre of comedy. I've definitely sprinkled humor into mostly everything I've done so far, but this was what I suppose could be considered my first full fledged comedy. So that was a bit daunting, especially when I'm not entirely sure if any of the humor is actually landing or not, being so close to the project as I am. But after showing some rough cuts to some people and hearing them genuinely laughing in places, it was nice to see that at least it appeared we got some of it right.

In some ways, looking back on it now that the project's finished, this film actually reminds me of my first movie, The Red Scarf. For one thing, it's about as long as that one, but also the focus on a more anime inspired style and emphasis on music is prevalent in both as well. But just as with my first movie, as I mentioned, you can also see at points where we were definitely still finding our footing with this movie, just as we were learning as we were going along on The Red Scarf way back as well. So while this may have been a fun, if imperfectly shaky start back into filmmaking, then I can only hope that perhaps I'll be able to take all that I've learned from this experience, and that my next films will similarly follow in the footsteps of those that immediately followed The Red Scarf, in that we'll only improve from here.

As to where we go from here, I mentioned how this film was meant as an introduction point for a larger story. And that does still stand as a possibility for us to tackle one day. I've already had some conversations with Cam concerning where the story at large can go from here, so we definitely have some ideas. But in the meantime, we still have at least three more scripts on deck for us to attempt to tackle first, so it may be some time yet before we reacquaint ourselves with Noah and Sianostra again.

But for now, despite being a little rough around the edges in places, this movie has received a mostly positive reaction so far, with many using the words "cute" and "charming" to describe it. So I'm pleased enough by that. And so, now that I've given you a little bit of background behind it, if you kindly would, please give this new film a watch, and see what you think of my return to filmmaking with Sianostra! 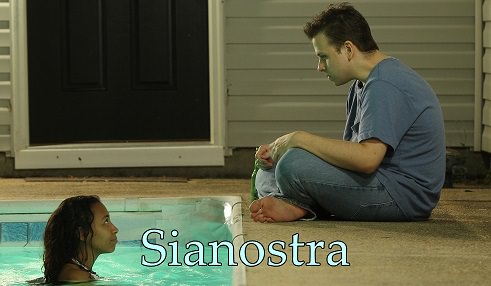 The wait is finally over. If you would, please check out my latest short film, Sianostra!

Posted by Chris Widdop at 7:29 PM No comments: