It's that time again, time to count down the year's best and worst in film. And this was definitely an awesome year for movies. There were so many super fun flicks released this year that it's easy to lose track of 'em all. And where as most years are relatively easy enough to round it out to a Top 10, narrowing it down to just 10 films gave me a bit of trouble this time around. I had a pretty solid enough Top 8, but I had to wrack my brain to decide which films should fill in those last two slots. But I finally managed to do it, and even I'm a bit surprised by what I ultimately went with. The films that just missed the cut include 21 Jump Street, Django Unchained, Ghost Rider: Spirit of Vengeance, Les Misérables, and Looper. So consider those my honorable mentions for the year, and lets move on to the list.
#10 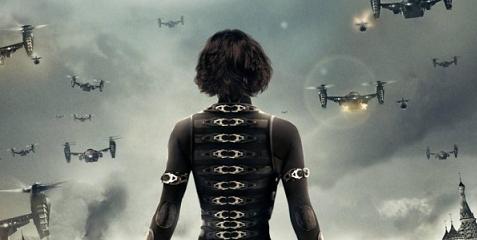 This is probably my most surprising inclusion to the list. But when it came down to it, this beat out all the others if only due to the sheer ambition and creativity of Paul W. S. Anderson. On top of all the over-the-top action, music, visuals, and everything else, this latest Resident Evil is also one of the most inventive and imaginative movies I've seen in some time. Not to mention it's also by far the best in the Resident Evil franchise, satisfyingly tying in all the others while single handedly correcting a lot of the issues present in the previous movies. While they're all essentially just dumb, fun movies in the end, this is the closest I'd come to additionally calling a legitimately good, quality movie in its own special way. Original review. 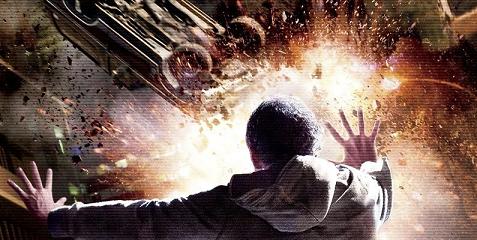 In a day and age when we're being overwhelmed by superhero origin movies, this one, instead, presents the origin story of a super-villain. And considering how we totally got jipped out of a Magneto origin movie, I'll take what we can get! In what is probably the best found-footage movie since The Blair Witch Project, this one focuses on a group of kids who acquire telekinetic powers. Our main character, a troubled kid named Andrew, happens to be particularly adept with these new powers, and we get to witness as he uses them to rise in fame and popularity amongst his peers, only to fall back down in disgrace and frustration. And, now utilized with an outlet with which to unleash his anger, he goes on a rampage, letting the world feel his pain. It's a fascinating look at the way that various aspects of the world can gradually chip away at someone until they've reached their breaking point, and one that hit a personal note with me. Original review. 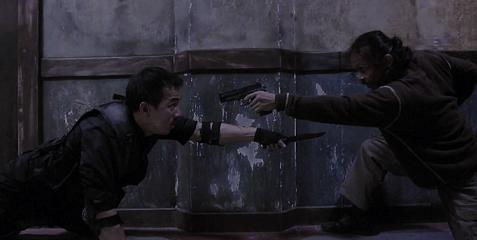 This movie is bloody, brutal, and unrelenting. And once the action starts, it never lets up, in what some are hailing as the best action movie of all time. And I can definitely see where they're coming from with that claim. Not only is the action intense, but there's a whole variety of it. Want guns and explosions? This movie has it. Wanna see machete wielding thugs clash steel? Got it. Or wanna just see some bad ass balls-to-the-wall martial arts? Yup, this one has all of that in spades. It's everything you could ask from an action flick and then some, all backed by a pulse pounding score that'll keep you on the edge of your seat throughout. Original review. 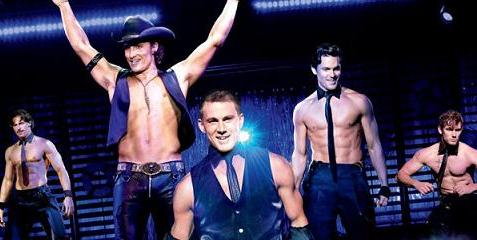 This was a big year for superhero films, and of the big three, I expected the least from the new Spider-Man. But it managed to surpass my every expectation, and easily stands up against Raimi's originals without making them feel irrelevant, the way Batman Begins did to the original Batman movies. The movie manages to still feel fresh despite essentially retreading old ground, which is quite the accomplishment from the appropriately named director. It takes a more serious approach, but it does so while still maintaining a good level of fun all around. But as fun as the action can be, the characters are what bring this movie to life. Andrew Garfield's snarky Spidey is a breath of fresh air, and his various relationships with the rest of the cast have a surprising level of depth to them for a film of this nature. So yeah, I was impressed. In fact, one might even say that I was amazed by this movie (because you haven't heard anyone use that one yet!). Original review. 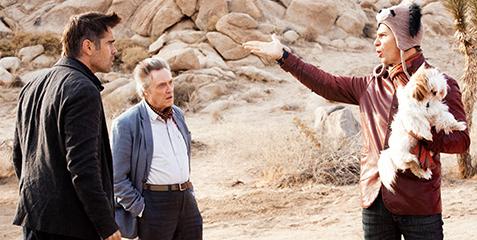 The director of In Bruges did it again with Seven Psychopaths, delivering an awesomely dark comedy with a totally unique feel to it. And when you're dealing with a movie about psychopaths, you better believe that it's going to be crazy. This movie is exactly that, and with performances this good, it's a believable level of crazy at that, which is the scariest part about it! Somewhat of a satire on ultra-violent films, the movie is about a man writing a screenplay about seven psychopaths (hence the name). But the more he writes, the more his script starts to come to life. And before you know it, everybody (you, me, everybody) gets sucked into this brutally hilarious roller coaster ride of insanity! With clever writing and a stylized editing technique, this is a movie that'll entertain you while you're watching, and leave you wondering if you really just witnessed that after the credits roll. Original review. 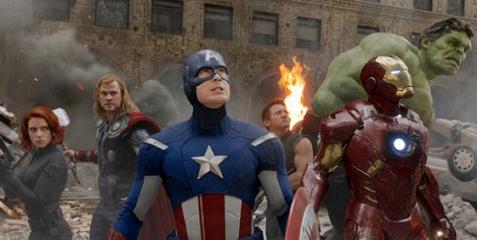 The fact that this even happened at all is an achievement all itself. The fact that its as good as it is makes it all the more impressive. I still have a hard time comprehending how Joss Whedon actually managed to balance out this movie as well as he did. Handling this many big name characters is no joke, but he did it, and he put out one of the most fun movies of the year in the process. Where as Nolan's been taking the Batman franchise to darker and darker places, Marvel's taken the opposite approach, focusing on fun factor above all else, and that's never more prevalent than in The Avengers. In many ways this is very much the Anti-Dark Knight, lightening up the mood and providing an entirely different experience from all the gloomy heroes we see today. And in this incarnation, these characters have never been better. It's an exciting experience from start to finish, with awesome exchanges of dialogue in addition to the hammers and shields and what have you. 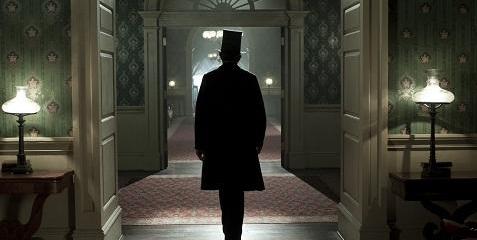 I'm actually surprised by just how much I liked this movie. Looking at the rest of these movies, you really wouldn't expect this to land so high on this list. And yet, here it is, up there in the Top 3. But I really, really enjoyed the hell out of this movie. It's basically two and a half hours of pure dialogue, and yet it's presented in such an interesting way, and elevated by such phenomenal performances, that the running time just flies by. And this really is a showcase of some amazing acting, so much so that even trying to name off the actors who stood out becomes pointless, 'cause I'd be sitting here all night typing out the names of the entire cast. But I was impressed by this movie, not only with the content that's here, but also by what Spielberg left out. This could have easily become another artificial "tear-jerker", but Spielberg thankfully showed restraint in this department and kept his focus on strengthening the story on its own merits. Original review. 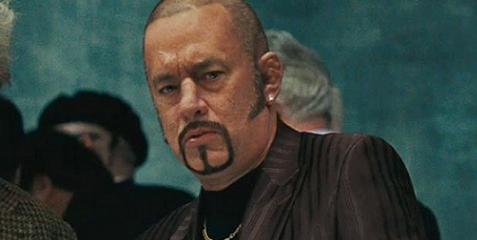 Even after reviewing it earlier in the year, I'm still not sure I quite have the right words to properly describe this film. It's an emotionally stirring sci-fi epic with a message of love and hate that sprawls throughout the ages. The different time periods almost act as individually broken up puzzle pieces, which are then placed in such a way that manages to intricately weave the narrative back together again. And the cast finds new ways to hide within each piece of the puzzle, and they're so good at it that when the credits roll and show you who played who, you'll be shocked by more than one reveal. It's just ridiculous the amount of detail they put into the editing and makeup. But all of these technical aspects, in addition to some great performances all around, tie the themes together and deliver an extremely powerful and moving experience. Original review. 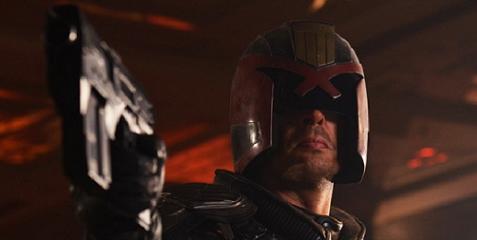 For those of you who know me, this one comes as no surprise at all. Quite frankly, never in a million years would I have expected to be as impressed by Dredd as I was. I went in expecting just another dumb, fun action flick, but this movie completely floored me, and what I walked away from was truly something spectacular. Every single thing about this movie just clicks. The action is crystal clear and exciting throughout, and the film constantly finds new ways to increase the stakes around every corner. The plot is strongly written, leaving little room for nitpickers to find flaws, and with a nice level of depth not usually found in this sort of film. And the movie is filled with so many awesome one-liners, brought to life by Karl Urban, who is Judge Dredd. But on top of it all are the visuals. This movie is absolutely gorgeous. One of the most stunningly beautiful films I've ever seen. And the visual effects are all cleverly written into the plot, and used in a way that delivers a strong message on drugs.

I really wish more people could have gotten out to see Dredd, since it got screwed over by theaters playing such limited showings. But I showed my support at least, and I ended up seeing this bad boy four times in theaters (more times than any other movie), and I even broke my anti-3D stance for one of those viewings. The 3D was admittedly underwhelming, which was a bit of a shame, as there were definitely scenes that I thought could have looked awesome in 3D, but they really didn't deliver. So for now, I'm back to avoiding 3D movies (until the inevitable Magic Mike 3D re-release that is, lol). But in any event, like I said, I never would have imagined I'd love this film as much as I do. Not since The Dark Knight have I been this thoroughly impressed by a movie, and more so than any other movie this year, it stands up extremely well in post-viewing analysis. So if you get a chance, see this movie. It's easily the best movie I've seen this year. Original review.