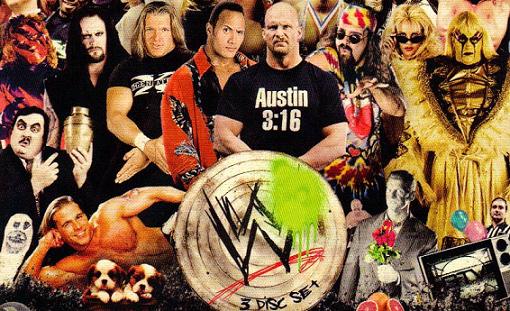 So I checked out WWE's latest DVD that takes a look at The Attitude Era, and it's definitely a strange set. It's okay, though it doesn't really cover any new ground that hasn't already been covered before, and covered better, in prior DVD sets. In fact, there are times where it feels like the WWE is actually ashamed of this era in their history, which is kinda baffling considering it's arguably their most successful time period ever, and they haven't even come close to matching that level of success since.

For one thing, the documentary feature is very short. It's like they just rushed through everything as quickly as they could, glossing over major events such as the Austin/McMahon and Austin/Rock rivalries. But then they go on to focus on DX for a comparably extended period of time, as if DX was the defining force behind the Attitude Era. Sure, they were certainly a big deal, though there were definitely bigger aspects that contributed to the success of this era. For instance, The Corporation, Vince McMahon's stable of cronies put together solely to battle his arch nemesis, Stone Cold Steve Austin, is never once even hinted at. This, despite having so many major implications on the company such as Triple H's rise as a main event mainstay, Shane McMahon's shocking display as a credible competitor in the hardcore scene, and the showcase to one of The Undertaker's most popular portrayals of his entire career, when he was the gothic leader of his Ministry of Darkness. All of this is absent from this set.

And not only are major events absent, but major wrestlers themselves couldn't even be bothered to add their two cents. The main guys who contribute to the documentary portion are guys like The Road Dogg and Mark Henry. To a lesser extend, Big Show and Mick Foley have their say as well, as does Christian (but no Edge), but that's really about it. Major stars such as The Rock, Austin, and Triple H have only maybe a single line or two to say, and then other big names such as Kane, Undertaker, Michaels, and Jericho are entirely absent altogether. Hell, even Vince McMahon didn't care enough to say a few words on this era of his company. I would have also liked to have maybe heard a little bit from some current guys talking about how this era may have influenced them at all, but there's nothing like that here either.

Not only is the documentary rushed, but it's oddly edited as well. They just seem to jump from one thing to another with little in the way of rhyme or reason, and on two separate occasions they randomly start focusing on The Brood. It's almost as if whoever put this thing together didn't even watch the finished product to look out for these things. But more than anything, there's probably more emphasis placed on the sexualization of this era than anything else, to the point where one would think that sex was the only thing that The Attitude Era had to offer. And they go out of their way to show guys like Foley talking about how they probably went too far in this regard, and it almost comes across as if they're trying to use this DVD set as an apology note for this era of wrestling even happening.

It's pretty disappointing seeing a DVD focusing on one of the most successful eras in wrestling being given such shoddy treatment. I was hoping for an in depth look at the era, similar to what we got from The Rise and Fall of ECW (which is, oddly enough, still by far the best quality DVD that WWE has ever released). And I know that the WWE is still capable of quality DVD sets, as was proven with the CM Punk DVD that came out a couple months ago. But this set feels like a waste, and if you've already seen The Monday Night War, then you've already seen a better and more in depth look at this time period, and that set was juggling between what WWE was doing at the time as well as WCW.

So the documentary feature was mostly a let down, and the bonus features aren't much to brag about either, with quite a few startling omissions. It's an odd set, and given the importance of this era, you'd think that they'd treat such a DVD with at least a modicum of respect. Hell, lord knows they could certainly learn a thing or two about putting on a quality show in this day and age by looking back at their successes from this time frame.

But basically, the only reason to even bother with this DVD is to finally see footage from this era where the old WWF scratch logo isn't blurred out anymore.