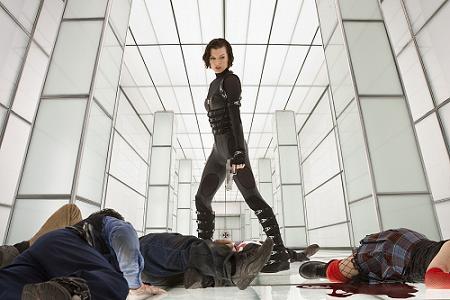 Oh my, this movie was special. Paul W.S. Anderson has quite the imagination, and he lets it go wild in this latest Resident Evil movie. Tying in ideas from the previous four movies and improving on them in inventive ways, this is probably the most creative entry in the series to date.

Warning, there'll be a few spoilers in this review.

The movie starts off in style as it opens with an action scene played out in super slow motion. But wait, it gets better. Not only is the scene in slow motion, but it's also presented to us entirely backwards. Because why not? But it's quite the spectacle, and it's especially neat to then see it played out like normal just moments later and watch as it all unfolds in just a matter of seconds.

Picking up right where we left off in the last movie, Alice, played by Milla Jovovich (aka, Mrs. Paul W.S. Anderson), is trapped inside a secret base where the Umbrella Corporation (ie, the most pointlessly evil corporation in the history of anything) undergoes various scenarios to try and keep the zombie outbreak under control. It's not too long before Alice is forced to make allies out of enemies in order to escape, and interesting secrets begin to emerge around every corner as they make their way through the base.

Where the last movie kind of abandoned the idea of a clone army that was introduced at the end of the third movie, this one resumes that idea and uses it to bring back characters who had been previously killed off. It was especially nice to see some of the characters and sequences from the first movie revisited. And likewise, fixing more issues from the last movie, the use of slow motion is much more reserved this time around. The opening scene aside, there aren't any action scenes that are shown entirely in slow motion just to try and show off the 3D effects, which is something I was a little worried about going in.

Really, this movie just makes me want to go back and rewatch the other movies. For instance, the opening sequence from the last movie is redone here in the form of a simulation, which results in the first major martial arts sequence where Alice gets to show off her moves (you'd never know that she supposedly lost her powers in the last movie!). The action scenes are impressively shot and a whole lotta fun, even if they do tend to go on a bit too long near the end. But really, this movie doesn't play around. There were more than a few instances where I was caught off guard by something, which I'm definitely able to appreciate nowadays.

I love how this movie just gives no shits when it comes to the absurdity level of the action scenes. It really is almost like watching someone playing a video game at times, which is very appropriate. Alice is flipping around all over the place, laying waste to zombies left and right, and by the end of the movie, everybody gets their shot to show off their guns. Hell, there's even a scene where Alice instructs Michelle Rodriguez's character on how to point and shoot a gun, and follows it up by proclaiming that she's now a bad ass. This movie is just so satisfyingly self aware in that respect.

I also got a huge kick out of the musical choices at times. Barry gets to go out to random Inception music, and we get to hear a very familiar sounding kung-fu western type of music during the final duel between Alice and Jill. In anything else, these musical choices might have irked me, but their cheesiness complimented the cheese on screen so well that it just worked.

So yeah, Resident Evil: Retribution was a fun movie, and as I've said, I loved the way that it played with ideas introduced in prior movies that had previously felt like missed opportunities. I haven't even begun to scratch the surface with the way the story plays out due to not wanting to spoil too much (hell, what little I've already explained almost feels too spoilerish), but I'll just say that this movie really impressed me with its creativity, and actually left me itching to get started on another new movie project of my own. So if you liked the other movies, then there's definitely something here for you to enjoy. And if not, well, lets face it, you were probably never gonna watch this movie anyways!