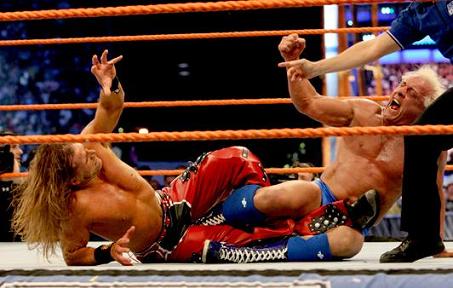 As it turns out, WWE is set to return to Tallahassee pretty soon for the first time in years for another house show. That said, with the announced main event of CM Punk vs. Ryback, I have about zero interest in attending this particular event. Now, had it been CM Punk versus, say, anyone else, then maybe (though, given Punk's recent injury, I doubt he'll be on the show at all anymore), but oh well, no big loss.

In any event though, I actually have attended quite a few really great wrestling events in the past, and I've seen quite a few phenomenal wrestling matches live. So I now want to take a look at the Top 5 Wrestling Matches I've Seen Live. But before we do that, some honorable mentions include Randy Orton vs. Rob Van Dam - Extreme Rules 2007, Triple H, Jeff Hardy, Rey Mysterio, and Kane vs. Umaga, Mr. Kennedy, MVP, Finlay, and Big Daddy V - Survivor Series 2007, and Edge vs. Undertaker - Wrestlemania XXIV.

#5 - Tallahassee Live Event - September 2003
Steel Cage Match
Kane vs. Rob Van Dam
Taking place just one day after my birthday, I was in for quite the birthday gift with this particular house show. After Kane had recently unmasked for the first time, he was engaged in a heated rivalry with his former tag team partner, Rob Van Dam. They were building up to a steel cage match to take place on television, and in the meantime, the two were testing the waters for that match at house show events, including this particular one. From what I remember, the match was pretty fun and intense, and the crowd was totally into it. The cage itself was a bit flimsy, which was a bit unusual, though it didn't effect the quality of the match whatsoever. Rob Van Dam picked up the win, and Kane made sure to send the fans home happy with a couple of chokeslams to Eric Bischoff, who acted as the special guest referee for the match.
#4 - Wrestlemania 23
World Heavyweight Championship
Batista vs. Undertaker
This match defied all expectations, and these two put on one hell of a show. This is probably the last time that the Undertaker's Wrestlemania streak was truly in jeopardy, as rumors were flying that Batista was set to take the win here. The crowd hated Batista, and he probably got the most heat of the whole night. But sure enough, with the fans on the edge of our seat throughout, Taker managed to pick up the win and the title after a devastating tombstone piledriver to a huge ovation from the crowd, keeping the streak alive in this brutal brawl of a match.
#3 - Wrestlemania 23
WWE Championship
John Cena vs. Shawn Michaels
And closing that same show was the blockbuster encounter between Cena and Michaels, who also just so happened to be the Tag Team Champions at the time. This match truly showed me the difference between any old wrestler and a main event player. Sitting way in the far seats at the back of the arena, I ended up having to watch most of the matches either through binoculars or by watching the titantron. But that wasn't the case with this one, as their every move projected throughout the arena like no other. I was able to witness the action in the ring itself as it was happening and take in all of the drama and psychology on display. In the end, Cena pulled off the win to retain his title via submission in one of the best Wrestlemania main events I've seen.
#2 - Tallahassee Live Event - September 2003
Chris Jericho vs. Ric Flair
I've been to a lot of house shows, but this one was by far the best. Not only did we get Kane vs. RVD in a cage match, but we got to see a technical wrestling clinic from Ric Flair and Chris Jericho as well. And boy was this one a doozy. The crowd was eagerly cheering on both of these wrestling legends throughout, and they in turn put together one hell of a wrestling match. It's also notable that they did this with Ric Flair having his tights pulled down for about half of the match. That's right, The Nature Boy's bare ass was showing clear as day through most of the match before he finally decided to pull his tights back up, which was just freaking hilarious!
#1 - Wrestlemania XXIV
Ric Flair vs. Shawn Michaels
Speaking of technical classics, Ric Flair and Shawn Michaels was not only the best match I've ever seen live, but it may well be among the best matches I've ever seen period. And the fact that I got to witness this one live makes it all the more special. These two told a picture perfect story in the ring like no other. This was Ric Flair's retirement match, and they were determined to have the man leave on the best possible note there was. And the closing moments in particular, when Michaels was battling with himself before finally mouthing "I'm sorry" and hitting that last sweet chin music to end Ric Flair's career, was just epic. Ric Flair went out like a hero in this spectacle of a match, and was given the best, most prestigious exit from the business that anyone has ever, and likely will ever, receive. It's just a damn shame that he had to go and shit all over that beautiful retirement shortly after, but ah well. In any event, this match couldn't have been better, and I doubt that any match I see live from here on out will come anywhere close to topping it.

So there you are, the Top 5 Wrestling Matches I've Seen Live. These aren't the only great matches I've seen, but they're certainly the most notable, and I can only hope to see more matches in the future someday that I'd rank up there amongst the very best.