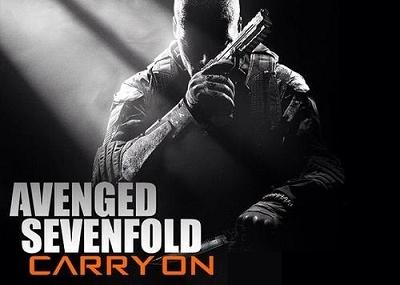 Yeah, this is about to be my third blog about Avenged Sevenfold. One might start to think I was a fan of this band or something. But anyways, this particular post is going to center around only a single song, their newest track off of the Call of Duty: Black Ops II soundtrack, "Carry On".

I first heard this song while I was signing books in Panama City about a month or so back. Well, at least, I say that was the first time I heard it, though really, I only got to hear the opening portion of the song before some asshat decided to drown it out with freaking Nirvana of all bands. But anyways, despite only hearing so little, I instantly recognized it as an Avenged Sevenfold song, and sought it out as soon as I could. And, as has been the case on several occasions this year with this band, I was absolutely floored, and I just couldn't get enough of it, playing it on repeat the whole night.

The song has a style similar to epic metal bands such as Dragonforce and Rhapsody (or Rhapsody of Fire, as they're now apparently called. Seriously though, more people should check that band out). The fast power metal guitars along with the melodic vocals and the incredible drums (their new drummer definitely meets this band's standards) all come together to bring us something new from this band. And not just the music, but even the lyrics at times sound like the kind of thing you'd usually expect from epic metal. "Search endlessly / Fight till we're free / Fly past the edge of the sea". This song is almost reminiscent to their self-titled album in this regard, the way they play with different styles than usual while still very much maintaining their own unique identity.

Speaking of their lyrics, it's actually sort of extraordinary how much this song speaks to me on a personal level and pretty much summarizes this past year in my life. The song is about not letting anyone or anything bring you down and keep you from chasing after your dreams. And I've been dealing with a lot of exactly that all throughout this year. I've had my fair share of hardships and situations that have driven me about as far down in the dumps as one can go, and at times have come close to reaching my breaking point. Yet, despite all of the odds, I still somehow managed to carry on and move forward, not allowing anything to keep me from living my life and achieving my goals, no matter how hard things may get at times.

Typically when a band releases an exclusive song for like a movie or video game, it's usually an okay song, if not necessarily all that worth your time. However, as if you couldn't tell by now, that's definitely not the case in this instance. This is up there with the very best that this band has to offer. Now, in my previous post, I listed what I felt were this band's best songs to date. And had I heard this song prior to writing that post, it certainly would have made the list. But since it was late, I suppose we can just consider it a strong honorable mention for the time being.

So yeah, "Carry On" is a powerful and moving song, so much so that I'm willing to sit here and dedicate an entire blog post to it. So, if you would, give it a listen for yourself and see if you can't see the brilliance that I do.