A huge part of me just died. Last night, I had to put my cat to sleep. It's probably the hardest thing I've ever had to do. Anybody who knows me, and who knows my cat, they know how much she's meant to me. I've had her for 17 years. I've grown up with her. She's been with me through all the good times and the bad. She's been more than just a pet to me, she's been my best friend my whole life. But she just got so weak, so frail, and I couldn't stand to see her suffer any longer.

Up until just a few days ago, she didn't show her age at all. She was still running around the house, jumping onto high places, and playing around like a kitten. But then it all just happened suddenly. Her body just quit on her. Suddenly she had become so fragile, she had to struggle just to walk to the litter, and it was all she could do to just lie down all day long. She wouldn't eat, and after a while, she quit drinking water. I brought her up to the vet, but they said that it was just her time. Her age had finally caught up with her, and it just happened to come all at once.

I've been pretty devastated for the past few days, but I've tried to put on somewhat of a happy face to mask my feelings. I've had prior obligations to tend to, and frankly, I never imagined that the end would rush up as quickly as it has.

She was a great cat, though. She was basically me in cat form. We had the same kind of attitude. We liked to be left alone. We had problems getting along with our brothers. And yet, we've also been very kind and caring. She somehow always knew when I was feeling down, and she'd come rushing right up to me, rubbing her face against mine as she purred. Especially in her later years, she was almost dog-like in that way. She'd greet me as I entered the house, she'd follow me around room to room, and whenever I called her, she'd pop right up and come sprinting to my side.

And she put up with a lot of crap from me. I used to wrestle her all the time, powerbombing her on the couch, wrapping her around my neck like a scarf. I've even been known to wear her on my head like a hat on occasion. But it was all in fun, and she'd get me right back. When I'd pet her stomach sometimes, she'd wrap her arms around mine and bite down. Then she'd look me right in the eyes and start to lick me instead. That is, until I tried to move my arm away, in which she went back to biting me again.

God we annoyed each other sometimes. But even so, we could never stay mad at one another, as moments later she'd go right back to rubbing past my leg and purring. But I'm going to miss those times. Even the things that really did annoy me, such as her knocking my books off the shelf, or her constantly trying to get into things I didn't want her getting into, waking me up in the middle of the night in the process. What I wouldn't give to be woken up right now and find out that this is all just one really bad dream.

My mom reminded me of the time when I used to ride her around in our small toy Ninja Turtles van, back when she was still just a little kitten. That's when our adventures began, which I've only just recently started writing down in the past few years. I've completed the first novel based on her stories, the one that I've mentioned I've been trying to get published. And I've outlined her entire adventure. She's been immortalized in novel form, and I owe it to her now to make sure her stories get out there for all to enjoy.

But this evening, when she was at her absolute worst, we had no other choice. It was only right, it wasn't fair to let her continue to suffer like she was. So my dad drove me to the animal hospital, and at approximately 11:50pm, she went to sleep in my arms. We came home and buried her in my backyard, right outside my bedroom window.

I just feel so numb right now. I'm so heartbroken, so torn apart, but I know I made the right call. And just as I put Velcro out of her misery, I know she'd hate to see me miserable like this right now. And if she were here with me right now, she'd come running up to my side and start purring away to cheer me up.

I'm going to miss my cat so much. She's been such a huge part of my life. We were inseparable. In fact, that's where her name originated from. The first time I picked her up as a kitten, her claws attached to me like velcro. We were meant for each other from the very beginning. She chose me just as much as I chose her. My mom warned us back then not to have fun with our brand new kitties while they were kittens, only to get bored with them once they had grown up. No, I never got bored of Velcro. Heck, I could never get enough of her, just as she could never get enough of me. I'll cherish those good times. I love my cat, and I'm really, really going to miss her. 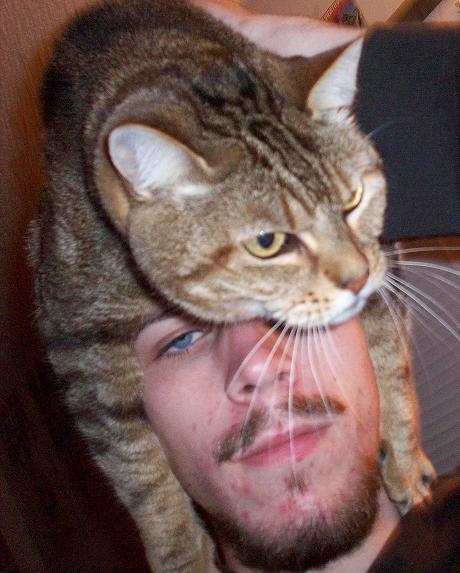