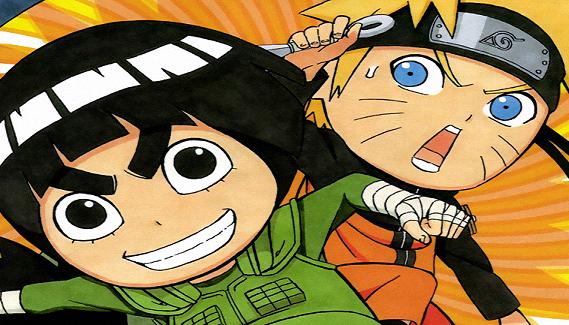 This new manga series debuted earlier this year, but only a few chapters were released before the series went on an extended hiatus. However, as of late, we've finally gotten more new chapters, and so now feels like an appropriate enough time to discuss Rock Lee's Springtime of Youth. It's the official Naruto spinoff series written by one of Kishimoto's own assistants, Kenji Taira, and starring none other than the handsome green devil himself, Rock Lee.

It's much more cartoony than the main series, drawn in a chibi style with a hard focus on comedy first and foremost. Hilarious as the series is, though, I can't tell for certain if all of the jokes will translate well to non-fans, because a lot of the humor comes from seeing characters who are known for being straight-laced and serious all the time (most notably Neji Hyuga) acting out in zany ways that you'd never expect to see from them.

The series is also supposedly targeted at younger kids. Yet, being Japanese, they have much lower standards than we have over here in the States, and as such, the humor is oftentimes quite risque. As a result, I'll be surprised if this series ever officially makes it over to America, and if it does, I'll shudder at the inevitable butchering that'll be in store for it.

We follow Rock Lee and his squad consisting of his rival, Neji, and their sensei, the flamboyant Might Guy. Also in the squad is Tenten, who is quite possibly the funniest of them all. She's seemingly the only "normal" person in this series, and her reactions to everything going on around her are priceless. In this crazy version of the Naruto-world, she's the only one who appears to notice how insane everyone is acting, which in turn drives her insane. 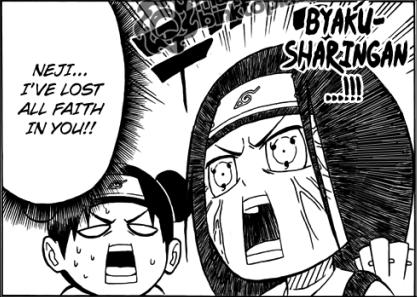 Each chapter is a short stand-alone story, and thus far, every new chapter has been more fun than the last. It's actually sort of surprising just how entertaining this manga has been given its overly-goofy nature. Usually this kind of thing runs thin pretty quick. And honestly, without some extended breaks, that still could very well become the case. But as it stands now, there's been times when I actually preferred the latest Rock Lee chapter over the main Naruto manga. And it's for these reasons why I feel that this series would be perfect for the Naruto anime to refer to when coming up with ideas for future filler arcs.

The quality is so good and done in a format that doesn't interfere with the main plot, so it's ripe for an anime adaptation whenever it comes time for fillers. The best fillers in the anime have been their one-off comedy episodes, and this series is packed full of just that. Plus it would give some actual screen time to the likes of Neji and Lee, much to the appreciation of their fans. And with the way the anime has recently had a tendency to have Naruto act completely out of character when it comes to filler, it'd be a refreshing change of pace to put the spotlight on secondary characters like Lee and avoid further misuse of Naruto's character.

This is a really fun series, though like I said before, you'll probably have to already be a Naruto fan to truly appreciate it. But even if you're not, there's still plenty of humor here that doesn't rely on knowledge of the original source. So if you're a fan of that wacky Looney Tunes style of humor, then you may well be able to find enjoyment out of this manga should you give it a shot.
Posted by Chris Widdop at 2:24 AM