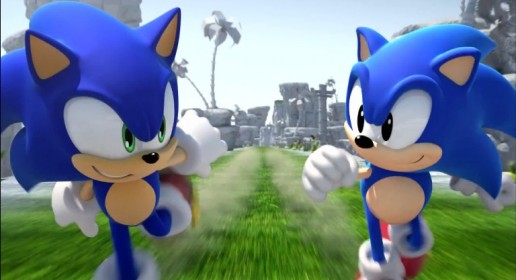 There aren't many games that I'm looking forward to. At all. However, of the very, very few that have caught my interest, one of them is Sonic Generations. Now, I've documented in blogs past about my love/hate relationship with this game series. To recap, the original classics are the best games ever, while the 3D games range from pretty good to absolutely abysmal, with just enough glimmers of sheer brilliance radiating out of the crap to keep me frustrated that they still haven't managed to get it right just yet.

Sonic Generations promises to be a collaboration of those two distinct styles. It's a collection of some of the most classic stages in Sonic's history, revamped and updated. Each stage is apparently going to have two ways to play it, either with the classic 2D style of gameplay, or the modern 3D style. I've seen some of the videos for this game, and it's actually kinda funny watching those two different styles played back to back, because it really shows just where Sega kept getting it wrong with the more recent games in this series.

When you think of Sonic, you think speed, right? Must go faster, must go faster! However, if you take a look back at the classic Sonic games, you'll notice that not only were those games not all that fast, but you were actually punished for trying to go too fast. Rush through the stage, and you've got spikes, badniks, and bottomless pits just waiting for you to crash into. No, with those games you actually had to take your time and be somewhat methodical with your actions. Yeah, you had your spin dashes and your loop-de-loops, but you had to be smart with them. You had to time your jumps right, or you'd be paying the price for it.

However, once Sonic left the realm of 2D, Sega said screw all of that. All they remembered was, "Sonic's fast!" And so, they focused solely on trying to make Sonic fast. Levels were designed in a way that focused on getting you moving straight ahead at lightning speeds. And to their credit, this actually worked in some cases. Sonic Adventure 2 actually pulled this off almost flawlessly, even if the level designs and badniks were a bit bland in that game.

But more often than not, they got this style of gameplay oh so wrong. The more open 3D environments makes platform based maneuvering more of a hassle to begin with, and the increased speed doesn't help matters in this regard. This makes for games that are much harder to control and much more frustrating than necessary. The fact that they clearly were rarely play-tested and, as a result, were loaded with game-breaking glitches was just icing on the cake.

Going back to Sonic Generations, watching the gameplay footage available thus far really shows off this stark contrast between the two styles. And with this evidence not only out there, but actually produced by the developers of the game, it really makes you wonder how it was that they managed to get so far off track with this franchise.

But I'm still interested in the game nonetheless. I'm mainly curious to play through the classic stages with their updated graphics, though seeing how they convert these stages to the 3D style will still be intriguing as well. And they're even throwing in a few of the stages from later games, such as City Escape from Sonic Adventure 2. I'm actually not sure if they're planning on doing the opposite and reverting the modern stages to the classic 2D style, or if they're just going to go the Sonic Colors rout and have sort of a mesh of styles for those stages.

So, as with all modern Sonic games, I'll be going into this one with some reservations. And yeah, it's a little more of the pandering to the old school Sonic fans that Sega's been doing the past couple years. However, I'm willing to give it a shot because, while it may not technically be anything new, I'm still interested to see what they come up with.
Posted by Chris Widdop at 12:15 AM