Here's how it actually went down. Dolph Ziggler and Vickie Guerrero were guest commentators during a match between Alex Riley and Jack Swagger. During the match, Vickie takes JR's hat, placing it atop her head as she steps onto the ring apron to cause a distraction. She places the hat on the referee's head, who then unceremoniously tosses it out of the ring. Then, after the match, Dolph Ziggler gets up from the announcer's table and stomps on the hat before placing it back on JR's head. And all the while, JR just sits there and takes it.

Now then, here's what should have happened. Vickie takes JR's hat and places it atop her head. JR is absolutely flabbergasted, but Michael Cole and The King manage to keep him calm. For now. Vickie steps up onto the ring apron, then places the hat on the referee's head. JR is livid, and he's struggling to keep his anger under control. The referee yells at Vickie, pulling the hat off his head and tossing it out of the ring.

JR snaps. He throws his headset off, climbs over the announcer's table, and slides into the ring. The referee tries to ejects him from the ring, but JR shuts him up. He points down at the hat on the floor and shakes his head. He then grabs the referee and tosses him out of the ring and into the crowd.

Riley and Swagger pause their match as all of this is happening. JR is eyeballing Vickie, but Swagger pulls JR around and starts to yell at him for interrupting his match. JR will hear none of it, so he flips Swagger the bird, kicks him in the gut, and delivers a good ol' stunner that sends Swagger twisting and turning through the air like a rag doll. Riley smiles at all of this, and pats JR on the back. JR smiles back, and the two share a brief laugh. The happy moment gets cut short, however, as JR kicks Riley in the gut and gives him a stunner as well.

JR begins to celebrate in the ring, downing bottle after bottle of his famous Bar-B-Q sauce. That's when Dolph Ziggler makes quite possibly the biggest mistake that he will ever make in the entirety of his career. While getting up from the announcer's table, he accidentally steps on JR's hat. Big mistake. JR stares him down. Ziggler stares back, terror in his eyes. Ziggler gulps, then as JR drops down to roll out of the ring, Ziggler high tails it out of there.

JR chases Ziggler all the way to the entrance stage before he catches up. He tugs Ziggler by the hair, dragging him back to the ring and tossing him inside. JR slides in, throwing a barrage of punches as he sends Ziggler to the corner. He proceeds to stomp a mudhole in Ziggler and walk it dry, driving the man down to the mat. But he's not done yet. He pulls Ziggler back to his feet, flips him off, and gives him, you guessed it, a stunner.

JR then looks out of the ring at Vickie, pointing down at his hat and demanding that she return it to him promptly. She does so, timidly stepping into the ring and handing him his hat. He snatches it out of her hand, placing it on his head. He gives Vickie a nod, and tells her to take her trash and kindly exit his ring. She begins to do so, helping Ziggler back to his feet, but then JR stops her. He tells her to wait, he has one more thing that she can do for him to set things right. JR then kicks her in the stomach and delivers a good ol' stunner to Vickie to a roaring approval from the crowd. They hit his Boomer Sooner music, and he goes to resume his Bar-B-Q celebrations, but not before giving one last stunner to Ziggler for good measure. 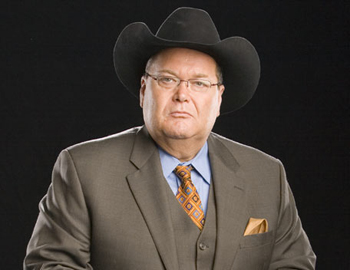