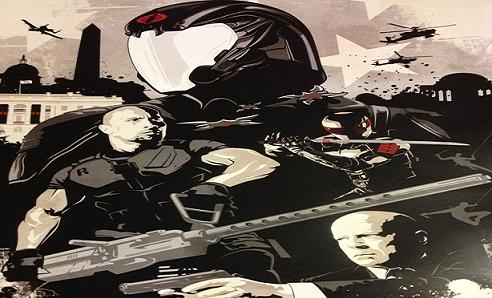 All I wanted from this movie was some good ol' fashion dumb fun. Sadly, this movie only got so far as the dumb part. This was just bad. And I actually liked the first movie, but this new entry in the G.I. Joe movie franchise is really just unbearable. The actors aren't even trying, and even the action is just dull and monotonous throughout. Basically, this is pretty much "Going Through The Motions: The Motion Picture".

Now this is something I never thought I'd say, but they killed off Channing Tatum way too early. I was actually kinda digging the bro vibe between him and The Rock, but then, oop, he's dead. And that's that, all we're left with after that is The Rock and two of the most generic characters who offer little to nothing of substance to the movie. Oh yeah, and then Bruce Willis also shows up, basically to just pick up a paycheck and call it a day. Seriously, why was he even there? He wasn't even trying, and really, neither was anyone else, save for Jonathan Pryce, who's clearly having a ball playing the villain Zartan in disguise as the President of the United States. But everyone else is really just there. Now, in the first movie, I'm not about to call the characters deep or anything, but they actually had definable personalities to themselves, and the actors all appeared to be enjoying themselves. So why, then, would it be so hard to carry that over to the new movie?

But more than anything that was prevalent in the first movie that was so sorely missing here was the action. Or, rather, action that was actually fun. The action scenes were big and ridiculous and over-the-top in the first movie. Here, though, it's mainly just boring, uninspired quick-cut shoot-em-ups through the whole thing. There is a ninja fight on the side of a mountain that I was very impressed with. It was very stylishly put together and well choreographed, though it honestly felt misplaced with the rest of the movie. In a sense, it's almost like they had two separate movie ideas, one focusing on The Rock and his Joes, and the other on Snake Eyes and the ninjas, and they just kinda mashed the two together. And I can't emphasize the word "mashed" enough, because it's just a real mess they left behind, and there were a number of occasions, particularly concerning Storm Shadow's character, that probably should have been better fleshed out.

I mentioned before about the sudden death of Channing Tatum's character, but his isn't the only anticlimactic moment of the movie. The final conflict between Zartan and his nemesis ends just about as quickly as it begins, and it's sorta just like, wait, that's it? And then there's a scene, which they even show in the trailers, where they succeed in completely wiping London off the freaking map. And... it just sorta happens. And nobody even says anything about it afterwards, almost as if it wasn't that big a deal. Not to mention Cobra Commander, who just kinda wanders on and off screen at random, and doesn't really do anything of note, before randomly disappearing without a trace at the end.

But where this movie really fails is in the logic. Now, this isn't the kinda movie where you're supposed to go into it expecting anything less than absolute idiocy, but even with my low standards of stupid, this was unbearable. When they entered the underground bunker to arrest Storm Shadow and lock him up alongside Cobra Commander and Destro, and started explaining the physics behind the place, I had to keep mentally reminding myself to just keep my brain shut off for another hour or so. And tell me, if the Joes are supposed to be a secret military organization, unknown to the general public, why, then, is the President holding a press conference denouncing their status? Also, I'm pretty sure the world is still a bit screwed over after the way they went about disposing of all the world's nukes. And I could keep going with this, but those are just a handful of many more similar examples of absolute idiocy that my brain just couldn't handle.

And the thing is, none of that would have bothered me one bit if this movie at least backed up its idiocy with even the smallest amount of fun. That's one of the reasons I was able to appreciate the first movie so much, because, at the end of the day, it remembered to have fun. But this movie completely disregards that aspect, which means that all we're left with is just a dull, dumb, stupid movie. Really, you'd never know that they pushed this back by a year to apparently fix certain issues. If this is what we got after an extra year's worth of work, I'd hate to see how the original was supposed to be.

I lost braincells today, people, and I didn't even have any fun doing it! So just remember this, kids: Say "NO!" to the new G.I. Joe. This one's really bad, and now you know. And knowing is half the battle.