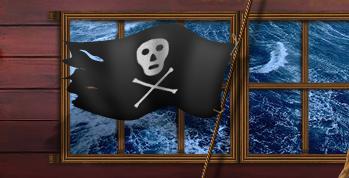 About a week or so ago, I overheard a conversation between my friends Rachel and Sharon. They were planning to set sail for St. Augustine, where they intended to become true pirates. Well, little did they know that at that moment, I had made plans of my own. And so, just as they set off, I stowed away aboard their ship, intendin' to go along for the ride in my own quest to become a true pirate as well.

It wasn't long before they discovered me, however, and they promptly threw me overboard to swim with the fishes in the freezing cold water. But when I made it back to land with this mighty fish in tow, the two had seen my worth and allowed me to join them in their quest. 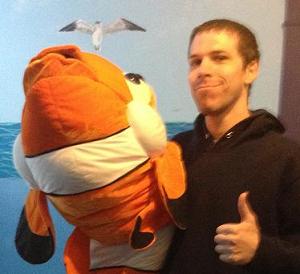 Actually, I lied. You see, we pirates tend to do that. But they never did actually toss me overboard. No, what really happened was that I dove in willingly, swimming through the cold ocean purely for jollies. And while I was there, I decided that I may as well retrieve the biggest fish that I could find, and so I did just that and climbed back aboard, laughing a hearty laugh as they shivered in fear at my madness. No, they weren't to be rid of me, I assure you that, and they had no say in the matter, I can assure you of that as well!

So after they finally accepted me for one of their own, we continued forward towards our destination. And upon reaching land, we came across a street- 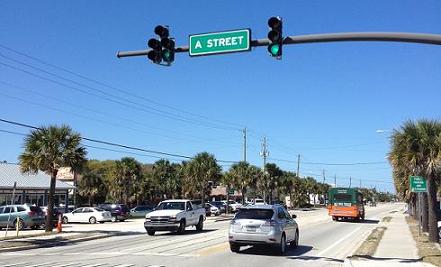 - that would lead us to that destination, that being The Pirate Haus Inn. The first thing we noticed upon entry of the Pirate Haus were the stairs, which were riddled with the lines of pirate songs. 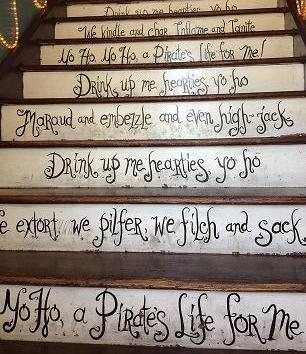 And as we climbed up each step, we knew that we had arrived at the right place. We met with the Captain and told him of our intentions. He was uncertain of us at first, until I presented him with my fresh catch. He saw our potential then, and set us out on a mission to prove our worth, were we to be accepted as true pirates. And so, our first order of business was to drink to our new arrangement. 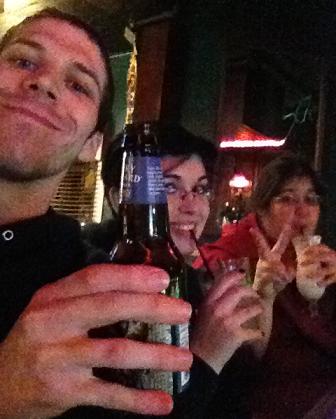 Now, I'm not entirely sure how we had managed to arrive at our tavern of choice, nor could I remember its name for the life o' me. But we had done such a good job of our first order that the remaining orders would have to wait for the morning. So on the next day, we were to arrive at the St. Augustine Pirate & Treasure Museum, where we were to find 12 hidden treasures within. 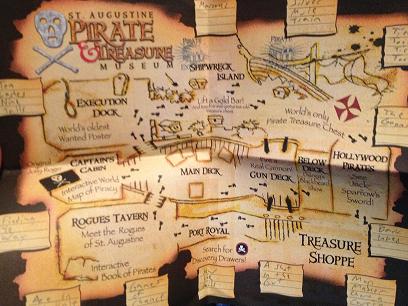 Well, we made easy enough work of that, and fired off a few canons to signal our success, and then a few more, just for good measure! After proving our worth, we were branded with the mark of the pirate and sent off across the way to ransack the Castillo de San Marcos in the name of the Pirate Haus. The soldiers there put up little fight, recognizing us for true pirates and wisely stepping out of our way. They knew better than to tangle with our crew. So we pillaged and plundered the fort, and immediately made way to the San Sebastian Winery to celebrate. They, too, put up little fight, as we managed to drink the place dry without so much as a penny leaving our britches!

It was around this point where I must have gotten a bit tipsy, because, as we stumbled around through the streets after our celebrations, we happened upon this place waving their flag: 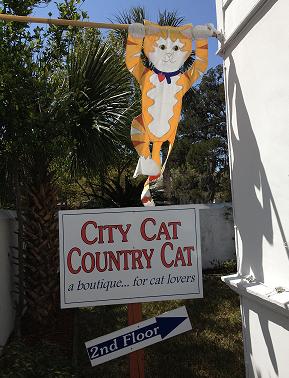 I could barely believe me eyes, but it was really there, like a treasure just waiting to be found by yours truly. And weren't it for my fellow crew to drag me out, it's like that I were never to leave that wonderful paradise.

So after a successful mission and even more successful celebrations, we had decided that our time here had expired. So, now true pirates, we three bade farewell to the city of St. Augustine and swiftly departed to new Horizons and new adventures, our black flag waving in the harsh winds of the cold sea...