Oz the Not So Great and Powerful 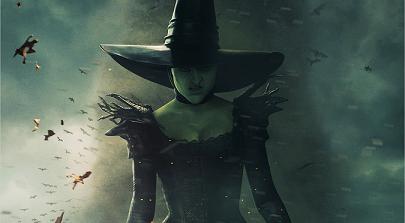 As it would turn out, Oz the Great and Powerful actually isn't all that great or powerful after all. It took me a while to come to this conclusion, but there comes a point when you realize that this movie really just doesn't work. And for me, that point is right around the time the Wicked Witch makes her first appearance.

Mila Kunis is decent enough as Theodora, and even though certain aspects concerning her character's romance with James Franco are forced, it honestly didn't bother me all too much. But once she makes the transformation into the classic green Wicked Witch of the West, she's honestly hard to watch. She's awkward and cringe inducing, and for all of the wrong reasons. She's trying to recapture Margaret Hamilton's performance from the original movie, but she just can't pull it off at all. And what makes matters worse is that the special effects when she's zipping around just look silly here. Seriously, they look even sillier than they did in the new Hansel and Gretel movie.

In fact, a lot of the effects in this movie are laughably bad, and the overall style the movie goes for just doesn't quite look right. The movie has a very artificial look to it, and scenes that are supposed to be mesmerizing and immersive just come off as forced as a result. The movie is just very ingenuine all throughout, and I think it just took me until the Wicked Witch herself showed up to see just how ingenuine this whole movie actually was.

Further forcing home this ingenuine feeling comes near the end when Oz fakes his death during the last stand against the Wicked Witches. His monkey pal suddenly starts crying for him, and I just couldn't understand why. Up until this point, Oz has proven himself to be a pretty terrible person. He's selfish and egotistical, and hasn't acted friendly towards the monkey at all. Basically, he's a dick, and everyone knows it, and the movie makes sure that we all know it. And in his last act before faking his death, he's lead everyone to believe that he's also a coward who's taken off to let them all fend for themselves. So then, knowing all this, why was the monkey crying over his death? I sure as hell don't know, but it was yet another obnoxiously forced and artificial moment in a movie filled with them.

So the effects are pretty bad, and the acting is pretty bad (seriously, James Franco should start seeking out more roles that require less screaming from him), and not only that, but the pacing is all out of whack as well. The movie is a little over two hours, yet it feels closer to two and a half or three. The movie could have easily been cut down to about 90 minutes, and perhaps making our visit in Oz a bit more brief would have worked to this film's benefit, rather than lingering on like it does and giving all of the crap plenty of time to settle in.

But even though I'm sorta tearing right into this movie, it wasn't entirely bad. There were certain aspects to the story that I felt were actually implemented pretty well. Like the original Wizard of Oz, once the magician Oz lands in Oz, he meets several characters who represent some of the people he had met in the real world, which I thought was a nice touch. I also thought it was pretty clever how the movie went about incorporating Oz's magical illusions as a means to battle the Wicked Witches' army. And I actually liked the little China doll girl quite a bit. She's easily the best thing about this movie, and the scene where Oz meets her and fixes her leg is probably the most powerful of the whole movie.

So I wouldn't say the movie was terrible, but it was pretty bad. It's an ingenuine experience with an artificial heart, and it lacks the genuine charm and whimsy that it's so desperately after. And coming out only a week after a much better family friendly fantasy in the form of Jack the Giant Slayer, I really can't recommend going out of your way to see this one at all.