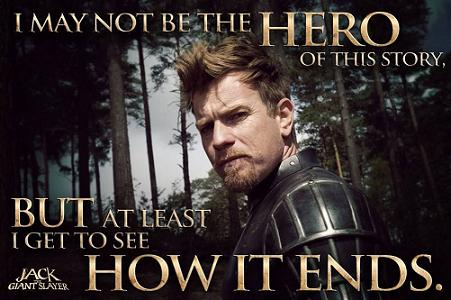 Oh who are you trying to fool, Ewan McGregor? Your hair is totally the hero of this story!

So I went into this movie just looking for some nice dumb fun, and it certainly delivers on that. I honestly didn't expect much, but the movie is actually quite good, despite a few questionable decisions made here and there. Yeah, it's one of those where you probably don't want to think too much about it, but it's also easy enough to ignore its missteps and just enjoy the ride while it lasts.

The story sees a farm boy named Jack, played by Nicholas Hoult, as he accompanies the king's men in their quest to rescue the adventuring princess after she's propelled up a massive beanstalk and taken captive in the mythical floating island of giants. And once they get there, the princess' betrothed begins his plot to use the giants to reignite an old war against the human race. Yeah, the movie is filled with cliches, and yet, all along the way, there's a whole lot of fun to be had here anyways, and the movie grows increasingly exciting as the stakes continue to rise.

But despite those continually rising stakes, the movie does a good job of maintaining a light-hearted mood throughout. The movie never seeks to be this grand, super serious epic, which it very easily could have become. There's a lot of genuine laughs to be had, even in the heat of action. And the actors all seemed to just be having a lot of fun with their roles, especially Ewan McGregor, who just steals this whole movie, right alongside his fabulously ever-evolving hair. 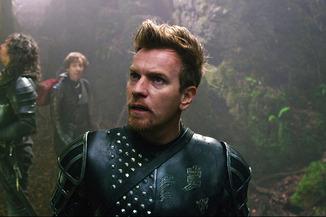 Seriously, pretty much every new scene he shows up in, his hair has radically changed in a glorious new fashion. Now, I'd like to hope that these constant changes in style were intentional, though I honestly have my doubts about that. His hair just has a mind of its own, and they just rolled with it, I'm sure. And it was awesome. 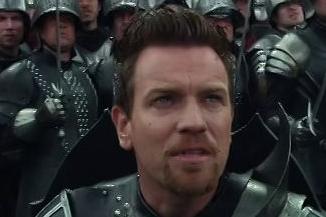 The action scenes are really fun and engaging (though apparently not engaging enough for Jack, who oftentimes finds himself wandering around elsewhere whenever any of the big action is going down). Hell, there's essentially an actual tug-of-war between the humans and the giants near the end that lasts for well over ten or fifteen minutes, yet they manage to keep it from ever growing boring throughout. But there's also a few scenes that have me wondering how the movie got away with a PG-13 rating. Similar to the countless number of beheadings in The Hobbit, there are some brutal, yet casual death scenes in this movie. Giants will just be biting people's heads off like it was an everyday occurrence. Now, there's nothing really graphic about it here, though it is interesting how movies are getting away with this sort of violence without getting slapped with an R rating these days (though I'd honestly be really interested in seeing a legitimately R rated version of this movie!). I suppose that's just the way times have changed these days.

The CGI effects also look really good for the most part. I'm not sure I'd go so far as to say that the giants look real, but the movie was consistent enough with its visuals that there was never any kind of distraction between what's real and what's not. There are some really gorgeous shots in this movie, though, especially as they're climbing the beanstalk, and once they're traversing through the floating island. Not to mention anytime that Ewan McGregor's hair is featured (we really can't discuss his hair enough). So for the most part, this is a really pretty movie. 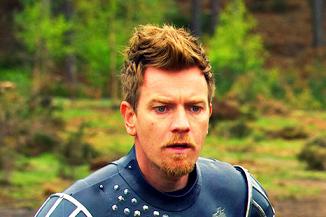 As I mentioned earlier, the movie does make a few questionable choices, though. For instance, the style they decided to go for with the prologue was just very odd. It's literally like watching a cut-scene from an old Playstation One video game. In a lot of movies these days, they go for a more traditional drawn animation style to play out their prologues, but the decision to go with such obviously dated CGI for the prologue just felt like a very odd choice to make. And then the ending feels similarly misplaced, jumping ahead to modern times and randomly ending the movie on the image of the modern world. It just didn't feel like it fit at all (though it did leave me wondering if they happen to get wifi on that giant island in the sky).

The editing in the beginning of the movie is also very off-putting. Before Jack and the princess actually meet, we get to see how much their lives parallel one another. And to show this, the movie cuts back and forth between the two essentially finishing each others sentences in entirely different scenes. Jack's uncle might say something, but then elsewhere, the princess' father will respond to something that sort of fits, so we'll jump to that and continue their conversation. It was cute when they did this during the prologue, but then they just keep doing this for about the first half hour of the movie, which quickly grew tiring. So I was very happy when Jack and the princess finally met one another and this obnoxious editing could finally come to an end. 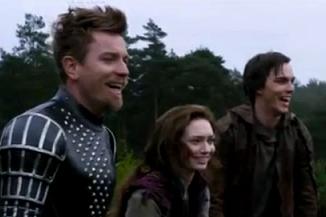 But like I said, it's one of those movies where you probably don't wanna put too much thought into it. And despite these flaws, I really enjoyed this movie, and I especially enjoyed snarking at it all throughout, pointing out how the king doesn't quite think things through all the way, or how the cat was the only one smart enough to just say, "Ha! Fuck that," and dip. So it's not a perfect movie by any means, and it's book-ended by some questionable scenes, but everything in-between was honestly a lot better than I was expecting. And the theater I saw it with seemed to really enjoy it as well. It's a really charming movie (what is it with Nicholas Hoult starring in such charming movies lately?), so I'd say it's worth checking out. And Ewan McGregor's hair, tho! 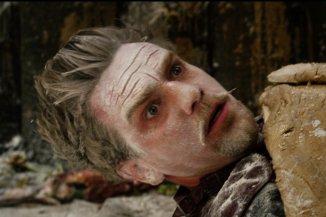