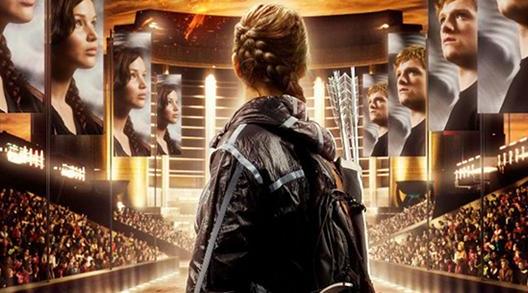 I caught a showing of The Hunger Games this weekend, and I've gotta say, I was very impressed. I honestly wasn't expecting much, basically for the movie to just be okay, but this far exceeded my expectations. Now I haven't read the book, so I was left with a few questions that may have been addressed there, though they were nothing that took away from the movie, just things that got me pondering, but I'll address those questions as I get to them.

So basically, we're following a girl named Katniss, who lives in a society where the children of lower class citizens are chosen at random to compete in a battle royale to the death for the entertainment of the upper class citizens. It's certainly a disturbing premise, and leads to some quite disturbing situations. And while this type of story has surely been done before, I felt that they did an impressive job here and presented it in a respectable manner that made it stand out.

I really liked the visual style of the movie. The higher classes are dressed in such campy, over-the-top attire, yet the movie itself never actually feels too campy or over-the-top. This was in contrast to the more down to earth style of the general population, which I thought gave a nice distinctive touch. I also really liked when they brought in the kids and showed them off with their flashy outfits. The fire suits were especially awesome, though Katniss' spinning dress sequence might have gone on for a tad bit too long.

Before the Hunger Games begins, the kids from the different districts were all brought in to train and prepare for the event. I found all of this really interesting, and I liked that they didn't go full montage on us. Once the countdown for the Games began, you could just really feel the anxiety that these characters were going through. And the moment the Games start, it gets pretty brutal right off the bat. Like I said, this film can get pretty disturbing, and watching a bunch of kids not only kill each other, but in some cases seemingly having fun doing so, was quite disturbing.

Jennifer Lawrence did a terrific job as the lead girl, Katniss. She pretty much carries the whole movie on her back, though the supporting actors did a fine job, too. I wasn't expecting Woody Harrelson to show up, but he brought the goods with him, even if his character did sort of jump from belligerent drunk to helpful advisor rather suddenly. And I didn't even recognize Lenny Kravitz, but I really enjoyed his character here as well. All the other actors were all fine, and while nobody in particular necessarily stood out, I didn't find anything too objectionable with any of the performances, either.

The movie didn't spend too much time bothering to develop some of the more minor characters, though they still all manage to feel very real. That said, the fact that they managed to make the death of a fairly minor character be as devastating as it was is quite an accomplishment. We honestly don't learn much of anything about this character, and we only spend maybe about 10 or 15 minutes with them, but in that short amount of time we're given enough reasons to really care for and pull for this character. And then the death happens so suddenly, and it's so genuinely striking.

However, this did bring up some of my bigger questions. After the death of this character, the district this character originates from starts to riot. Now, what was it about this one person's death that caused the people back home to actually get up in arms about it? Why did nobody riot over any of the other kids' deaths? Did they just not care about them as much? And were riots something that happened often, or was this the first time that the people got so distressed over the Games that they finally met their breaking point? I don't know, and I suppose none of this really matters too much, though it did get me thinking.

My other big question came when a boy comes to Katniss' aid later on as a result of that character's death. The thing is, how did he know that Katniss was helping this person? I didn't think that the participants in the Games were aware of everything going on around them like everyone watching at home. Unless that person was maybe just watching out for them from afar? Possibly, and perhaps these questions are addressed in the book. But as I said, they didn't really detract at all from the movie, though they did leave me wondering.

Anyways, great as everything was, I definitely feel that the times where we follow Katniss through the woods are definitely the strongest. Whether she's hunting deer at the beginning, or just roaming through the woods, avoiding the Games at all costs, I found that these quieter sequences really sucked me into the movie. And as a whole, the movie was really great, and it definitely peaks right around the time that that one character dies. However, once we then transition into the "star crossed lovers" portion of the story, the movie begins to fall a bit flat.

Basically, we learn early on that Peeta, the male representative from District 12 played by Josh Hutcherson, has a crush on Katniss. And trying to take advantage of this, the people running the Hunger Games manipulate things in order to get the two working together. And it's not that this stuff is bad or anything, it's just that everything before it was so good, and this part just didn't quite meet the same standards of quality that had previously been established. I was glad that they underplayed the romance between Katniss and Peeta a lot more than they could have, though.

I'd say that on a technical level the movie is pretty much solid, all except for one thing. That damn shakey cam. Someone needs to inform director Gary Ross that the era of shakey cam has ended. There were a few scenes earlier on that really could have been substantially improved had they merely decided to keep the camera steady rather than allow it wobble around like it did. And while annoying, the shakey cam during the action scenes honestly weren't too intrusive for most of the movie, though it got really bad during the big final fight. I've said it before, and I'll say it again, an action scene where I can't actually see the action is entirely pointless. You may as well cut to something else and just leave in the sound effects, because that would be about as helpful at deciphering what's going on, and at least then we wouldn't feel dizzy watching the movie. But yeah, that was my biggest complaint with the movie, though it honestly wasn't that big an issue.

Overall, I really, really enjoyed this movie. It was much better than I was expecting. Most of my issues with it are pretty minor, and while I can't say how it compares to the book, I thought that on its own, this was a very well put together movie that does a great job pulling just the right emotional chords. I loved the scenery and the visual style, and I can't stress enough how fantastic Jennifer Lawrence was here. Very impressed, and I can't wait for the next one!
Posted by Chris Widdop at 5:35 PM