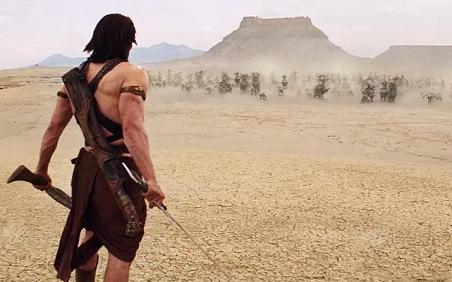 John Carter looked like a movie that was right up my alley. Boy was I wrong about that! Maybe I just went in expecting too much, but I was extremely underwhelmed with this exhausting, unnecessarily long movie. That's not to say the movie was bad, necessarily. It was just very, very mediocre overall. But it does have its moments where it really shines bright. However, there are just as many, if not more moments that just left me either cringing or face-palming throughout.

Now, I'm about to go into a fairly spoilerly rant, so heads up on that.

One of the big issues is that there's just so much going on in this movie. It just feels all over the place, and the first third of the movie especially is just a big jumbled mess. We see a little bit of the conflict on Mars, then we jump to Earth, where we're told about John Carter's untimely demise. Then his nephew starts reading John's diary, which then gets us going on the story of how John found his way onto Mars. We start meeting some of the local life as they capture John, until we cut away to some other political nonsense about a princess, Dejah Thoris, who needs to marry the enemy in order to bring peace. And there's more going on as well that I'm not going to get into, and all of this is sorta just thrown at us in a very clunky fashion. It's not that any of this is hard to follow, but it just felt like the movie never knew what aspect to focus on. It just sorta hops around quite a bit, and a lot of it felt like it could have easily been trimmed down on.

By this point I was already starting to have doubts about this movie, but then John Carter meets the princess, and that's when the movie's biggest flaw presents itself. The love story here is so, so forced. I was screaming "bullshit" at half the crap related to the romance plot. When the princess proclaimed that she "knew" John Carter through his actions, I could only sit back and groan. Bitch, you don't know him! And then when John tried to convince her not to marry the enemy, after he previously antagonized her for being selfish and not going through with it in the name of peace, I just lost it. What a freaking hypocrite, and really, what changed his mind so suddenly anyways? He's known this girl for, what, a freaking day? If that? And this was before he learned that the enemy was setting the princess up for a trap, too, so really, this sudden change of heart for him was complete and utter bullshit. But none of that compares to when, at the end of the movie, he actually proposes to her. Really? Really?!

I was just taken completely out of the movie by this point. See, I can buy the fact that after this adventure, he fell in love with this world and saw it as his new home. But for him to also fall in love with the girl, to the point that he was willing to just get over the unfortunate death of his family like it was nothing and marry another woman who he's known for maybe a day, I'm sorry, but I'm calling bullshit on that one. This is that psycho Romeo and Juliet kinda bullshit. Now I don't usually expect much from the love stories in big blockbusters like this, but I can't remember the last time the entire romance plot irritated me so badly. Maybe in Thor, though as forced as it was in that movie, it was so much worse here.

Ugh, so that was my main issues with the movie, though certainly not the only problems I had with it. There were a few other, more minor things that annoyed me, such as the quick, anti-climactic death of that one asshole Thark. All that build up after all these bad ass action scenes, and we're treated with little to no payoff to this big confrontation? And the entire scene where John learns how to walk on Mars' gravity may as well not even exist, as mere moments later he suddenly just miraculously masters it with no effort at all. Also, they insisted on using white subtitles against bright backgrounds, making them almost impossible to read half the time, though gladly they were pretty quick to introduce a plot-device to remove the need for further subtitles.

But enough bitching, right? After all, this movie's not all bad. There are several good things about it, too. Some of the action scenes are pretty exciting, and the special effects in this movie look absolutely tremendous. The gallons of blue blood lead to some particularly awesome visuals at times, too.

Also, the movie is oftentimes quite funny. The humor just flies at you in the most unexpected ways. Even when they're doing a continuous gag near the beginning, with John constantly escaping his captors, they just find more and more ways to one-up the previous escape in the most humorous fashion. It was a nice touch for them to add to a movie that otherwise takes itself far too seriously.

I also found the mythology pretty interesting overall, and there's some fairly imaginative ideas here. In fact, watching this movie has me interested in checking out the novel it's based on by Edgar Rice Burroughs, which I've never been one to do after seeing a movie, no matter how much I liked it. But I'm just curious about exploring some of these ideas a little more, and I'm also curious to see just how faithful this movie is as an adaptation.

While the proposal at the end took me out of the movie, I do have to admit that they managed to reel me back in, as the final moments of this movie are probably the strongest as well. When John Carter is sent back to Earth and begins his desperate search for a way back, I thought this whole sequence and the final reveals were played out very well. I was left satisfied in the end, and the movie definitely concludes on a very high note.

Overall, the movie has its moments, but my god can it be obnoxious. If you were already looking forward to this, then I suppose it's worth checking out, because there are definitely some things here that work. However, there's probably just as much that doesn't, and so if you weren't interested in it already, you're honestly not missing a damn thing by skipping this. It's an exhausting experience, and one I'm not likely to revisit anytime soon.
Posted by Chris Widdop at 7:42 PM