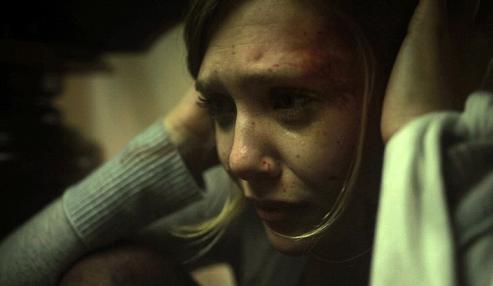 Okay, now here's a good freaking horror flick! Silent House is genuinely scary, creepy as hell, and super tense throughout. And unlike so many other horror movies these days, it never relies on cheap, overly predictable jump scares to force home its horror aspects. Instead, this one provides a mood of dread that keeps you constantly on edge, and uses an interesting "single take" technique that keeps us intimately close to our main character and her terrifying experience.

Elizabeth Olsen delivers yet another great performance here. Her father and uncle are fixing up an old house to try and sell it, but it's not too long before they realize they're not the only ones home. The film is presented to us as if it were shot in a single take, which was a really interesting choice. I was a bit skeptical at first, as single take shots can have a tendency to become distracting if you keep noticing they never cut away, though that was hardly ever the case here. It was generally unnoticeable for the most part, and actually allowed for some really interesting shots. For instance, in a scene where Olson's character is running away from the house, the camera moves in a smooth, yet frantic motion, sweeping through the grass and following the action in a very fluid fashion that really stood out to me.

But as I mentioned, the camera never strays too far from Olson, and as a result, we're able to really get a feel for her horrifying situation. We're constantly by her side as she's walking alone through the darkened house. We're hearing all of the creaks and bangs as she does, and save for one or two minor teases, we only get to see whatever it is she's seeing. The film really grounds us in her perspective, which makes for a satisfyingly tense experience.

Where this film also goes right is in its sense of security. Whenever our characters are wandering in pairs, its like the movie puts us at ease for a moment, like everything will be okay, which I thought was a nice touch. Though even then, it slowly, gradually builds the tension back up, and just when you're feeling complacent, the movie snatches away your safety net and amps the tension back up. I just loved how this movie handled such sequences, and the way it really does play with your fears.

The further along we get in the movie, the more creepy things become, until we finally hit the big twist ending. And really, here's where my only minor complaints come in. Without giving away too much, the ending pretty much changes everything about the movie up to this point. It basically takes a movie that was one kind of horror film and turns into an entirely different kind of horror film in the process, so I'm really not sure how this'll hold up upon multiple viewings. However, concerning the twist itself, I was initially unsure about it, though upon some reflection, I really don't have too much of a problem with it. It works, for the most part, and it's not exactly pulled out of nowhere, as the movie leaves a trail of little hints and clues throughout that could have easily gone unnoticed, but brings it all together for the big finale. It's something different, though like I said, it changes everything. But while I can't say if it ruins the movie upon a second viewing, for this viewing at least, this movie was great.

Olsen was awesome, the mood and setting were frightening, and the movie wastes no time before it starts introducing its horror aspects, only to slow things down in order to gradually build up the dread. This movie was genuinely scary, which is a real treat in a day and age where so many horror movies just get it so wrong and only aim for cheap startles. So yeah, if you're looking for a seriously good new horror flick, check this one out. Probably the scariest movie I've seen in years.
Posted by Chris Widdop at 1:32 PM