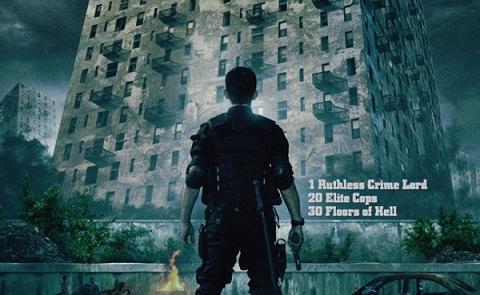 The Raid: Redemption is just 90 minutes of non-stop, balls to the wall action. And, from start to finish, it is absolutely spectacular. Right off the bat, this movie doesn't waste a moment as we follow a squad of elite cops on their way to infiltrate the residence of an untouchable crime lord. And we soon find out just how untouchable he is, as the entire complex emerges to wage war against the police force.

The action in this movie is absolutely brutal. It pretty much starts off as just a shoot 'em up, ripe with gun fights and explosions and the like. But the combat in the film has a natural flow, as it gradually progresses from one kind of action to another, becoming more and more primal in the process. In this regard, the film sorta gives us a little bit of everything that you could want out of an action movie. Once the guns go away, a slew of machete wielding "neighbors" make their entrance, and we're treated to an onslaught of knife fights. And just as fluidly, the knives eventually go away as well, and all we're left with is hand to hand combat.

The better part of the second half is pretty much a straight up martial arts flick, and holy crap are these fight scenes intense! And they all go on for such a long, long time. Yet, unlike other action films where your mind might begin to wander, the intensity of the fights is just so hardcore that it commands your attention throughout. Seriously, I can't tell you how many times I was just shaking my head in awe at the spectacle on display.

And yeah, there's really not much else to talk about, as this movie truly is just one long, flowing action sequence. There's actually quite a bit of creativity in the way the action unfolds, and like I said, I really dug how as the movie progresses, the more stripped of their advanced weaponry our characters become. The story is fairly simple, so despite being subtitled, it's very easy to follow along. And there's a few twists and turns, some of them predictable, some not so much. But really, this movie is all about the action, and in that department, it definitely delivers in spades.
Posted by Chris Widdop at 11:02 PM