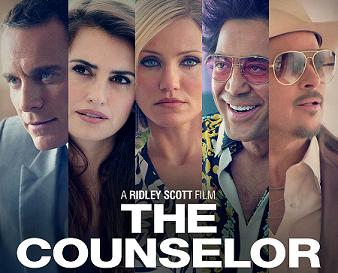 So yeah, I went into The Counselor pretty much solely for Michael Fassbender, but outside of his involvement, I really wasn't looking forward to this movie at all. It just looked really bland and generic to me. And so, despite so many dependable names being attached, I remained mostly reserved going into this thing, and the fact that early word has already been pretty negative had further lowered my expectations. However, I must say that this movie was quite a pleasant surprise, and very much plays out almost like a modern day Shakespeare piece.

Michael Fassbender plays a lawyer who's only ever referred to as Counselor, and he gets involved in a drug trafficking scheme down in Mexico that quickly becomes more than he can handle, resulting in a huge mess for everyone involved. The movie plays with themes of both love and greed, and how these two things can come back to bite you if you're not prepared for what you're getting yourself into. And the way this movie approaches both subjects as a whole through its dialogue is almost seamlessly interchangeable. In fact, the movie is very dialogue heavy, and it was early on that it really pulled me in with the very Shakespearean tempo of the delivery and sensibilities of the conversations at hand, which I found to be really endearing. And once I was able to approach the film from that perspective, I found myself really digging the hell out of it from that point on.

I mentioned before how there were a lot of talented names attached to this project, and they all really come forward to add their contribution in making this thing work. Ridley Scott's solid direction truly complimented Cormac McCarthy's smart and clever script, and the acting all around was really good as well. In addition to Fassbender, the film also stars Penelope Cruz, Brad Pitt, and Javier Bardem, who all brought the goods and really worked well together on screen. But surprisingly enough, the one who really stole the show here was Cameron Diaz, playing the super-sexualized manipulator who really is the driving force of this plot. It's not the most subtle of roles, but damn does she dive right in and really make you believe that she's this cold, calculating bitch.

While the film definitely maintains a theatrical vibe with the way most of its dialogue heavy settings play out, there is a little bit of action at play here as well. There's not a whole lot of it, but when the violence happens, the movie gets in, gets it over with, and gets out, but in that short amount of time, this thing gets really bloody and brutal really fast. There's gunfights that don't last too long, but it doesn't take long for blood to start spraying, either. Not to mention the graphic beheadings that are on display. So yeah, certainly not a film for the squeamish.

So I ended up really liking the hell out of this movie, though there are a few things that I could nitpick it for. For instance, there's probably an overuse of extreme closeups on people's faces throughout, which became noticeable, though wasn't necessarily a detractor, even if some of the shots felt a bit uninspired. And there are scenes where Fassbender is talking to his fiance on the phone, but we can only hear his half of the conversation, leaving gaps of silence where she would be speaking. This wouldn't be a problem, except for the fact that throughout the rest of the movie whenever someone's talking on the phone, we're able to hear both ends of the conversation, so it took me out of the movie a bit during these scenes, and left me wondering if perhaps something was wrong with the sound in the theater. But really, like I said, that's all really nitpicky, and outside of those sorts of things, there's really nothing too much I can harp on this movie for.

It's a bit of a long one, but, again, after I was able to take the movie as a modern Shakespearean work, I was able to roll with the run time. And it remains ever intriguing all throughout, with interesting anecdotes and poetic insights that'll leave you thinking. I really didn't expect to be this impressed by this movie, but sure enough, behind the great collaboration of minds at work behind the camera and the strong performances on screen that really sold the material, I gotta say that The Counselor was pretty damn well done.