Cat of the Day: Honey 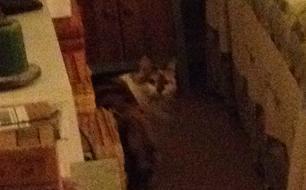 Honey is my Grandma's other cat who we took in a few month's back, and she is today's Cat of the Day!

However, unlike Pepper, even after all this time, Honey hasn't warmed up to me in the least. The mere sight of me stepping into the room will send her running for the nearest hiding place, usually pausing to look back and hiss at me, just for good measure. And like trying to capture the Loch Ness Monster or Bigfoot on camera, the picture provided is probably about as clear a shot as I'm bound to get of her. But even so, it's actually a fitting enough picture anyways, since that's pretty much the way I always see her, from a distance, and just before crawling away into whatever hiding spot she can find.

So yeah, that's pretty much all I've got on her. But you know what, this is her day, and if she wants to run and hide away, then by all means, go for it, Honey!

(Also to note: Though they're both calico cats named Honey, unlike some of the other cats featured in the Cat of the Day series, this particular Honey is actually not the same Honey who's featured in Velcro: The Ninja Kat.)