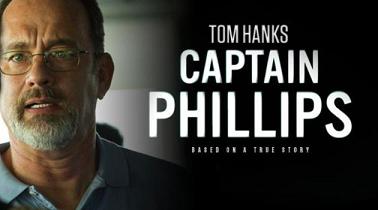 Listen up. I am happy to report that the new Tom Hanks thriller, Captain Phillips, has more than met my expectations. It's a solid film through and through, with Hanks putting on another classic performance as the Captain.

And it's a good thing that Hanks delivers, because he really was the sole selling point to this movie for me. I couldn't get enough of his Boston accent in the trailers, and his line delivery throughout the course of the movie has taken what would otherwise just be your typical average dialogue in the hands of anyone else, and seemingly turned them into awesome tag lines that you might find on the movie poster. 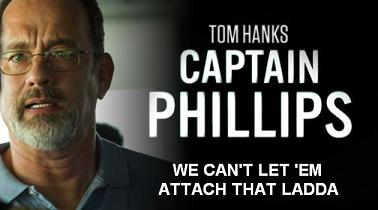 Sadly, this particular line from the trailer didn't actually make it into the movie, but trust me, the whole film's filled with these kinds of random one-offs that Hanks is able to elevate and really give them his special touch. And in addition to Hanks, the Somali pirates all also do really good jobs here as well, though admittedly, the rest of the cast, including key members of the Captain's crew and military figures, act like they're bored to be there more often than not. But gladly that couldn't be further from the case with Hanks, who really sinks into his role and becomes the Captain.

Speaking of the pirates, I did have some reservations going in based on the latest trailers, which appeared to try and add some sentimentality to them. But the movie really did a good job of balancing this aspect out, allowing us to understand why the pirates were doing what they're doing, without ever going overboard with it to the point that we can actually relate to or ever really feel sorry for them or anything like that, so the movie handled this really well I felt. 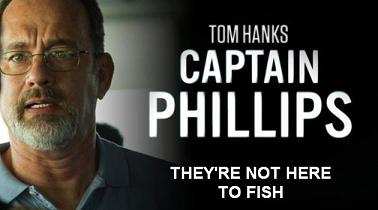 But otherwise, this was a really solid flick from start to finish, and one where, despite knowing how it ends, being based on a true story and all, it still very much remained a pretty intense and emotional thriller all the way through (which there sure have been a lot of these lately, haven't there?). The one thing I did take a bit of issue with, though, would be the constant changes in POV. I was fine enough when they jumped between the Captain and the pirates, but then once the military gets involved it does get just a bit jumbled. And especially coming off of Gravity, which so superbly pulled off a tale of survival without ever pulling away from its main star, I couldn't help but wonder while watching this just how much stronger the movie could've been had they allowed some of the stuff with the military to happen off screen, and just stuck with Captain Phillips throughout his capture.

Still though, that little pondering aside, it was still a really good movie, so that's not that big a deal in the end. The actors did a great job bringing their characters to life, and the script provides quite a bit of depth to a lot of these characters without overdoing it. And it all comes together for the happy ending that we all know about going in, but even so, it still remains very satisfying to see it all play out before our eyes. So just remember this, men, piracy doesn't pay, so don't illegally download this movie, go out and see it the right way, or else the Navy will kill your ass! 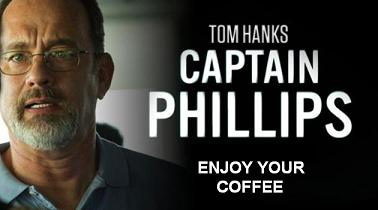