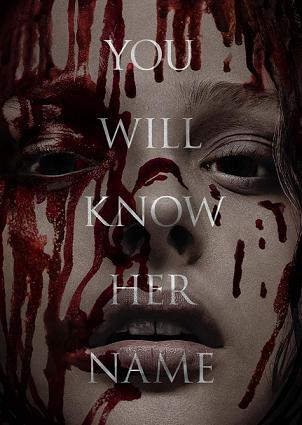 So the new Carrie movie was pretty much exactly what I had hoped and expected it to be. An awesome movie, with an especially awesome performance from Chloë Moretz in the title role, who once more proves herself to be one of the most consistently impressive actors working in Hollywood today.

I've never actually seen the original movie or read the book by Stephen King, so I can't say how this compares to those. But on its own merits, I quite liked what we got from this remake. The plot is well structured and obviously modernized from its original incarnation, and I thought the updates worked really well. And in many regards, with the way that Carrie comes to possess telekinetic powers which she ultimately uses to unleash her pent up rage against those who've wronged her once she's pushed to her breaking point, this movie reminded me quite a bit of last year's Chronicle (or did Chronicle inadvertently remind me of Carrie? Hmm...). I was a huge fan of that movie, and for similar reasons, I was really able to relate and connect to this story as well.

I really loved the raw and intense imagery once the carnage begins near the end. And, in addition to Chloë Moretz, I felt that all of the acting was perfectly fine for the most part. You really do come to either care for or completely detest the various different characters we encounter. But the one who really carries this movie and truly elevates it would be our star, Chloë Moretz.

Simply put, she outdoes herself again, perfectly balancing a character who is shy and reserved while around her peers, yet more open and worrisome with her situation at home with her crazy mother. It's a truly believable performance that she just loses herself in, especially at the end, when she becomes a legitimately menacing presence, soaked in blood as she unleashes her furious wrath. 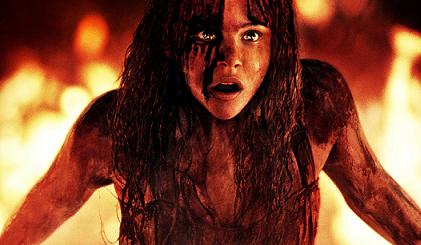 I'm not kidding when I say that she's one of the most impressive actors working today. She's been impressing me in just about everything I've see her in since I first discovered her as the foul mouthed Hit-Girl in Kick-Ass. She pretty much captured the world's attention with her standout performance, not to mention the novelty of seeing a young girl swearing like a sailor as she casually and stylishly slaughters thugs left and right. And she followed that up with what I felt was an Oscar worthy portrayal as the vampire Abby in Let Me In, another great remake and a role for which I still feel she deserved the awards recognition that was sadly denied of her. For many people, she's still just Hit-Girl, but after Let Me In, for me at least, Chloë Grace Moretz had arrived, and I've been a huge fan of hers ever since. 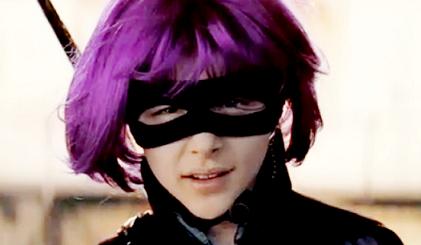 She's since gone on to give another stellar performance in Hugo, as well as being one of the few shining aspects in Kick-Ass 2, doing her part to make the absolute most of an otherwise forgettable sequel. And even going back and seeing some of her earlier work, you can see that she's been a natural talent her whole life, such as in The Amityville Horror remake, where she gave a solid enough performance at a super young age that's even better than the movie itself (and better than the movie deserved, quite frankly), or even holding her own in the phenomenal (500) Days of Summer. In fact, her only performance that she didn't quite pull off was in Dark Shadows, but I blame that more on the fact that Tim Burton has become a bit of a hack director in recent years. I mean, seriously, how much do you gotta suck to somehow get a bad performance out of Chloë Moretz? 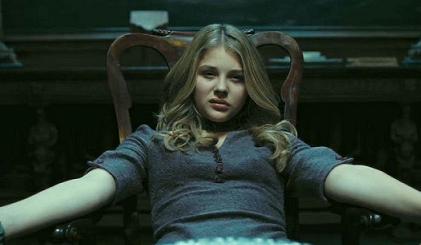 But even with that one little hiccup, Ms. Moretz has proven herself time and again to be one hell of an actor. And that she's already given us as many great and memorable performances at such a young age is truly astounding. She outdoes herself at every given opportunity, and she changes it up with a wide rage of varied characters throughout her catalogue of films, each so different and unique, and yet so believable and full of genuine life and feeling. And if she's already this good now, I can't wait to see how her career continues to unfold. She has a hell of a bright future ahead of herself, and it really is only a matter of time before she finally snags up that gold statue, because you're almost always guaranteed greatness of some sort when you see her name attached to a movie.

She's become so consistent that I pretty much will see any movie she's in, even if solely for her. And truth be told, that was the case with Carrie, too. Once I saw that this was essentially a Chloë Moretz vehicle, I was right on board, and I was not let down. Even despite a terrible theater experience where I was surrounded by assholes texting and providing their unwanted commentary all throughout, she was able to cancel them all out once she appeared on screen, drawing me in and allowing me to enjoy the movie despite their constant distractions.

So yeah, Carrie was an awesome movie, with another awesome performance from our go-to star. It's worth watching for Chloë Moretz alone, but the intriguing plot and bad ass visual effects really do all come together under some solid direction to make this yet another one of her movies that's certainly worth seeing.