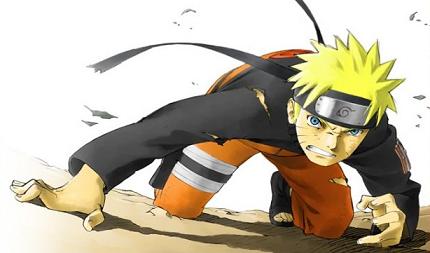 The first Shippuden movie is also the only movie in the series that lacks a proper subtitle. It's a flawed movie, and most of the duration is chock full of moments that one would only find in the very worst of filler episodes. However, despite a rocky start, this thing does pull itself around for quite a powerful conclusion, so it's not all bad.

The story here is that an ancient evil has returned with plans to take over the world, but his first order of business is to eliminate a priestess who is capable of putting a stop to his plans. Naruto and Sakura team up with Neji and Lee this time around in order to protect the priestess from her onslaught of pursuers, and upon meeting, we learn that the priestess possesses the power to see how the people around her will die, and she foresees Naruto meeting his demise over the course of this very mission.

This movie's biggest issue lies with the way it handles several of the main characters. This is a prime example of just how out of touch the writers are with some of these well established characters, and how they've failed to see the natural progression of their development within the main series. For instance, Naruto is acting far dumber and goofier than he should be. He's closer to his earlier part 1 persona than anything else, and you'd really never know just how much the character's matured over the timeskip, at least until they suddenly decide to shift his character in that direction near the end. But by that point, it's too little too late.

But bad as their handling of Naruto was, by far the worst offender is Neji. He's back to acting like his old arrogant self, belittling and disrespecting Naruto at almost any given chance. This completely disregards that Neji hasn't acted this way since back when Naruto defeated him during the chunin exams. After that point, Neji had a change of heart, and has only the utmost of respect for Naruto, constantly singing his praises and even looking up to him. However, whoever wrote this movie clearly couldn't grasp that particular development of Neji's and instead decided to go back to making him a disrespectful little asshole, which is completely disrespectful to the source material.

So those are the major problems with this thing, and the fact that they're a constant presence throughout the majority of this movie makes them all the harder to forgive. But that aside, the rest of this thing is actually pretty decent. The priestess is an especially well handled character, I thought. I loved her design, and her development she goes though has a much more natural progression than we usually get. There's no sudden conversion or anything, we merely learn bits and pieces about her hard upbringing that show us how she came to be the spoiled brat that she portrays herself as being, though really, deep inside is a girl who's hurting, not only from how she's been treated, but from her own actions. She's a surprisingly deep character for a movie such as this, but you really do grow to know and care about her over the course of this thing.

The fighting scenes are serviceable enough, and the filler villains aren't too unfavorable. And this is also the first movie where they really try to shoe-horn in as many characters as they can, though it didn't get too out of hand this time around. But overall, despite this movie's flaws, it really does take a turn for the better near the end, with beautiful visuals and touching moments that really lift things up. So it ends on a really high note, and even includes one of the funnier after credits sequences that implies Naruto maybe getting a little action with the priestess, which was pretty humorous. If only the opening acts coulda been nearly as strong, then this really coulda been a pretty damn good flick. But on the contrary, had it not picked up so much in the end, then this movie coulda been truly terrible, so at least as a whole, it's not bad, and is still generally entertaining.