Legend of the Stone of Gelel 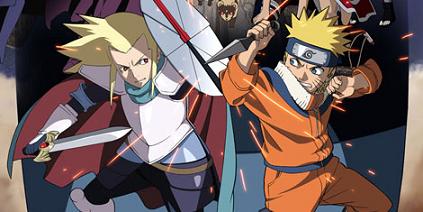 With no new Naruto manga chapter this week, I guess I'll get my Wednesday fix by reviewing another Naruto movie! This time we're on movie 2, Legend of the Stone of Gelel. And, while it's not a terrible movie, it's a pretty significant drop in quality from the previous flick, and is a fairly generic and typical Naruto filler fair.

The story starts off as Naruto, Sakura, and Shikamaru take on a straight forward mission to retrieve a missing ferret (who Naruto humorously refers to as a cat). But what starts off as an easy enough mission soon becomes much more complicated, as they're ambushed by a group of characters straight out of a more medieval setting. Basically, a typical instance of filler artists coming up with original, uninspired character designs that don't fit in with the Naruto world, though here they at least give some explanation for the drastic clash of styles, as these new characters are from another continent across the ocean. But anyways, the villains are in search of a source of power known as Gelel, which they intend to use to "create a utopian world free from war", or so they'd like for us to believe.

There's really nothing too spectacular about this movie that stands out. Like I said, it's pretty typical stuff, with the same themes being driven home, and Naruto converting a character away from the darkness, all that good stuff. The only thing this movie does that is slightly different is the fact that these new characters come from a far distant land in the Naruto world, one with a bit of a more western style, which lends to the idea of this world being more akin to our own, in its own way.

The fight scenes are decent enough, with Gaara and Kankuro getting involved in the action as well (though the lack of Temari is curious, especially considering the anime team's particular tendency to totally ship her with Shikamaru at any given opportunity). And we also get treated to the most forced Sasuke cameo ever. I figure that since he's technically a main character, the anime team felt compelled to include Sasuke to some capacity in their movie, though thankfully this would be the only instance of this happening throughout the rest of the movie series.

But probably the most interesting aspect of the movie comes from the main villain. After he transforms into his final form, there's several characteristics that are strikingly similar to the current Obito in the manga. Things such as his tendency to refer to others as worthless trash, and the fact that he has shape shifting orbs on his back, which is an ability that Obito has only just recently acquired in the past few weeks in the manga. In fact, it's so similar that it actually makes me curious if Kishimoto wasn't possibly influenced by this movie's villain when coming up with some of these traits for his own main villain.

But anyways, other than that, there's really nothing much else to say about this movie. It's entertaining enough while it's on, and it's not as terrible or as frustrating as some of the other movies can get. But it's a far ways from being something that I could honestly recommend. It's essentially an extended filler episode, just maybe one of the more watchable ones.