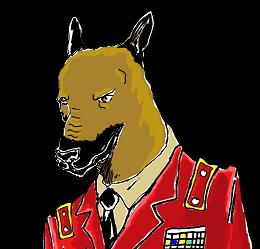 Colonel Bullet is the commanding officer of Camp Leatherneck, and oversees the operations of the military brig known as The Web. And after the recent mishaps at The Web as a result of the Ninja Kat and her hamster friends, Bullet has been called to stand before the High Council and answer for these blunders and more.

Though he likes to put on a proper and authoritative face, behind the scenes, Bullet is a scrambled mess of a dog. Constantly anxious and in a state of frantic worry, it's no wonder that he appears to be losing control over his own command. But despite any setbacks, he still remains a skilled fighter, and has earned his rank through his undying loyalty to the Devil Corps. And when placed in the position to truly prove his worth, his chaotic nature will make him a near unstoppable force to reckon with.