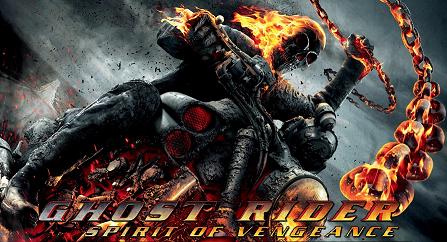 Holy god, YES! This movie was AMAZING! So much better than the first, and so much badder, too! In fact, other than the fact that they both star Nic Cage, this movie has literally nothing at all in common with the first, so if you didn't like that one, please don't let that detract you from seeing this. Seriously, this may quite possibly be the very best "bad" movie I've ever seen. It's not just so bad it's good, it's all in all gloriously bad! And I loved every second of it!

So lets get into the story. Nic Cage is cursed with being the Ghost Rider. And in order to lift this curse, he needs to finds some kid and save him from becoming the devil's next vessel. That's basically the gist of it, it's fairly simple, but it works a lot better than the prior movie's strange villain gauntlet format. But honestly, nobody's going into this for the plot, it's all about Nic Cage, and boy does he deliver!

While explaining how he became cursed, Nic Cage mentions that he made the biggest mistake of his life once his father got sick. I jokingly said that his mistake was probably doing this movie, but by the end, I withdrew that statement entirely. He is just so great in this movie, and he's even more maniacal than you'd expect. He just makes the most over-the-top facial expressions, popping his eyes out, twitching his neck, laughing at inappropriate times. He pretty much became a walking, talking meme, and I just know that this movie is gonna produce so many new crazy Nic Cage gifs. But you could tell he was just having a ball with this role, and frankly, so was the rest of the cast, as well.

Johnny Whitworth gives a good go of his own in the crazy department as well. He plays Blackout, a supernatural villain with the ability to decompose anyone or anything that he touches. As he plays with his new abilities granted to him by the devil, this leads to one of the funnier moments involving a Twinkie. But this guy is great from the beginning, and he gets even better after he gains his powers. Like I said, you can just tell he's having a blast with this role, and his snicker is a thing of beauty. Idris Elba also has lots of fun with his own role, playing Nic Cage's biker sidekick and wine aficionado.

But I just gotta talk more about Nic Cage again, and how phenomenal he was in this movie. I can't stress enough how entertaining this guy can be. He knows exactly what kind of movies he's making these days, and he embraces them full on. But the lines this guy spews, my god! So many awesome one liners, and always with the most perfect timing! Whether he's shooing "bees" out of kids' faces or pissing like a flamethrower, Nic Cage delivers in a way that only Nic Cage can.

The action scenes are off the charts. Whenever Ghost Rider enters a new vehicle or piece of heavy machinery, he transforms said machinery into a flaming mass of destruction, and boy do they lead to some exhilarating set pieces. They just go so over-the-top with the action, there's rocket launchers, car chases, guns, explosions, you name it. And the best part of all is that these scenes are filmed so coherently. I can't express how glad I am that the whole "shakey cam" experiment in films has finally gone by the wayside, and there were a few times where I thought that this movie might fall into that pit trap. But thankfully, that wasn't the case, and we were able to clearly see all the carnage in all its flaming glory!

So the movie was great. I had a blast, but what made it all the more better was the audience I saw this with. I was so happy to be in an audience who knew what kind of movie they were getting into. This was an awesomely bad movie to the core, and the whole crowd ate it up. The theater was dying from laughter by the end of it. Seriously, this movie is hysterical, and you'll bust your gut laughing at the insanity on display.

Don't illegally download this movie. Go see it in theaters, or you're going to Hell!
Posted by Chris Widdop at 12:42 AM