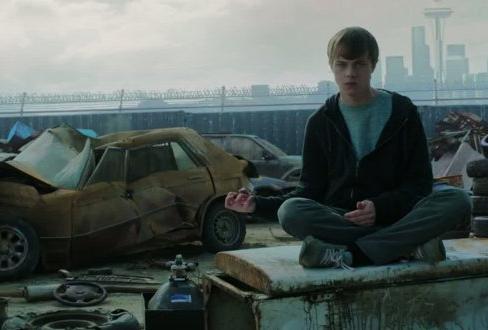 Chronicle is the latest in the found-footage genre of movies. This one takes a superhero approach, as a group of high schoolers are exposed to something that grants them telekinetic powers. They're able to move objects with their minds and fly, and the more they use their powers, the stronger they become.

Unlike other found-footage style movies, such as The Blair Witch Project or Cloverfield, this movie uses a variety of techniques that allow for a much clearer image throughout. This eliminates a lot of the shakey cam, which is always a blessing. Since the characters have telekinetic powers, they often have the camera "levitate" around them, allowing for the movie to be filmed in a more traditional style, while still maintaining the found-footage feel. Also, anytime someone else with a camera shows up, we sometimes view the movie through their lens, allowing for multiple perspectives throughout. This style actually works quite well, and allows for a lot of neat shots as the action really accelerates towards the end.

In the story, we follow Andrew. He's a high school outcast, has no friends at school, his father's a drunk, and his mom is sick. So yeah, the kid's pretty messed up, and in order to cope, he decides to start documenting the things going on in his life. Only his cousin, Matt, pays him any attention, as he tries to help Andrew break out of his shell and have some fun. The third kid, Steve, randomly inserts himself into the story, and the whole origins portion, as they discover whatever it is buried underground that grants them their powers, does feel a bit forced. But once they acquire their powers, the movie really picks up from there.

Watching the three experiment with their new powers is really cool. They start off small, such as building Lego sets with their minds and stopping baseballs in mid-flight. But then they begin to think bigger, until eventually, they're flying through the clouds tossing a football around, in what is one of the most exhilarating scenes in the movie.

So things seem to be going well for these guys, and Andrew's two new friends actually help him with his high school status a little. But just as soon as things are looking good, they begin to crumble back down for Andrew. And now that he has the power to do so, he lashes back out at society. In some ways, this is like watching the gradual rise of some big super villain. But really, it's not that he's a bad kid, he's just an angry teen, and he's let his emotions get the better of him. And it's a really natural progression, which is elevated by a very believable performance.

This is a movie that's fun to watch if only for the spectacle of the effects, which only grow bigger and better as the movie goes on. But even the story itself is very entertaining, and relatable in its own way. The presentation also differentiates this one from the rest of the crowd, so it's not just a been there, done that experience all over again. I only had a few minor nitpicks, mostly relating to the origins aspect of the story, as well as near the end, when one of the shots stays on Matt's face for so long, while so much action is going on around him. I just thought that was a bit odd, though nothing that takes away from the movie. Overall, I'd say check this one out, it's an enjoyable movie if nothing else.
Posted by Chris Widdop at 4:44 PM