... and yet here I am, talking about it. Basically, despite the horrible trailers telling me otherwise, I actually expected this to be okay, just a fun little action flick. But, as it would happen, I was wrong. 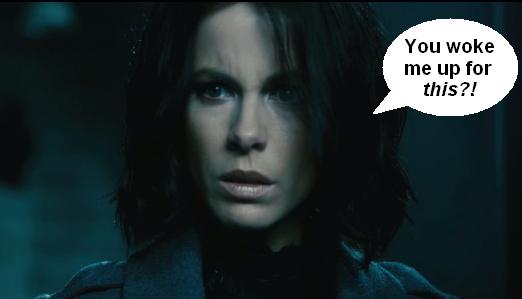 I just don't even know what to do with this. This one completely misses the mark of what made the first three Underworld movies good. I mean, the first two weren't great, but they were at least fun and enjoyable. And even the third was alright, even if it was entirely pointless. But they totally dropped the ball with this one. There's no delving into any of the mythology here, hell, there's hardly even any vampires at all other than Kate Beckinsale. They make up about 10 minutes of the movie, then, poof, they're gone. But there's tons of lycans, and the CGI on them looks particularly awful this time around.

The plot here is that humans have discovered the vampires and lycans, and seeing them as a disease to society, the humans go about trying to wipe them out. In some ways, the way the story's presented has sort of a Daybreakers vibe to it, only it's not as good or as clever, not to mention that it's the wrong vampire series that this movie should be shooting for.

So anyways, Kate Beckinsale gets frozen, wakes up 12 years later (supposedly, though everything looks exactly the same), and while trying to track down her lover, Michael, she finds her daughter instead, who winds up getting herself kidnapped by the bad guys. Insert more 'grr, take down the man, won't let them get away with this, yadda yadda yadda' nonsense, and that's basically the gist of it all. And considering what miniscule amount of plot that they gave us, they didn't even have the common courtesy to finish it off, opting instead for the totally bullshit cliffhanger ending. Hell, the first three all work as stand-alone movies, why couldn't this one, too?

But I just don't know what happened with this movie. I mean, sure, I don't expect that much from an Underworld movie, but I would like to see at least a little bit of effort put in! This is essentially just a 90 minute action sequence, only they don't have any fun with it this time around. It's not slick and sexy at all. In fact, I'd go so far as to say that watching this movie felt like watching a really bad Resident Evil movie, in terms of general quality. Now, I actually do enjoy the Resident Evil movies for what they are. However, this isn't supposed to be Resident Evil, this is Underworld. And I've come to expect significantly more from my Underworld movies than what this one has to offer.

So the quality just plummeted with this one, which was pretty disappointing. But the first three are all about on par with one another, and compliment one another so great. They're just such a good fit, but while this one feels like an odd combination of so many lesser movies, at no point does it ever actually feel like an Underworld movie. It's entirely unnecessary, and it just flat out doesn't belong. Not in this series, at least. And so, I choose to believe that it doesn't. Underworld: Awakening doesn't exist.
Posted by Chris Widdop at 12:03 PM