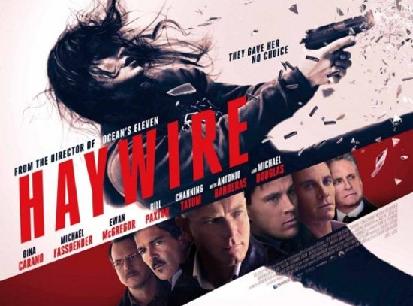 For having such an awesome cast, Haywire sure is a lackluster movie. And unlike the similar recent film Tinker Tailor Soldier Spy, the performances here do nothing to elevate an otherwise sub-par flick. Pretty disappointing, too, coming from Steven Soderbergh, who has a history of doing good things with exceptional ensembles.

Speaking of Soderbergh, I should mention that I went into this not realizing who directed it, but thinking that it really felt like one of his films. Low and behold, as the ending credits rolled, Soderbergh's named appeared on screen. So it definitely has the same style as most of his other works, and even has the same kind of odd musical choices that was present in Contagion, a choice that I'm still not certain exactly how I feel about it. But if you're into his work, then you may very well enjoy this movie more than I did. But me personally, it just didn't do much for me.

It took forever and a day to actually pick up and start being interesting. In the meantime, I was seriously considering just walking out, because I was not a fan of what we got. The first 20 minutes or so we don't know anything. The movie tells us nothing. We just hop from one unexciting action scene to the next, where the characters look more like they're casually jogging around the city as opposed to taking part in intense chase sequences. But the movie gives you no reason at all to care about these initial action scenes. Not to mention that I felt all of the fight scenes came across as rather silly, which didn't exactly help matters at all.

Pretty much, it's not until around the time that Michael Fassbender tags out of the movie that things finally pick up. Basically, our main character, Mallory, played by Gina Carano, is a private contract agent whose been double crossed and is out to set things right and exact revenge. And it's once this double cross happens that the movie finally gets going. It starts off with a rather impressive scene showing Mallory just walking through the city streets, until she realizes she's being followed. This pursuit was shot really well, and is probably my favorite part of the whole movie, though it's not without its own share of unintended silliness as well.

Concerning the cast, I suppose I can't complain about anyone's performance necessarily, other than maybe Bill Paxton, who may as well be reading his lines right off the script through most of the movie. But everyone else did fine, if nothing really noteworthy. And I suppose Gina Carano was pretty good, if a bit too inappropriately smiley-faced throughout much of the movie. But she's got such a beautiful smile that I can't rag on her too hard for that!

The character interactions is where this movie starts to crumble a bit. A lot of the relationships in this movie just feel very forced. For instance, Gina Carano and Channing Tatum's random hookup was an eye-roller. There's no buildup to it, and it doesn't have a lick of relevance to either the plot or their character development. Just completely random. And the random civilian who Mallory forces to drive her is just way too cool with the situation he's found himself in. He should be freaking out, yet he's calm as a butterfly. And not five minutes pass before the two fully and completely trust one another, which I just had the hardest time being able to buy.

But overall, I suppose this wasn't entirely a bad movie. I'd say it was okay, though it gets off to a really rough start, and a lot of the character interactions just feel so forced. Some people might be able to enjoy the fight scenes, which are shot in a more realistic manner than one might expect, but I was never able to take them too seriously. They all just felt so silly to me, which took me out of the movie. But eh, the more the movie progresses, there is some good to be had here, especially the ending in particular, which was quite satisfying.
Posted by Chris Widdop at 5:24 AM