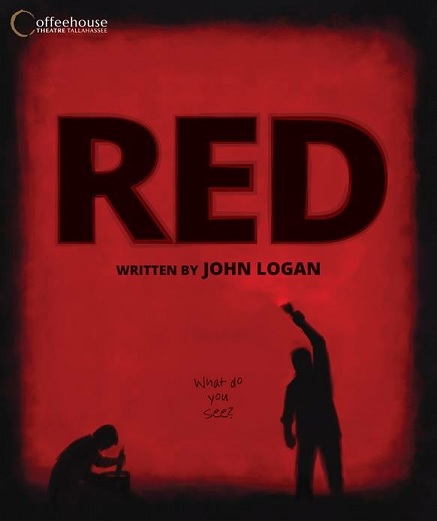 So I don't usually review stage productions, but I just can't help but express just how utterly impressed I was by Theatre Tallahassee's latest coffeehouse production of Red. And, seeing as I'm currently getting my own feet wet in a play for the first time as well, what better timing to take a look at this truly awe-inspiring production.

"What do you see? This is the central question posed in John Logan's Red. The play is an unflinchingly honest look at two artists at the dawn and twilight of their respective careers. We approached this play as a discussion of art. What makes great art? What makes it worthy of our time? What are the aspirations of the artist? While ultimately all of these questions are answered in the eye of the beholder, the conversation leading to these answers provides fascinating insight into the minds of our Artist Ken and Rothko."

First, I want to talk about the writing. This script is absolutely magnificent, a true thing of beauty. To say that it deals with the meaning of art doesn't even begin to do this writing justice, as it brings to light the subject matter in such a personal yet brilliantly conflicted manner. The debates that our two leads engage in are fascinating to behold, and the arguments brought to the table are the like that'll stick with you, that'll leave you pondering well after the show is over.

And that's the thing here. I've seen a number of plays in town, and for the most part, the most I could really say about any of them is they they were entertaining. But this one? Not only was it entertaining, but more so than that, it was truly thought provoking. In fact, the writing here astounded me so much that it left me wondering the deeper meaning behind my own currently silly screenplay that I'm working on, and I couldn't help but feel almost inadequate as a result. Not to confuse that for being a negative connotation, much the opposite, as the writing in this play actually inspires me to look upon and improve on my own craft.

But as impressed as I may have been with the writing, really, it's the actors who bring that writing to life that deserve the real praise here, and oh boy did they deliver. Red is a two man show, and to say that both Daniel Gray and Bo Smith were incredible is putting it mildly.

Now, for those of you who've followed me a while and may have seen some of my movies, then you should know I'm well acquainted with my friend Daniel, though I do try to go into these things leaving as much bias aside as I can. But I will say this, since his resurgence into acting a few years back, which also happened to coincide with his performance in my own first movie, Daniel has always been a standout performer, and has only continued to improve since, being the one actor most singled out as giving the best performance in both The Red Scarf and Breathe whenever anyone discusses the films with me, and he has similarly impressed consistently on the stage.

However, what he brings to his performance in Red is like nothing he's ever done before. For his performance as Mark Rothko, he underwent a complete transformation, and exuded a level of confidence that even I didn't know he was capable of. Daniel's always been a solid standout performer, but he's never really been given the chance to shine the way that he does here. And now, given the full spotlight, he completely ran with it and proved that, without a shadow of a doubt, he can carry a production and more than hold his own, much like he holds the audience in the palm of his hand, in a leading role. For the first time, I didn't feel like I was watching a friend who happens to be a good actor putting on a good performance. What I saw was a star, a true artist all his own, taking center stage and cementing his rightful place in this line of work. Daniel Gray truly became Mark Rothko.

And as for Bo, I'm not nearly so familiar with him, though I have seen him in other productions as well, and from what I recall, he, too, has always impressed. But again, something about this play just seems to bring out the best in people, and Bo, too, definitely elevated to another level in the role of Rothko's assistant, Ken. I overheard him speaking after the show about how emotional he became just reading the script, and that overflow of emotion definitely showed in his performance. Really, both Daniel and Bo killed it, and their chemistry was absolutely electric. Quite frankly, this is the kind of play that you could tell was extremely challenging, and yet even so, so seamless were their performances that those two went up there and proceeded to make this thing look easy.

Being a coffeehouse production, it's a smaller scale show, and yet even so, they definitely did the most with what they had to work with, including some inspiring lighting choices throughout to most fully drive the mood, and an on-going performance during the intermission where they continued to paint on stage. I seriously couldn't take my eyes off of them the whole time, just completely drawn in by the performance, even as people engaged in chatter all around me.

There was a lot of hype for this production going into it, but I've gotta say, what I saw far exceeded the expectations laid out for me. Incredible performances with an incredible script, all tightly directed and beautifully executed, Theatre Tallahassee's coffeehouse production of Red was truly a work of art worth taking a good hard look at. 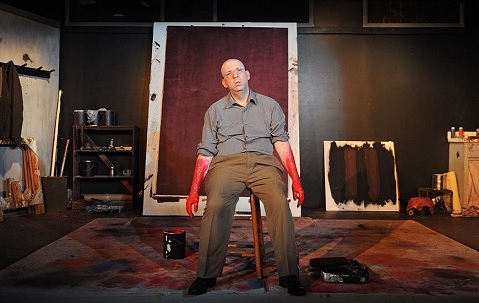