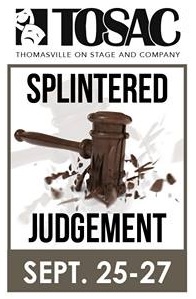 So after this past weekend, I suppose I can't use the line "I'm not an actor, I just play in all my movies" anymore.

It's sorta interesting how things work out. After wrapping up production on Breathe, I was actually jokingly complaining about how I was suddenly lacking a busy schedule and didn't know what to do with myself. Then, almost all at once, I got offered projects left and right from a number of people, several of which are still in various stages of planning, but one of those projects happened to be as an actor in the play Splintered Judgement.

Now, Splintered Judgement was my first time working on a stage production in any capacity, and I went into it looking at it as a challenge and an opportunity, and it turned out being quite an interesting experience at that. The story, written by Allie Howe, is a one act, single scene show with no intermission that plays in real time, as a jury prepares to depart after having just convicted a man, only for that very man to burst into the jury room, gun in hand, and proceed to hold the jury hostage after receiving a life sentence for a minor crime. And as the scene plays out, we learn more and more about each of these characters, the baggage they brought into the courtroom with them, and the screwed up ways how all of this and more can effect the judicial system.

It's a real interesting play, with tons of character depth, and a lot of thought provoking conversation, which only became more enlightening during our post-show Q&A sessions involving the audience. This was just such an interesting show to be a part of, and it's something I came away learning a lot, not only about the topic at hand, but about the whole process that goes into putting on a stage production in the first place.

For one thing, I'm more used to film, where we might rehearse maybe five minutes of footage at a time before going out and shooting it, however many takes it takes us to get it. But theater doesn't have the luxury of multiple takes, and so we had to learn to get it right all the way through, and get it right the first time. Rehearsals consisted of pretty much a solid month of us just running through the entire show start to finish, so by the time it was showtime, we all pretty much knew the whole thing front and back.

In fact, my character, Tim (which is still just a little bit weird being called this, as this is my brother's name), really didn't have too much dialogue, but what he did have were a number of single lines scattered about here and there, which meant that I had to constantly pay attention for my cues throughout. We did a "listening exercise" early on during rehearsals, and I kept that exercise well in mind throughout, reacting to everything else going on during all the time I had nothing else to contribute. And luckily, outside of a single moment during our final dress rehearsal performance in which I accidentally tripped Patsy Pallone, pulling her away from an ensuing cat fight, and thus became so flustered that I missed my next line (don't worry, we fixed this in time for showtime), I actually managed to hit my cues and remember my lines, so I'm pretty pleased with that.

Speaking of Patsy, who you all might remember from Dream Girl and Breathe, she's actually the one who surprisingly brought me onto this project, and then subsequently brought on Jason Simmons, and eventually the whole Simmons family including Leilani and Cheyenne, who I had also worked with on Breathe and who had all stepped up in a huge way here. So before I knew it, Team Widdop was in full force on this production, which was a pretty cool deal. And in fact, the whole cast and crew, which included Caleb Goodman, Victor Duncan, Ty Wold, Lenore and Bill Zuspan, and Areshia Stafford, was just an absolute pleasure to work with all around, and I'm sure I'll be working with many of them in future projects as well. 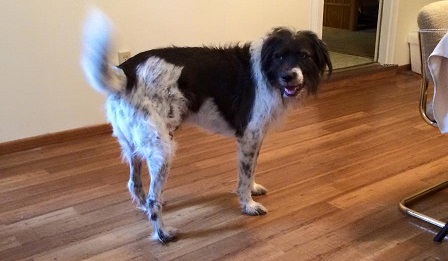 And lest we forget Parker!

And I kind of loved Byron Spires' direction as well. He started by giving us the freedom to just play our characters however we personally interpreted them, then tweaked things here and there as we went along. And he encouraged feedback from the cast, allowing us to really come together as a team. My character actually received quite a bit of drastic tweaking about halfway into our rehearsal schedule, which in the end apparently ended up coming across as being evil incarnate, at least according to one of our Q&A audiences. But really, my character was intended to just be a bit delusional, lost in his own world in his head with a false perception of his own capabilities, until he has a taste of reality near the end. (Oh yes, this also happens to be my second performance in a row in which I play a character who gets taken down by an angry man with a gun. Here's hoping I don't get typecast!)

But all throughout, I received nothing but compliments and encouragement, and as the play came more and more together, the more I just really was in awe and appreciation of the talent surrounding me. We weren't without our hiccups leading to showtime, but we managed to pull it all together and make this thing work. And as much an experience just practicing for the big show was, actually going out there and performing in front of an audience proved to be a whole different beast all its own.

We performed in front of a live audience at TOSAC in Thomasville, GA. And as I said before, we only got one shot to get it right, and if something went awry, we had to find a way to fix it on the spot and move on. And, yeah, things definitely got pretty interesting in that regard. For instance, while our first and final shows, as well as our previews, all had a pretty expected audience reaction, we were caught a bit off guard by our second show audience, who proceeded to turn our super serious play into a full blown comedy for one night only, laughing maniacally all throughout. And yeah, I could tell that this caught several of our cast off guard, but such pros that they all are they they quickly accommodated and even changed up their delivery just a bit to match this sudden shift in tone dictated by our audience.

It just goes to show how alive the theater can be, and really emphasizes how no two performances are the same. In fact, it's this very aspect that our lead, Caleb, kept mentioning as being the reason he loves the theater so much, and prefers it over film as a performer. And while I still personally very much prefer the captured preservation allotted by film, I can definitely see the appeal here.

So yeah, working on my first stage production, this was definitely an experience that I took quite a bit away from. And while I wouldn't be opposed to working on another play at some point, my passions do still very much lie in film, and so there I will be returning to soon enough. But I definitely hope to work with many in this cast and crew in the future, and Byron and Allie have already included me in their plans for their next film project moving forward as well, so we'll see where things continue to proceed from here. It's like I said in the beginning, it's sorta interesting how things have continued to work out.

I do think that this was definitely a wonderful experience for me personally, and I learned a lot as a performer, as one being on the receiving end taking direction, and I'll surely be bringing these experiences with me into future projects. And as a show, I think it's one that definitely deserves to be seen by a broader audience, as there's so much to think about and discuss about the legal system. But for those who did get a chance to see it, and to those who came up to me after the show with such kind words of appraisal, I give my utmost thanks to all of you.

And I also want to give thanks to Patsy for personally reaching out to me for this role, to Byron for having the faith in me to pull it off, and to the Simmons family for their continued support all throughout. Thank you to TOSAC for having us, and thank you to my awesome job for actually accommodating my schedule so that I could even be a part of this thing at all. And of course, a big thanks to the whole cast and crew for being such awesome people to work with. I keep saying it, but this was an experience I'll definitely be taking a lot away from, and I'm just honored to have been a part of it.