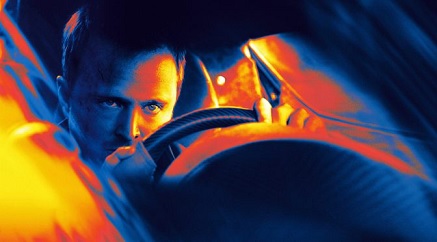 That's right, I'm about to be the guy who tears apart the universally lauded Captain America: The Winter Soldier, and then follows it up by praising the widely hated Need For Speed.

I wasn't originally intending to review this film, but after thinking on how little I've been reviewing movies as of late (which I could write a post about all its own), and how the last three movies to actually inspire reviews out of me were all negative, I figured I'd bring some positivity back to the site, and what better way than with a movie that I personally feel is one of the most fun and certainly the most underrated movie of the year so far.

After noticing its extended running time at a little under two and a half hours, I was a bit hesitant going into Need For Speed. However, as it turns out, the long run time is entirely unnoticeable, as the movie doesn't drag one bit, zooming by in a breeze. From start to finish, this thing is a blast to sit through, and gives those Fast and Furious movies a run for their money in this whole fast cars genre of action flicks.

I'm serious, too, I had more fun with this movie than I had at any of the Fast and Furious movies I've seen. This movie knows exactly what it is, and never tries to be anything else. The plot is a really simple revenge story, and one that exists to create as many excuses as necessary to keep our actors behind the wheel for as long as possible. I'd say at least 90% of the movie consists of driving, and boy are these scenes exhilarating.

I initially wondered how this movie would actually tie into the Need For Speed games, or if I was basically in for just another car flick that just used the license solely to cash in on the name recognition. However, the movie is surprisingly very faithful to the spirit of the source material, particularly the Hot Pursuit games. In addition to the high speed races, there's also several cop chases and the like in this thing that feel like they're pulled straight out of the games. And in the end, I'd say that this movie is up there among the better video game adaptations around.

What I also really appreciate is how this movie apparently insisted on orchestrating practical effects over CGI for a lot of the crashes and such throughout, and it shows. I don't mean to rag too hard on the Fast and Furious movies, because I do enjoy them for what they are, but let's face it, they are pretty silly, and at times are essentially cartoons, and the fact that there's so much obvious CGI in those things doesn't help their case. And I'm not saying that this movie doesn't get silly itself (the helicopter scene from the trailers is definitely the most "over the top" that it gets), but it's actually refreshing to know that all of those crazy stunts are actually happening on the screen, and you can really tell the difference.

As for the acting and all that, I really didn't have any objections there, either. I thought Aaron Paul made for a fine lead, and pretty much the whole supporting cast were all likeable as well. And Michael Keaton was just having a ball in this thing as the super enthusiastic internet commentator who organizes all of these "secret races".

Now, I did mention the running time before, and while I still think the pacing in this thing was surprisingly great, that's not to say that there aren't some scenes that probably could've been cut. Like the scene where a cop is chasing our stars through a gas station really doesn't end up feeling necessary at all in the end, and there's a streaking gag that ran just a little too long as well. So yeah, scenes like this coulda easily been cut to trim down the run time a little, but even so, their inclusion in the movie doesn't deter it too much anyways.

So yeah, I really enjoyed the hell out of this movie. It was completely entertaining throughout, always finding new ways to keep the constant driving thrilling and interesting. It may be based on a video game, but even as a pure car movie removed from its license, it still stands up among the best in the genre. I really don't understand all the hate this one somehow managed to generate, as, if you're a fan of the genre at all, then you'll find that there's a hell of a lot to appreciate with this movie.