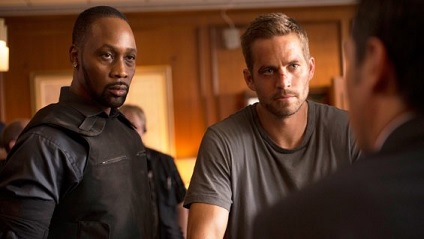 Man, and here I was thinking Divergent was a stupid movie. My lord, the stupidity on display in that movie has nothing on the sheer ludicrous level of idiocy that's present in Brick Mansions. To be perfectly blunt, there wasn't a single brain cell present during the production of this flick, and I fear that I may have lost several brain cells of my own while watching this thing.

In what I believe is supposed to be Paul Walker's last non-Fast movie, he plays, shock of all shocks, an undercover cop who is sent in to a closed off section of the city known as Brick Mansions in order to defuse a bomb. And along the way, shenanigans happen, and well known cold blooded murderers are left with Mr. Straight Laced Cop Paul Walker's support in their attempt to run for city mayor. Oh yeah, this shit gets stupid, but more on that later!

Also similar to Divergent in addition to its moronic writing, I also knocked against that movie for its unintentionally goofy use of parkour throughout. But, again, Divergent has nothing on the silliness of the parkour stunts put to work here in Brick Mansions. Now, to be fair to this movie, I did watch it only a week removed from The Raid 2 (which is, quite frankly, a masterpiece of action cinema), so watching this movie with that one still fresh in mind was a major disservice to it, and made it just that much harder than usual to take its action sequences seriously, where as if I were more distanced from The Raid 2, I might've been able to take it for what it was and appreciate it for being just some dumb and silly yet inoffensive action.

But even so, the action here is like this movie thought it was being so cool and so slick, yet these scenes are so oblivious to just how silly and impossible to take seriously they are. I was left chuckling all throughout, when I could tell that the intended reaction was something more akin to awe. Nope, the only awe-inspiring aspect this movie has to offer is the unfathomable depths of stupidity that it manages to delve to.

No, I really can't stress just how stupid this movie gets by the end, and after I walked out, I had trouble even attempting to describe to my friend the sheer amount of idiocy that I had just witnessed. I mean, pretty much until the big twist ending that flipped the movie on its head, I was willing to accept this as just a really cheesy but stupidly fun little action flick. But then the main villain, a drug lord played by the RZA, has a sudden and absolutely out of nowhere change of heart, as do each and every single one of his thugs working under him. And we're also suddenly supposed to buy them as being these heart felt "for the people" kinda human beings who are praised as genuine heroes that we, the viewer, are supposed to rally behind and support. All of this, as if we hadn't just spent the prior 80 minutes seeing these vile, awful people commit acts of cold blooded murder, kidnapping innocents for ransom, and on top of the rest of their drug-related schemes, actually threatening to level an entire city for money.

Yes, let me emphasize this for you, these are the heroes of this movie. And the movie even goes so far as to have Paul Walker, the good guy, have a turn around of his own and have their back in the end as well, supporting the drug lord RZA's run for mayor (no, I sadly wasn't joking about that before), and waving out at these thugs with a smile on his face as he drives by, as if they weren't just trying to shoot each other up all throughout the rest of this idiotic thing. I just... what? What?!

I still have a hard time really even thinking straight when it concerns this stupid freaking movie. Brick Mansions is unintentionally, unfathomably, unforgivably, and insultingly idiotic. So much so that I felt them paying respects to the late Paul Walker just before the credits rolled was actually kind of disrespectful coming after a movie such as this. Sure, Walker wasn't bad here, but my lord, if you want to see a good recent Paul Walker movie, for the love of god go see Hours instead. Nobody saw that movie, yet it was actually a genuinely good movie with a great performance from Paul Walker, which is far more than can be said for this shamefully awful thing.