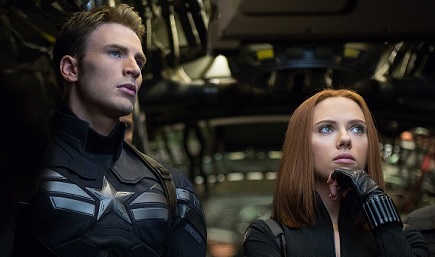 Bad joking aside, I honestly never would have expected the end to come with this movie, a movie that I was super hyped for due to how much I loved the first one. Well, this one didn't meet the hype, to say the least, and I'm disappointed to report that it's actually one of the weakest entries to come out of all these Avengers flicks to date.

Don't get me wrong, the movie isn't terrible. Certainly not as bad as Iron Man 2, at least. And all throughout, there's lots of little moments that really shine, mostly when things calm down and the focus shifts to smaller character interactions. Seeing Scarlett Johansson's character pushing Cap's buttons was pretty delightful, and the Cap's jabs he exchanges with newcomer the Falcon were among this movie's highlights. But outside a bit of fun dialogue in such moments, the rest of this thing isn't nearly so great.

In comparison, there's a moment involving Peggy, Cap's girlfriend from the first movie, that just feels completely forced and out of place. And, is it just me, or did the holographic council meeting give anyone else vibes of the Jedi Council? I dunno, not that it's necessarily a knock against the movie, but that did just sorta stand out to me. And taking that plus the plethora of Star Wars nods in Thor: The Dark World under consideration, can we expect to continue to see these nods to Star Wars in this post Disney-acquisition?

Tonally speaking, outside those few character moments mentioned above, this movie probably feels the least like a Marvel movie out of all of these movies to date. In fact, there were a number of occasions where I distinctly got the vibe that this movie was, for some reason, wanting to channel more of a Dark Knight tone instead (because that worked out so well for Man of Steel...), which, while not necessarily a bad thing, it did stand out to me quite a bit while I was watching.

But where this thing really fails big time for me is in the action sequences. And considering the sheer level of creativity that we got from the last Iron Man and Thor films, particularly in their action scenes, I was hoping for this movie to somehow continue that trend, but that was not to be. A lot of the fight scenes look like there's some interesting things happening, but yet they're shot so up-close and spliced together with so many quick cuts, it makes for a nauseating experience that's impossible to enjoy.

And as for the rest of this thing, well, for the most part, this movie ultimately boils down to being little more than a dull, boring, uninspired shoot-em-up. Seriously, there's not an inspired moment to be had here, and I was sitting there the whole time just waiting, dying for something a little more interesting that just more "shoot shoot, bang bang" to happen. But instead all I got were a bunch of action scenes that are quite frankly a chore to sit through, with their greatest aspect being the musical cues for when the Winter Soldier himself appears on screen.

So yeah, this one was a pretty big let down. I was a huge fan of the first movie, which, out of all of the first entries from the solo-Avengers flicks, is by far my favorite of the bunch. And considering how the last two Marvel movies did such a tremendous job in surpassing their preceding entries in every single regard, I supposed it's possible that I went into this thing with too high of expectations. But, alas, whatever those expectations may have been, they were not met, rather, I was met with what is actually one of the weakest Avengers movies to date. And, in fact, just for kicks, I'll go ahead and rank all the movies in order from favorite to least favorite to see how they stack up, and see how my ranking compares to your own:

So there you have it, my thoughts that are sure to be in the minority as it regards the latest Marvel flick. And, also to note, at the end of this movie, only about 10 people actually stuck around for the after credits scene, which kinda boggles my mind. I mean, are people really still that oblivious, or, at this point, do they just not care? (Not that there was anything actually interesting at the end this time around, but still...)