The Desolation of Smaug

So how about that ending, huh? But more on that later, first, let's talk about those elves. 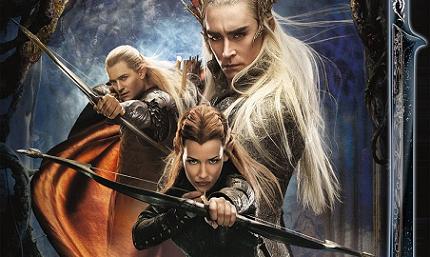 It was early on that I was beginning to have doubts about this second Hobbit flick, but from the moment the elves came on screen and throughout every scene including them afterwards, these bad asses would've been enough on their own to elevate this latest adventure through Middle Earth, making The Desolation of Smaug a far better outing than An Unexpected Journey in the process.

No, seriously, as awesome as Legolas was in the original Rings trilogy, he's on a whole new level this time around, and this time he's brought friends. Legolas and Tauriel completely steal this whole flick with their slick and stylized fights against the orcs throughout, not to mention that the love angle also including the dwarf Kíli is by far the most interesting sub-plot going on in this movie that's absolutely filled with a treasure trove of sub-plots. The chemistry between Aidan Turner and Evangeline Lilly was just so sweet, and I was also left constantly intrigued by how Legolas would react to their budding relationship throughout.

That is one other aspect that this movie has over the first, is that the large cast of characters are really fleshed out quite a bit more, and don't come across as the Fellowship-lite carbon copies that they felt like before. The characters actually have unique individualities that stand out this time around, which really helped in making me care about their fates and getting truly invested in their journey. However, that said, the one exception to this would be the title character himself, Bilbo Baggins.

I joked in my review of The Hobbit how it was a misleading title, seeing as Bilbo played mostly a side role compared to some of the other characters. And as sidelined as he was in the first movie, it's actually worse here. He's not treated like the star of this show at all, and hell, poor Martin Freeman couldn't even get top billing over Ian McKellen once the credits started to roll. And barely any of it is even shown from his point of view, outside of a handful of key scenes here and there. Unlike the first movie, they don't even cut to him to show his facial reactions to everything going on nearly as much. No, this is a movie that's so much bigger than the hobbit himself, to the point that, even though these movies are based on the book by that title, the main title of these movies just does not fit the finished product on display at all.

But that's perhaps a nit-picky little gripe, and one that probably shouldn't matter so much, so long as that finished product itself is still good, right? And well, for the most part it is, though the movie's not without its flaws. For one, yeah, it's long, but we all knew going in that this was gonna be. But the thing about this movie's length is that, unlike the Lord of the Rings movies, you can easily pick out the padding in this thing. As you're watching, you can see what parts could've been significantly condensed or, in some cases, entirely removed without actually losing anything of substance. But, again, this issue wasn't nearly as obvious here as it was in the first Hobbit, so again, it's an aspect that's at least been addressed to some degree. And I also found that there weren't nearly as many snarking opportunities this time around, either, which I suppose can also be seen as further evidence of the quality of this movie being an improvement over that of the last.

But anyways, now I really wanna talk about this movie's ending, so from this point forward, there's probably gonna be some spoilers. Now then, I loved this movie's ending. And what makes it really odd to me is that this isn't one of those cliffhangers where this part of the story has reached its conclusion, but we're still left with more to come, as has been the case in all the prior Rings flicks to date. Nope, this is one of those cliffhangers that ends the movie abruptly right in the middle of the action, cutting the story short just as some serious shit is about to go down, which is the type of cliffhanger that would usually annoy the hell out of me anytime else. But here, I just found the execution to be flawless, not to mention I got quite the kick out of how fitting it was for Peter Jackson to end this movie in the absolute most trollish way possible. 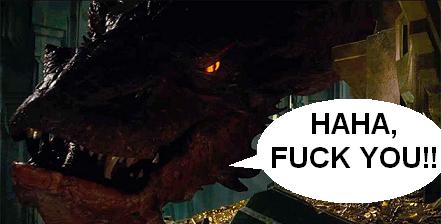 There was just something about those final moments leading up to that last shot, with Smaug getting the better of our heroes and heading off to unleash his havoc on the world, leaving our heroes absolutely hopeless to do anything about it, everything about this moment was built up so perfectly that the cut to black just struck me. And it wasn't in the way where it left me eagerly anticipating what's yet to come in the next Hobbit movie, either. It was in a way that instead left me wanting to go back relive this adventure from the beginning just to experience this culminating moment all over again. It's hard to explain, but there's just something so satisfying with the way this movie left us off in such a haunting manner. It was similar to my experience with the movie Prisoners in that regards, and stands alongside that movie as having quite possibly the most satisfying ending of any movie this year.

So yeah, while I wasn't exactly looking forward to seeing this movie, and I'm still not completely sold that this adaptation needed to be split into three movies, I was actually quite impressed with The Desolation of Smaug for the most part. It's an improvement on the first movie in several ways, featuring actual characters who are also fun to follow, awesome action scenes with awesome elves, and an expertly executed cliffhanger ending that'll leave you wanting to see it all over again. And yes, while I had my doubts going into this one, after the fact, I can honestly say that I am now more than ever looking forward to the next installment of The Hobbit.