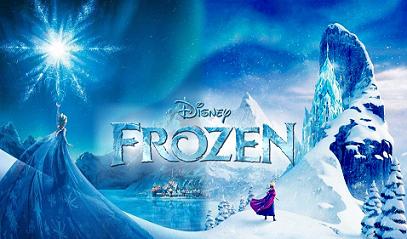 First Tangled, and now Frozen, Disney seriously needs to fire their marketing department, because they're clearly out to sabotage these movies. But I learned my lesson after Tangled and wasn't fooled by the awful looking trailers, and this movie did not disappoint. Filled with great music, fun characters, and stunningly gorgeous visuals, Frozen is another solid outing in Disney canon.

The story is about a young Princess, Elsa, who has the ability to turn things to ice. But after an accident with her younger sister, Anna, she's found it harder and harder to control this power. And so, in order to protect everyone around her, she chooses to hide this power, and basically shuts her sister out of her life. But after they grow up and Elsa becomes Queen, her secret is revealed and she flees in fear, and it's up to Anna to track her down and end the endless winter that Elsa has inadvertently created. Frozen really is a different sort of movie from the usual Disney norm, as our protagonists have to deal with some pretty emotionally complex issues the likes of which we don't usually see Disney try and tackle. In fact, for the good majority of the movie there really isn't even an actual villain here, and if anything, the villain would be the doubt and fear that presides within ourselves. I found the movie to be pretty surprising in this regard.

With this movie more than any other prior, it's become apparent that Disney is well aware of their typical tropes, and as such, they play on our expectations based on what we've come to usually expect from them, only to switch things up here and there and keep things from being completely predictable. For instance, I was initially put off by Anna wanting to marry a man whom she had just met, and I was worried that this was about to be one of those kinda Disney movies. But the movie was quick to swoop in and relentlessly reject this idea, which I was totally on board with. In fact, the way this movie approaches the whole idea of love in general was very well handled I felt, and a satisfying change of pace from the norm. So even as the movie does eventually catch back up with itself and begin to take more of a typical Disney mold near the end, they still manage to find ways to play on our expectations, which leads to some truly satisfying storytelling.

And the writing sinks all the way down to our characters, who are truly a fun cast to follow all around. The two Princesses are so unique from one another, yet you can definitely tell that they're siblings despite their differences. Elsa is more reserved, and only grows further yet regrettably distanced as she grows older, while Anna is the more outgoing type, who does share a few quirky similarities to Rapunzel. But they're both very likable in their own unique ways, and they both grow quite a bit throughout the duration of this film. And as they grow, they come across quite the cast of characters, all of whom play their part well and provide to the story.

Even the snowman, who's sole purpose really is little more than comic relief, was actually a fine addition here. I was certain going in that he was gonna grate on my nerves, but the comedy in this thing truly is very well implemented and works so well to compliment this movie, the snowman's contributions included. Seriously, I was left in hysterics on more than one occasion. This movie can be seriously funny, and the characters are genuinely charming in their own ways, which especially helps when it comes to the more emotional scenes, because this movie can also be quite stirring at that.

The last thing I need to discuss would be the music, which is a bit of a mixed bag here. Don't get me wrong, there are some extremely great songs in this thing. Both Anna's and Elsa's main themes are especially powerful tracks that'll really hit you hard in your seat, and continue to linger with you out of the theater. But on the contrary, there's also a handful of stinkers here that, while not terrible, really just kinda felt a bit too cheesy and didn't quite do it for me. Also, after a certain point it felt like this movie forgot that it was a musical, as there's a long extended period at the end that goes by without any more singing, and by the end, I was left really wanting to hear one more good hit, but it never did come. Now, I dunno if other Disney musicals have done anything similar to this, but if they did, it didn't stand out nearly as much as it does here, which was just a bit of a let down.

But that said, while the movie isn't without a few hiccups, I still thought this was a pretty solid outing overall. When the music is good, it's damn good, and either way, it's still a fun and charming movie all throughout regardless. With great characters in a beautiful setting and a story that's a little different from what we're used to, Frozen was quite a nice and satisfyingly moving film.