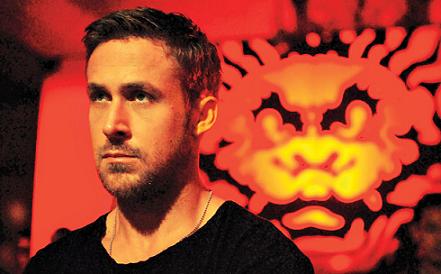 Director Nicolas Winding Refn returns with star Ryan Gosling with their first project together since Drive. However, it's quite possible that I hyped myself up a bit too much, as this new foray fell well short of expectations. Where as Drive might've been an instant classic, these two don't quite manage to strike lightning twice, as their latest movie, Only God Forgives, feels like a rather empty experience for the most part.

The plot is a pretty bare bones revenge story. Ryan Gosling's brother is killed, but due to complications in the matter, their mother, Kristen Scott Thomas, has to fly in and ensure that proper vengeance is taken care of. But standing in their way is Lt. Chang, a sword wielding cop who takes matters into his hands to enforce his own brand of justice. So it's pretty basic for the most part, as it churns along steadily enough to its conclusion that'll leave you going, "... Wait, that's it?"

Where as a movie like Drive has a gradual build to its sudden onslaught of violence, this one is relentlessly brutal from the get-go, and it doesn't let up to the very end. In fact, it got to the point where it felt like the movie was actually violent just for the sake of it at times. As I mentioned in Drive, the violence is built up to the point that it's shocking, and there's a real impact felt when it happens. We as the audience can very much relate to Carey Mulligan's character as she witnesses the brutality before her eyes, and there's a real gut-check as certain characters are killed off.

But here, the violence is treated like just an everyday occurrence, as we act as witness to a series of terrible events transpiring, with no one to really root for or get behind. It gets to the point where even a scene that should be shocking, such as a man completely gunning down a restaurant full of people, lacks any kind of weight behind it. And I suppose that you could say that this is the point of the movie, but it makes for a very shallow experience as a result.

Adding to the shallow feeling is the fact that, in addition to Ryan Gosling himself, just about everyone else is playing different variations of Gosling's quiet, reserved bad ass schtick. Hell, the only real character in this movie is the creatively foul-mouthed Kristen Scott Thomas, who is actually quite good in the role. Now, they do make attempts to add some layers of depth to these character, such as Lt. Chang's tendency to perform karaoke, in complete contrast to his otherwise serious demeanor. But where a role such as Gosling's worked so well at speaking volumes on the character without actually saying very much himself in Drive, here the character almost feels a bit contrived as a result.

In this movie we watch as Gosling deals with his jealousy and mommy issues in his bottled up manner, translating into issues with women in general, a trait he shares with his late brother, though the two went in polar opposite directions on the matter (their mother kinda messed these kids up a little). And there's also a fascination with hands throughout. For instance, as Gosling sits and watches a prostitute pleasure herself, he'll have his hands binded, holding himself back from what he might do, all the while showing us those possibilities as he fantasizes using his hands to either please or maim. But as the weapons ultimately responsible for all the violence in the movie, whether it be by pulling the trigger, wielding the sword, or just swinging a fist itself, I suppose it's fitting that hands are such a recurring image in this movie, and by contrast, as are their removal.

While the movie may feel rather hollow, the stylized way in which it's shot is pretty stellar. The lighting scheme and the use of colors is truly breath taking at times, and the clear way in which the action is shot is reminiscent to films from an older era, with the camera pulled back to really show off everything that's happening. And being accompanied by the haunting '80s style music feels fitting given the tone and atmosphere. There's even a scene that feels like it'd be right at home in one of those torture porn movies such as Saw, so the addition of a horror sounding soundtrack really works to this film's credit.

In the end, though, when the violence finally settles, I was left feeling quite underwhelmed. The movie's not bad, it's just that, despite its mild attempts at character depth here and there, there's very little meat to bite into narratively. So no matter how bloody and brutal everything gets, it just leaves you unfulfilled. But like I said, I honestly believe that that very well was the point of this movie, to drop us into this inhumane world of endless violence and bare witness with a sense of barbaric complacency that the characters on screen feel, basically asking of us to experience the opposite of my Carey Mulligan example above and to relate to the violence, rather than react to it. But the thing is, without any substance to back that violence up, I'm given little reason to care one way or the other about the actions taking place, which kinda defeats that whole point. So yeah, I was really hoping for this movie to blow me away like Drive did, so it's quite possible that I set myself up for disappointment here. Instead, what we got wasn't nearly as satisfying.