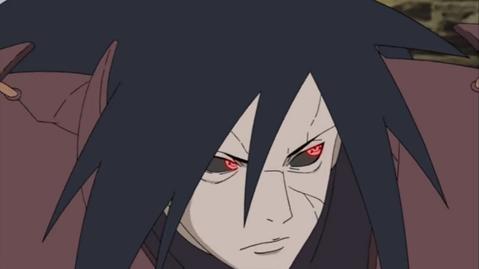 Going from one of the worst animated episodes in the series last week to one of the absolute very best this week, Naruto Shippuden 322, "Madara Uchiha", is another rare classic. It's episodes like this why I still even bother to keep up with the anime, on the rare occurrence that the source material is actually treated with respect, and the even rarer occurrence nowadays that this high quality level of animation is actually dedicated to a canon episode at that. Because when it happens, it's truly something special, and that's precisely what we got from Naruto Shippuden this week.

The real Madara was finally summoned into the war by Kabuto last week, and this week's episode was the first showcase of his raw power. With slick, fluid animation we witnessed as Madara single handedly took on the shinobi alliance. And what I especially loved was the level of creativity involved when he was in the thick of it. Scenes such as a ninja throwing a paper-bomb strapped to a kunai at him, only for him to catch the kunai, tear the paper-bomb off, toss the kunai back into its original owner, then slap the paper bomb onto another unsuspecting ninja and kick him away to blow up alongside his allies, is just the sheer level of genius that we could only wish we'd get more often from this series' animators.

But episodes such as this that are given the special treatment with top tier animators also have a tendency to let loose and take a few liberties. While most episodes are content with merely using the manga as a storyboard itself and animating the manga panels as they appear on the page (and oftentimes poorly at that), this is one that chooses instead to use what happened in the manga as an outline for their own better interpretation that truly utilizes the images to their full artistic potential in a nice, smooth presentation. And while they may not have gone as far as summoning an entire damn ocean, like they did in episode 167, the slight changes that enhanced the mood and setting to the benefit of the action were still very nice touches.

As a lone Madara faces off against the army of ninjas, the clouds move overhead, casting a dark shadow over the setting as the genuine feeling of despair sweeps over the shinobi alliance. And the scene where Madara summoned the meteor had a sincere sense of desperation to it, adding a weight that was very much lacking in the manga. Even knowing full well what was going to happen, the way the scene played out with Gaara and the Tsuchikage using all their might to stop the meteor as the alliance cleared the area gave me chills watching it. So while this episode might not have moved me to tears or anything, it's still the most emotionally stirring episode we've gotten since the Kyuubi flashback over a year ago.

There's just so many awesome touches to this episode that I could probably sit here writing all day about every little scene or detail that I loved, but I think you get the picture. So yeah, add 322 to the list of awesome, top tier episodes in the Naruto series. And the only bad thing about getting such high quality episodes is that we're almost certainly going to be returning to the normal, typically mediocre quality following this. But I hope it's not too much longer before we get this level of animation again, as I think it's possible that some of the more ridiculous aspects in the upcoming fight between Madara and the five Kages could be of great benefit with this level of care and creativity involved, which could definitely help fix some of the more idiotic moments to come. But I suppose we'll have to wait and see on that, and for now, just be glad about what we have now with this episode. A true classic that I'll be sure to revisit on countless occasions.