The Man With The Iron Fists 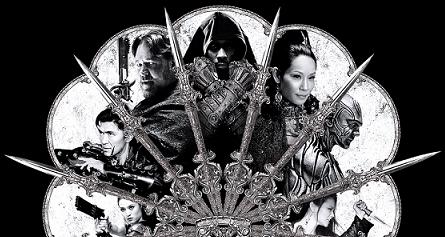 So the Wu-Tang Clan's RZA took a stab at making a martial arts film. Yet, despite his expertise in the culture, it didn't quite come together all that well. It certainly has its moments of brilliance, but it has just as many, if not more, missed marks that drag the film down and keep it from being as fun and satisfying an experience as it could have been.

It's a fairly basic story of a clansman's betrayal leading to a road of proposed warfare, dragging in three very different men from three very different backgrounds. First, a fellow clansman, in search of vengeance over his leader's murder. Then, a rambunctious Englishman who just so happens to be in town on vacation, seeking pleasure through violence. And lastly, a local blacksmith, who regretfully forged the weapons used to cause all this mess. And their roads ultimately lead them to a brothel, which acts as the central location for most of the film's more important affairs.

The acting is pretty decent enough for a film of this sort. Most of the actors appear to be having fun at least. Russel Crowe was a blast, stealing the show in every single scene, and Batista even impressed me a little with the charisma he brought to the screen. And Byron Mann, who plays the main villain, appears to be channeling Dave Chappelle's Prince character, but I got a kick out of him. RZA himself did a decent enough job narrating the film, though whenever he was actually on the screen, it almost felt like he was taking things too seriously, which sort of stood out in an otherwise somewhat silly movie. But for the most part, the characters are all handled well, and the movie even caught me off guard with the direction some of them took. At least twice we saw people who I expected to be villains actually turn out to be major protagonists, so in that sense at least the film wasn't entirely predictable.

Coming from RZA, I was hoping for the soundtrack to really kick all kinds of ass. But, sadly, that's not entirely the case. The soundtrack is awesome during the opening credits and in one or two other action scenes, which are accompanied by Wu-Tang Clan style rap beats. And I was hoping for more of this sound throughout, but for most of the film, they instead resort to typical fair that you'd come to expect from this type of movie, which was really just disappointing. And speaking of sound, this may be a bit nit-picky, but I did notice a few instances where the sound effects felt almost muffled, taking away some of the 'oomph' from the hits.

But in the end, this is a martial arts movie, so the most important thing this movie needs to get right is the martial arts action itself, right? But while the martial arts is definitely this film's strongest point, it also happens to be its weakest as well. The film has moments of brilliance when the camera pans out and lets the martial arts take center stage. But then, just moments later, they muddy it all up with extreme close-ups and quick cuts, ruining otherwise mesmerizing sequences and making them hard to watch at times. I also didn't think the movie was nearly as crazy as I was hoping for. It's certainly over-the-top and has its fair share of imagination, but it never feels like it showcases any of this imagination to its full potential. And while a lot of the bigger action scenes with loads of people involved last for a good minute, once we get down to the big final fights that the movie's been building up to, they all end far too quickly, ending the film with a disappointing series of anti-climaxes.

When the movie's not busy making us dizzy with quick cuts, the visuals do tend to have a very appealing look to them, particularly during said panned out scenes. However, the movie isn't quite as beautiful as it would like to believe it is. It just has a very artificial feel to it, like it's trying a bit too hard, but a lot of the environments and sequences are shot in an awkward style that sort of distorts the film's beauty, which happened to stick out to me.

But while it may seem like I'm tearing this movie a new one, I honestly didn't hate it. I found it enjoyable enough, and there was plenty to like here. Russel Crowe is the standout of the whole movie, and the villains were a whole lotta fun. And when we can actually see the action, it's definitely a thrill to watch. This movie had so much potential to be something awesome, but a few too many odd editing choices hold it back from greatness. So it wasn't all bad, but it was definitely an underwhelming experience.