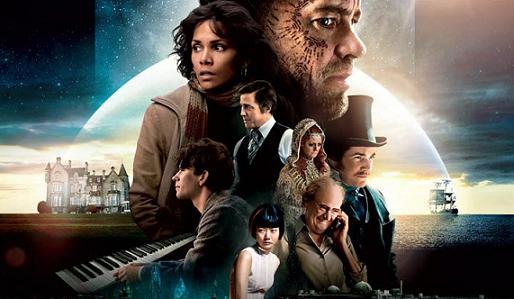 I went into Cloud Atlas knowing full well that this could have gone either way. Either it was going to be a convoluted train-wreck, or it was gonna be a work of art. I'm happy to report that it's very much the latter. Cloud Atlas is an extraordinary achievement, and a supremely powerful film, one that I truly felt a connection to. In fact, I can't remember the last time I was so thoroughly moved by a film. But the thing about it is, when it comes to talking about this movie, I really don't even know where to begin. It's just such a deep experience, and I'm certain that a lot of it flew right over my head. And while I'm not even sure that I can give this movie its proper justice, I'm gonna give it my best shot anyways.

It's a grand sci-fi epic spanning over the course of centuries, from the 1800s, to more modern times, and well into the distant world of the future, both pre- and post-apocalyptic. And all throughout, the movie constantly shifts back and forth through time, showing little bits and pieces at a time from these different periods. In most films I would likely find this format really jarring, yet that's never the case in this film. The editing is immaculate, every single shift makes sense and fits perfectly. And as we watch each story play out, we gradually see the movie's many themes begin to click into place.

Ultimately, this movie is about how everything is connected. How all of us are connected to one another and this world as a whole. It's about our past, our present, and our future as a people, and how the life that we live does not necessarily belong to only ourselves. And in this sense, it's also about cycles. The cycle of hatred, and how we continue to make the same terrible mistakes that alter the course of history for the worse. And the cycle of love, in all its many forms, be it destiny, unlikely companionships, and the ability to let go and sacrifice that love for the greater good. In both instances, the law of attraction is in full force, and, for better or worse, every single action leaves its mark on the world. And I just know that this movie is also about so much more that I could only catch a glimpse of, but all of these themes are explored so deeply and resonate on such a personal level. Hell, the movie opens by essentially showing you exactly how several of these storylines conclude, and yet despite this, I was still left with such a heavy, emotional gut-check of depression as well as tear-jerking levels of happiness once we caught back up in the end.

As for the time periods themselves, they all have a very distinct style. From the sea-faring expedition of the 1800s, to the more thriller-esque mystery attempting to be unveiled in the '70s. The dark and depressing musical narrative of the early 1900s, to the super stylized science fiction future, and the eventual fall of man back to barbaric times. In fact, the only storyline that feels even the slightest bit out of place would be the current day period, which sees a trouble-making publisher, played by Jim Broadbent, who finds himself locked in a nursing home which he must try to escape. The ongoing theme of changing one's fate is there, sure, but I can't help but feel like there's something more to this portion that I'm missing. And there was a particular line at the very beginning concerning the flashbacks and flashforwards in stories that definitely felt relevant. But even if it didn't quite seem to fit, these scenes were still very enjoyable, taking nothing away from the movie, and even managing to lighten the mood just a little, providing most of the humor in the movie.

Speaking of which, the movie is also very balanced as a whole with all of the different styles and genres it splices together. In addition to the aforementioned emotional factor, the action, humor, and drama is all implemented at all the perfect moments, with no one element ever overwhelming the movie. It's just a really well paced movie. At almost three hours in length, this movie is a breeze, which is refreshing in this day and age where I'm finding myself growing more and more tired of needlessly lengthy movies. It's a long movie, but not a single second is wasted, and at no point does it ever begin to drag.

The cast was all around really great. The movie uses an ensemble that is re-used in each of the different timelines, and I really appreciated that they didn't just essentially play the same character in each one. For instance, Tom Hanks has a tendency to be one of the main protagonist in most of his timelines. However, in at least a couple of them, he becomes the main villain (his character who we see briefly during the modern era is especially a treat to watch). And there are instances where actors might even play a character of different race or gender in different timelines, and a lot of these times you can't even recognize the actors at all. As the credits roll and they show all the characters who each actor played, there were several occasions where I honestly would have never guessed. The makeup and costuming in this movie is just absolutely astounding.

As the movie ended and the credits rolled, I just sort of sat there in stunned silence at what I had just witnessed. I was so moved that even just thinking about this movie after the fact has gotten me choked up at times. And as I mentioned before, I really haven't even scratched the surface with what this movie has to offer. Cloud Atlas is the kind of movie that almost makes me feel like an idiot when I try to sit down and analyze it, but everything was just so, so well done that, even though I'm sure I didn't quite get all of it, I was still able to walk away with a satisfying feeling of fulfillment. It certainly demands repeat viewings and thorough deconstruction to truly grasp this movie, and I definitely intend to revisit it.